Comments (0)
Add to wishlistDelete from wishlist
Cite this document
Summary
This paper under the headline "Because I Could Not Stop for Death by Emily Dickinson" focuses on the fact that the author likes the way Dickinson personifies death, whilst providing a critical analysis of the same. This poem talks about her in many ways.  …
Download free paperFile format: .doc, available for editing
HIDE THIS PAPERGRAB THE BEST PAPER94.2% of users find it useful 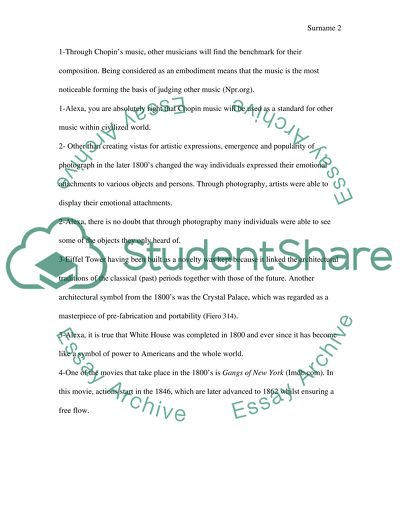 Dickinson indicates that children did not learn effectively (Dickinson).
Discussion

1-Through Chopin’s music, other musicians will find the benchmark for their composition. Being considered as an embodiment means that the music is the most noticeable forming the basis of judging other music (Npr.org).

1-Alexa, you are absolutely right that Chopin music will be used as a standard for other music within civilized world.

2-Alexa, there is no doubt that through photography many individuals were able to see some of the objects they only heard of.

3-Eiffel Tower having been built as a novelty was kept because it linked the architectural traditions of the classical (past) periods together with those of the future. Another architectural symbol from the 1800s was the Crystal Palace, which was regarded as a masterpiece of pre-fabrication and portability (Fiero 314).

3-Alexa, it is true that the White House was completed in 1800 and ever since it has become like a symbol of power to Americans and the whole world.

4-One of the movies that take place in the 1800s is Gangs of New York (Imdb.com). In this movie, actions start in 1846, which are later advanced to 1862 whilst ensuring a free flow.

4-Alexa, it is true that Gone with the Wind, was created in the 1800’s and it is a good movie linking good story and historical perspective. However, you have not stated how the link is enhanced.

5- “A Doll’s house” is a metaphoric name representing the obsession of reputations that men characters have leading to denying of women the desired autonomy. Nora character is relevant in the contemporary world as she represents women who have been denied autonomy (Ibsen).

President Clinton addressed an audience comprising clergymen and ministers. The buildup to this event was much hyped as the earlier statement made by the President before the independent Ken Starr counsel on August 17, 1998, was charged with perjury and deliberate obfuscation of truth. Moreover, the earlier speech did not mention Monica Lewinsky and her family – a form of non-renouncing apology, which is a rhetorical ploy to generalize one’s actions, in a bid to justify one’s wrongdoing in a noncommittal manner. Such an approach diminishes the graveness of the action for which an entire nation was ashamed of, not to mention the tremendous social and psychological damage it did to Monica Lewinsky and her family.

The play goes ahead to question whether kings do possess a heaven’s free pass. The theme of death in Shakespeare’s Hamlet, therefore, has an influence on the lives of living human beings (Bloom 45).
In Hamlet’s mind, the idea of death did not seem awful. However, despite the fact that he became obsessed with the notion, the afterlife uncertainty frightened Hamlet from committing suicide. Hamlet’s turning point took place at the scene of the graveyard in the fifth act of the play. It was before Hamlet became revolted and shocked by the living’s moral corruption. However, when he saw the skull of Yorick whom he loved and respected propelling, he realized that death does eliminate the differences th...
8 Pages(2000 words)Literature review
sponsored ads
Save Your Time for More Important Things
Let us write or edit the essay on your topic "Because I Could Not Stop for Death by Emily Dickinson" with a personal 20% discount.
GRAB THE BEST PAPER

Let us find you another Essay on topic Because I Could Not Stop for Death by Emily Dickinson for FREE!