Comments (0)
Add to wishlistDelete from wishlist
Cite this document
Summary
The two speeches, Elizabeth 1’s “Tilbury Speech” of 1558 and Shakespeare’s dramatization of Henry V’s “St Crispin’s Day Speech”, are considered as the most impactful and powerful speeches by the historians especially Elizabeth 1’s “Tilbury Speech,” which is called as “one of the jewels in the crown of England” (Green 421). …
Download full paperFile format: .doc, available for editing
HIDE THIS PAPERGRAB THE BEST PAPER93% of users find it useful 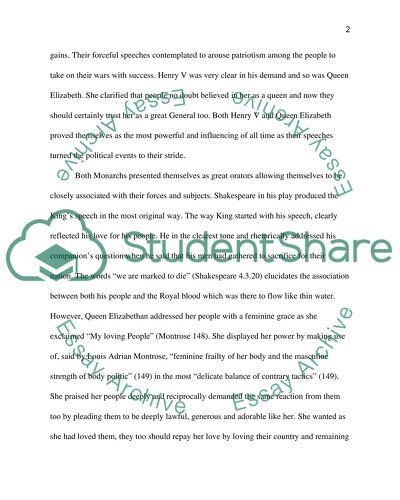 Extract of sample "Elizabeth Is Tilbury Speech of 1588 vs. Shakespeares dramatization of Henry Vs St Crispins Day Speech"

Download file to see previous pages Henry V’s “St. Crispin’s Day Speech” is the finest dramatic interpretation of that era reflecting the deep bond of the King with his subjects and “what leadership meant to the men in the Middle Ages” (Price, “St. Crispin’s Day Speech”). Same is the case with Elizabeth as her speech too manifested itself as the most influential among the subjects despite the fact that she was a female. Politically, both the Monarchs through their speeches intended to gain goodwill and support of their subjects rather than materialistic gains. Their forceful speeches contemplated to arouse patriotism among the people to take on their wars with success. Henry V was very clear in his demand and so was Queen Elizabeth. She clarified that people no doubt believed in her as a queen and now they should certainly trust her as a great General too. Both Henry V and Queen Elizabeth proved themselves as the most powerful and influencing of all time as their speeches turned the political events to their stride.
Both Monarchs presented themselves as great orators allowing themselves to be closely associated with their forces and subjects. Shakespeare in his play produced the King’s speech in the most original way. The way King started with his speech, clearly reflected his love for his people. He in the clearest tone and rhetorically addressed his companion’s question when he said that his men had gathered to sacrifice for their nation. The words “we are marked to die” (Shakespeare 4.3.20) elucidates the association between both his people and the Royal blood which was there to flow like thin water. However, Queen Elizabethan addressed her people with a feminine grace as she exclaimed “My loving People” (Montrose 148). She displayed her power by making use of, said by Louis Adrian Montrose, “feminine frailty of her body and the masculine strength of body politic” (149) in the most “delicate balance of contrary tactics” (149). She praised her people deeply and reciprocally demanded the same reaction from them too by pleading them to be deeply lawful, generous and adorable like her. She wanted as she had loved them, they too should repay her love by loving their country and remaining obedient towards her. Though there was a marked difference between the two speeches yet the most common element between the two was the humble way, with which the leaders showed their desire to their subjects. They were most willing to be the kith and the kin of their people and wanted to prove that they would always be with their people through any circumstances what might be. Elizabeth’s speech displays the threat from the enemies attack in the most aggressive way. Intimate and violent metaphors used show the intensity and depth of the speech, as if a foreign prince was attempting to rape her and her nation. Elizabeth identified the subtleties of her body with the geo-political boundaries of her land with the great rhetorical force whose voice directly entered into the people’s heart. But along with that, concern for her subjects was equally seen as she used the words “safety and careful” with great force. Particularly Shakespeare language presented King Henry’ ...Download file to see next pagesRead More
Share:
Tags
Cite this document
(“Elizabeth Is Tilbury Speech of 1588 vs. Shakespeares dramatization of Assignment”, n.d.)
Retrieved from https://studentshare.org/literature/1415194-elizabeth-is-tilbury-speech-of-1588-vs-shakespeares-dramatization-of-henry-vs-st-crispins-day-speech

CHECK THESE SAMPLES OF Elizabeth Is Tilbury Speech of 1588 vs. Shakespeares dramatization of Henry Vs St Crispins Day Speech

A Midsummer Night’s Dream is claimed to be derived from Shakespeare’s memories of two great festivities – May Day and Midsummer Eve. “May Day games, when the young people ran through the woods all night to gather boughs and flowers for the maypole (a custom that scandalized the Puritans), suggest the nocturnal hide-and-seek of Hermia, Lysander, Helena, and Demetrius. Midsummer Eve, the summer solstice was the time of “midsummer madness,” and maidens were supposed to dream, that night, of their true loves.”(Ferguson as cited in Burke 2006 p 301) Thus, with this as the historical and cultural background of the play, it is not difficult to conjure that the whole play will be delving into the...
6 Pages(1500 words)Essay

The play goes ahead to question whether kings do possess a heaven’s free pass. The theme of death in Shakespeare’s Hamlet, therefore, has an influence on the lives of living human beings (Bloom 45).
In Hamlet’s mind, the idea of death did not seem awful. However, despite the fact that he became obsessed with the notion, the afterlife uncertainty frightened Hamlet from committing suicide. Hamlet’s turning point took place at the scene of the graveyard in the fifth act of the play. It was before Hamlet became revolted and shocked by the living’s moral corruption. However, when he saw the skull of Yorick whom he loved and respected propelling, he realized that death does eliminate the differences th...
8 Pages(2000 words)Literature review
sponsored ads
Save Your Time for More Important Things
Let us write or edit the assignment on your topic "Elizabeth Is Tilbury Speech of 1588 vs. Shakespeares dramatization of Henry Vs St Crispins Day Speech" with a personal 20% discount.
GRAB THE BEST PAPER

Let us find you another Assignment on topic Elizabeth Is Tilbury Speech of 1588 vs. Shakespeares dramatization of Henry Vs St Crispins Day Speech for FREE!