Comments (0)
Add to wishlistDelete from wishlist
Cite this document
Summary
This research aims to evaluate and present Michael Sandel's critique of John Rawls' Theory of Justice. Sandel’s thoughts on Liberalism and the Limits of Justice are the most comprehensive and extensive critique of John Rawls’s Theory of Justice. …
Download full paperFile format: .doc, available for editing
HIDE THIS PAPERGRAB THE BEST PAPER98.3% of users find it useful 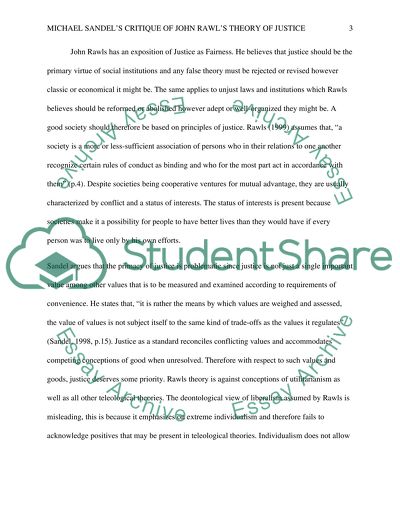 Download file to see previous pages The paper tells that John Rawls has an exposition of Justice as Fairness. He believes that justice should be the primary virtue of social institutions and any false theory must be rejected or revised however classic or economical it might be. The same applies to unjust laws and institutions which Rawls believes should be reformed or abolished however adept or well-organized they might be. A good society should therefore be based on principles of justice. Rawls assumes that, “a society is a more or less-sufficient association of persons who in their relations to one another recognize certain rules of conduct as binding and who for the most part act in accordance with them”. Despite societies being cooperative ventures for mutual advantage, they are usually characterized by conflict and a status of interests. The status of interests is present because societies make it a possibility for people to have better lives than they would have if every person was to live only by his own efforts. Sandel argues that the primacy of justice is problematic since justice is not just a single important value among other values that is to be measured and examined according to requirements of convenience. He states that, “it is rather the means by which values are weighed and assessed, the value of values is not subject itself to the same kind of trade-offs as the values it regulates”. Justice as a standard reconciles conflicting values and accommodates competing conceptions of good when unresolved. Therefore with respect to such values and goods, justice deserves some priority. Rawls theory is against conceptions of utilitarianism as well as all other teleological theories. The deontological view of liberalism assumed by Rawls is misleading, this is because it emphasizes on extreme individualism and therefore fails to acknowledge positives that may be present in teleological theories. Individualism does not allow the role of a community in making up a person. It also does not allow the potential of a person’s concise individuality being more of a matter of perception than choice. Rawls (1999) states that, “a set of principles are required for choosing among the various social arrangements which determine the division of advantages ...Download file to see next pagesRead More
Share:
Tags
Cite this document
(“Michael Sandel's critique of John Rawls' Theory of Justice Essay”, n.d.)
Retrieved from https://studentshare.org/literature/1399093-michael-sandels-critique-of-john-rawls-theory-of-justice
(Michael Sandel'S Critique of John Rawls' Theory of Justice Essay)
https://studentshare.org/literature/1399093-michael-sandels-critique-of-john-rawls-theory-of-justice.
“Michael Sandel'S Critique of John Rawls' Theory of Justice Essay”, n.d. https://studentshare.org/literature/1399093-michael-sandels-critique-of-john-rawls-theory-of-justice.
Comments (0)
Click to create a comment or rate a document

They are on trial and will be dealt with fairly. These laws ensure that no one, even if he or she has committed a crime is abused or punished cruelly.
Following the history of civilization like in china, we see the traces of systems for Criminal justice in order to provide safety for the citizens. Evolving through the years laws have been modified and changed to form the system that we know today.
From its start, the “U.S. criminal justice system” has advocated the idea of “checks and balances”. To avoid dictatorial rule, the people who founded this system in such a way that one person was not given control or authority completely to punish the criminals. The idea of assigning a ‘jury...
6 Pages(1500 words)Assignment
sponsored ads
Save Your Time for More Important Things
Let us write or edit the essay on your topic "Michael Sandel's critique of John Rawls' Theory of Justice" with a personal 20% discount.
GRAB THE BEST PAPER

Let us find you another Essay on topic Michael Sandel's critique of John Rawls' Theory of Justice for FREE!