Comments (0)
Add to wishlistDelete from wishlist
Cite this document
Summary
FBI National Security Branch Name: Institution: In June 2005, there was a presidential directive authorizing the attorney general to set up a National security service. The plan was implemented in September 2005 and by June 2006; Congress had approved the national security branch as part of the FBI organisation…
Download full paperFile format: .doc, available for editing
HIDE THIS PAPERGRAB THE BEST PAPER95.4% of users find it useful 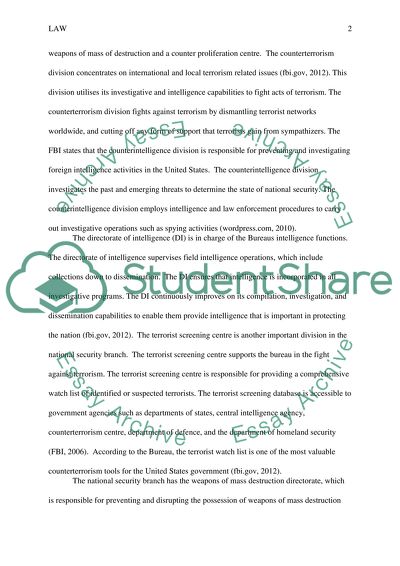 Download file to see previous pages According to the Federal Bureau of Intelligence, the NSB plays a critical role in protecting the United States against terrorist attacks, weapons of mass destruction, espionage, and foreign intelligence operations. The NSB mission ensures that the Bureau is in a position to perform its national security duties (FBI, 2006). The national security branch is made up of the counterterrorism division, counterintelligence division, and directorate of intelligence, terrorist screening centre, weapons of mass of destruction and a counter proliferation centre. The counterterrorism division concentrates on international and local terrorism related issues (fbi.gov, 2012). This division utilises its investigative and intelligence capabilities to fight acts of terrorism. The counterterrorism division fights against terrorism by dismantling terrorist networks worldwide, and cutting off any form of support that terrorists gain from sympathizers. The FBI states that the counterintelligence division is responsible for preventing and investigating foreign intelligence activities in the United States. The counterintelligence division investigates the past and emerging threats to determine the state of national security. The counterintelligence division employs intelligence and law enforcement procedures to carry out investigative operations such as spying activities (wordpress.com, 2010). The directorate of intelligence (DI) is in charge of the Bureaus intelligence functions. The directorate of intelligence supervises field intelligence operations, which include collections down to dissemination. The DI ensures that intelligence is incorporated in all investigative programs. The DI continuously improves on its compilation, investigation, and dissemination capabilities to enable them provide intelligence that is important in protecting the nation (fbi.gov, 2012). The terrorist screening centre is another important division in the national security branch. The terrorist screening centre supports the bureau in the fight against terrorism. The terrorist screening centre is responsible for providing a comprehensive watch list of identified or suspected terrorists. The terrorist screening database is accessible to government agencies such as departments of states, central intelligence agency, counterterrorism centre, department of defence, and the department of homeland security (FBI, 2006). According to the Bureau, the terrorist watch list is one of the most valuable counterterrorism tools for the United States government (fbi.gov, 2012). The national security branch has the weapons of mass destruction directorate, which is responsible for preventing and disrupting the possession of weapons of mass destruction capabilities and technologies. The National security branch created the WMD directorate in July 2006. The directorate deals with incidents that involve nuclear, biological, radiological and chemical weapons. The directorate employs intelligence to carry out investigations, develop countermeasures and drive preparedness that will ensure threats are prevented from becoming a reality. The FBI explains that the WMD directorate has a vision to eliminate the use of WMD. The directorate identifies and responds to WMD threats. The directorate cooperates with other law enforcement agencies to identify, and disrupt WMD operations (FBI, 2006). The Directorate supports the United States ...Download file to see next pagesRead More
Share:
Tags
Cite this document
(“FBI National Security Branch Essay Example | Topics and Well Written Essays - 750 words”, n.d.)
Retrieved de https://studentshare.org/law/1476811-fbi-national-security-branch
(FBI National Security Branch Essay Example | Topics and Well Written Essays - 750 Words)
https://studentshare.org/law/1476811-fbi-national-security-branch.
“FBI National Security Branch Essay Example | Topics and Well Written Essays - 750 Words”, n.d. https://studentshare.org/law/1476811-fbi-national-security-branch.
Comments (0)
Click to create a comment or rate a document

... different sources. The National Drug Intelligence center has the function to keep the policy makers updated with the new techniques and the new ways the drug traffickers would be using so that appropriate steps can be taken and the right planning can be done to cope with such issues. An example can be taken when the NDIC received information regarding the threat that the foreign drug traffickers from the Dominican Republic were trying to expand their illegal drug activities from New York to smaller states like Indiana, Ohio, Virginia and North Carolina. The NDIC passed on this information via letters to the local law enforcement agencies of the states to alert them. The NDIC also collects information from FBI, DEA, U.S. Customs Services...
8 Pages(2000 words)Essay

... terrorism. Hence understanding the criminal justice system is extremely important so that it may be implemented effectively and impartially. Hence, this report will also cover the following areas namely, the three levels of law enforcement in United States, the interaction between those agencies, the role of the police and private security personnel in homeland security, the role of this group in intelligence gathering and federal funding. Three levels of law enforcement: The three levels of law enforcement in the United States cover national, state and local security. This task of homeland security is the responsibility of the Federal Bureau of Investigation (FBI), the state police forces, and the local police force. Each of them has...
8 Pages(2000 words)Case Study

A local area of Ofsted provides this organization with a perfect opportunity to inspect children and young people and contribute much to develop social networks. The concept of social capital is a key concept, which determines the Coalition Government’s aspirations for a Big Society development. It is relevant to distribute power "from the state to society; from the center to local communities, giving people the opportunity to take more control over their lives" (An investigation into the delivery of Integrated Youth Support Services (IYSS) in England: Headline findings from quantitative data collection, July 2010). Youth organization works in three main directions: participation in education, employment, and training. Young...
6 Pages(1500 words)Coursework
sponsored ads
Save Your Time for More Important Things
Let us write or edit the essay on your topic "FBI National Security Branch" with a personal 20% discount.
GRAB THE BEST PAPER

Let us find you another Essay on topic FBI National Security Branch for FREE!