Comments (0)
Add to wishlist Delete from wishlist
Cite this document
Summary
CRIMINAL LAW Name: Institution: Facts Rachel and Monica paid a visit to the Pick and Run Supermarket when it was carrying out its close down sale. Monica bought a set of Kitchen knives, frying pan and a pair of scissors. When Monica and Rachel were on their way out of the supermarket, they met their friend Ross’ new girlfriend Charlie…
Download full paper File format: .doc, available for editing
HIDE THIS PAPERGRAB THE BEST PAPER93.7% of users find it useful 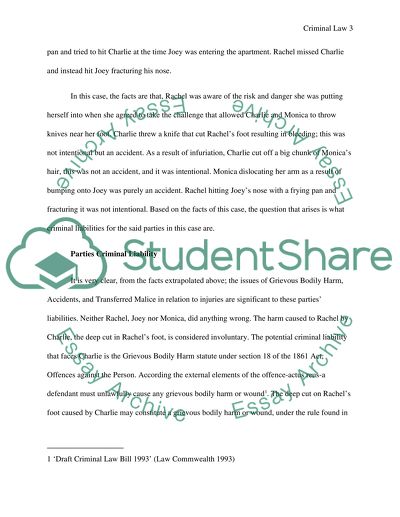 Download file to see previous pages Rachel would win the challenge if she did not move her foot. Rachel accepted the challenge. The game started and Charlie was the first to throw a knife which hit Rachel’s ankle resulting in a deep cut and started bleeding. Rachel shouted at Charlie that she would get back to her, if she wasn’t in much pain. Seeing what had happened, Monica shouted to Charlie wondering whether she was crazy. Monica then lamented that she could not believe that Charlie had cut Rachel’s foot and asked whether it was because she hated her since she used to date Ross who still loves her. These comments infuriated Charlie, who grabbed the pair of scissors lying on the table and cut a large chunk of Monica’s hair. Charlie raised her hand again holding the scissors and Monica thought that she was going to cut her again, and so she rushed out of the house. On her way out, Monica met Joey who had heard the commotion and had come to check what was going on. Bumping onto Joey, Monica fell on the floor dislocation the right wrist which she had previously injured a day earlier while playing tennis. Rachel grabbed the frying pan and tried to hit Charlie at the time Joey was entering the apartment. Rachel missed Charlie and instead hit Joey fracturing his nose. In this case, the facts are that, Rachel was aware of the risk and danger she was putting herself into when she agreed to take the challenge that allowed Charlie and Monica to throw knives near her foot. Charlie threw a knife that cut Rachel’s foot resulting in bleeding; this was not intentional but an accident. As a result of infuriation, Charlie cut off a big chunk of Monica’s hair, this was not an accident, and it was intentional. Monica dislocating her arm as a result of bumping onto Joey was purely an accident. Rachel hitting Joey’s nose with a frying pan and fracturing it was not intentional. Based on the facts of this case, the question that arises is what criminal liabilities for the said parties in this case are. Parties Criminal Liability It is very clear, from the facts extrapolated above; the issues of Grievous Bodily Harm, Accidents, and Transferred Malice in relation to injuries are significant to these parties’ liabilities. Neither Rachel, Joey nor Monica, did anything wrong. The harm caused to Rachel by Charlie, the deep cut in Rachel’s foot, is considered involuntary. The potential criminal liability that faces Charlie is the Grievous Bodily Harm statute under section 18 of the 1861 Act, Offences against the Person. According the external elements of the offence-actus reus-a defendant must unlawfully cause any grievous bodily harm or wound1. The deep cut on Rachel’s foot caused by Charlie may constitute a grievous bodily harm or wound, under the rule found in Eisenhower, the continuity of the whole skin be cut rule2. The deep cut on Rachel’s foot caused by Charlie can also be explained under really serious bodily harm as seen in the case DPP v Smith3, but would, however, be up to the jury. According to the mens rea4, for such a liability to accrue, there is a requirement that an act needs to be malicious and with intent. Charlie would most probably fall under section 18 of the 1861 Act, Offences against the Person, which does need intent or malice5. It may be argued that cutting someone’ ...Download file to see next pages Read More
Share:
Tags
Cite this document
(“CRIMINAL LAW Essay Example | Topics and Well Written Essays - 1250 words”, n.d.)
CRIMINAL LAW Essay Example | Topics and Well Written Essays - 1250 words. Retrieved from https://studentshare.org/law/1463126-criminal-law

CHECK THESE SAMPLES OF CRIMINAL LAW

New and complex issues have arisen which demanded fresh understanding and handling of cases involved them. This has resulted in the enhanced development of specialized laws e.g. cyber laws and interpretation of those laws. The same is true with Media Laws. Media has developed much in the last half-century. As it evolved as a profession and more people started to join it, there arose the levels of money involved in it. With this grew the contractual obligations on the parts of parties and concerned laws e.g. patent laws, privacy laws, and copyrights laws, etc. also started to play their parts. With these issues, the role of law in the media industry also reached a new height.
Mathew Fisher, the appellant, joined a band with Mr...
6 Pages (1500 words) Assignment
sponsored ads
Save Your Time for More Important Things
Let us write or edit the essay on your topic "CRIMINAL LAW" with a personal 20% discount.
GRAB THE BEST PAPER

Let us find you another Essay on topic CRIMINAL LAW for FREE!