Comments (0)
Add to wishlist Delete from wishlist
Cite this document
Summary
Actus Reus is the outward conduct element of the crime. The mental element necessary for a particular crime or the blameworthy state of mind that accompanies the act or conduct is called mens rea. Causation is one of the actus reus crimes. …
Download full paper File format: .doc, available for editing
HIDE THIS PAPERGRAB THE BEST PAPER92.5% of users find it useful 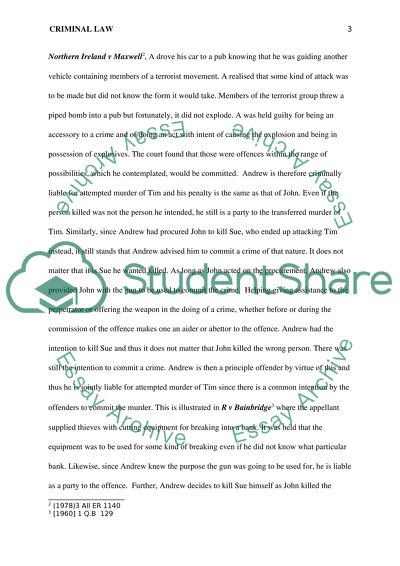 Download file to see previous pages When there are different parties to a crime, principle offenders are deemed to have contributed to committing the offence.
In this case Andrew decides to kill his wife Sue in order to be with Beth. He acts by hiring a hit man, John to do the work for him on some payment. In doing this, he acts as the counsellor. This is by encouraging, and inciting John to commit the crime and offering him money as payment for it. This makes him a party to the crime as a counsellor. A person who counsels or procures another person to commit a crime is a principle offender if the offence is actually committed. He is therefore liable for the same penalties as John as if he had committed the offence himself. It is immaterial whether the offence actually committed was the same as that counselled. Provided that the facts surrounding the offence committed are a probable or direct consequence of that counsel. For example in the case of Twelve v R , where a son procured a witchdoctor to kill is mother whom he believed was a witch and was responsible for killing his children. He believed that the witchdoctor would superficially kill his mother however; the witchdoctor killed her by shooting her on the back in her hut at night. The son was held to have been likely convicted of murder for having procured the witchdoctor to kill his mother. The means used was immaterial, guiding another person to commit a crime, makes one a party to the offence. For example in the case of DPP of Northern Ireland v Maxwell , A drove his car to a pub knowing that he was guiding another vehicle containing members of a terrorist movement. A realised that some kind of attack was to be made but did not know the form it would take. Members of the terrorist group threw a piped bomb into a pub but fortunately, it did not explode. A was held guilty for being an accessory to a crime and of doing an act with intent of causing the explosion and being in possession of explosives. The court found that those were offences within the range of possibilities, which he contemplated, would be committed. Andrew is therefore criminally liable for attempted murder of Tim and his penalty is the same as that of John. Even if the person killed was not the person he intended, he still is a party to the transferred murder of Tim. Similarly, since Andrew had procured John to kill Sue, who ended up attacking Tim instead, it still stands that Andrew advised him to commit a crime of that nature. It does not matter that it is Sue he wanted killed. As long as John acted on the procurement, Andrew also provided John with the gun to be used to commit the crime. Helping giving assistance to the perpetrator or offering the weapon in the doing of a crime, whether before or during the commission of the offence makes one an aider or abettor to the offence. Andrew had the intention to kill Sue and thus it does not matter that John killed the wrong person. There was still the intention to commit a crime. Andrew is then a principle offender by virtue of this and thus he is jointly liable for attempted murder of Tim since there is a common intention by the offenders to commit the murder. This is illustrated in R v Bainbridge3 where the appellant supplied thieves with cutting equipment for breaking into a bank. It was held that the equipment was to be used for some kind of breaking even if he did not know what particular bank. Likewise, since Andrew knew the purpose the gun was going to ...Download file to see next pages Read More
Share:
Tags
Cite this document
(“Criminal law Essay Example | Topics and Well Written Essays - 1750 words - 1”, n.d.)
Retrieved from https://studentshare.org/law/1403759-criminal-law

CHECK THESE SAMPLES OF Criminal law

They are on trial and will be dealt with fairly. These laws ensure that no one, even if he or she has committed a crime is abused or punished cruelly.
Following the history of civilization like in china, we see the traces of systems for Criminal justice in order to provide safety for the citizens. Evolving through the years laws have been modified and changed to form the system that we know today.
From its start, the “U.S. criminal justice system” has advocated the idea of “checks and balances”. To avoid dictatorial rule, the people who founded this system in such a way that one person was not given control or authority completely to punish the criminals. The idea of assigning a ‘jury...
6 Pages (1500 words) Assignment
sponsored ads
Save Your Time for More Important Things
Let us write or edit the essay on your topic "Criminal law" with a personal 20% discount.
GRAB THE BEST PAPER

Let us find you another Essay on topic Criminal law for FREE!