Weapons, Personal Protection and Use of Force - Essay Example

Comments (0)
Add to wishlist Delete from wishlist
Cite this document
Summary
The legislative body of the United States of America in the year, 1791 introduced second amendment according to which in 1791 “A well regulated militia, being necessary to the security of a free state…
Download full paper File format: .doc, available for editing
HIDE THIS PAPERGRAB THE BEST PAPER98.4% of users find it useful 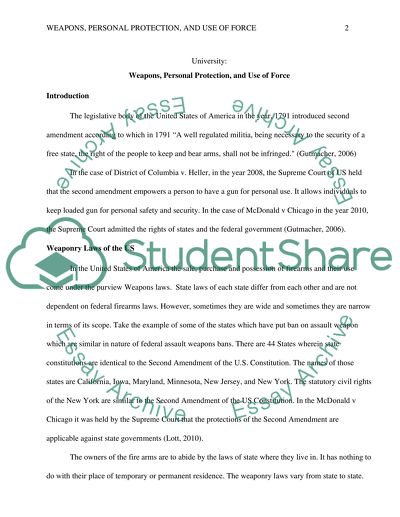 Extract of sample "Weapons, Personal Protection and Use of Force"

Download file to see previous pages Heller, in the year 2008, the Supreme Court of US held that the second amendment empowers a person to have a gun for personal use. It allows individuals to keep loaded gun for personal safety and security. In the case of McDonald v Chicago in the year 2010, the Supreme Court admitted the rights of states and the federal government (Gutmacher, 2006). Weaponry Laws of the US In the United States of America the sale, purchase and possession of firearms and their use come under the purview Weapons laws. State laws of each state differ from each other and are not dependent on federal firearms laws. However, sometimes they are wide and sometimes they are narrow in terms of its scope. Take the example of some of the states which have put ban on assault weapon which are similar in nature of federal assault weapons bans. There are 44 States wherein state constitutions are identical to the Second Amendment of the U.S. Constitution. The names of those states are California, Iowa, Maryland, Minnesota, New Jersey, and New York. The statutory civil rights of the New York are similar to the Second Amendment of the US Constitution. In the McDonald v Chicago it was held by the Supreme Court that the protections of the Second Amendment are applicable against state governments (Lott, 2010). The owners of the fire arms are to abide by the laws of state where they live in. It has nothing to do with their place of temporary or permanent residence. The weaponry laws vary from state to state. The State of Florida allows an individual to carry concealed weapons and firearms. In many states, an individual is not allowed to carry out firearms therefore, it is necessary to check the state laws of weapons where one intends to visit (Lott, 2010). In so many states of US, firearms laws are restrictive and have no comparison with federal firearms laws. However, the state and local police are not legally bound to comply with federal weaponry laws (Lott, 2010). Personal Protection Eligibility Criteria In order to possess firearms for personal safety and security, the US citizen has to meet the following requirement (Eligibility Requirements for a License to Carry Firearms): legal resident 21 years of age No outstanding warrant No current restraining order / suspension / surrender order No confinement for drug addiction or for use of alcoholism. In case of cured for addiction / alcoholism, submit registered physician certificate No confinement to hospital for mental illness. On rehabilitation, an individual has to submit a certificate from registered physician that now he or she is fit for use of firearms in his or her self defense Permanent disqualifiers are those offenses who are punishable for more than 2 years of imprisonment. Personal protection as per US law is a complex right. On the one hand, it gives honors to the inherent rights of a citizen to keep and use firearms for personal safety and security. The provision of firearms to each and every citizen has shaken the faith and confidence of the citizens in the rule of law. The issuance of firearms license means that the states or federal government absolved from its first and foremost responsibility to maintain law and order in their administrative jurisdiction. By virtue of given right, one can take his or her revenge from any other person or to intimidate someone with the use of firearms to settle his or her score (Mauser, 1996). However, use of firearms for personal protection can be differentiated from all other reasons of using firearms. Personal protect ...Download file to see next pages Read More
Share:
Tags
Cite this document
(“Weapons, Personal Protection and Use of Force Essay”, n.d.)
Retrieved from https://studentshare.org/law/1447431-weapons-personal-protection-and-use-of-force

(Weapons, Personal Protection and Use of Force Essay)
https://studentshare.org/law/1447431-weapons-personal-protection-and-use-of-force.

“Weapons, Personal Protection and Use of Force Essay”, n.d. https://studentshare.org/law/1447431-weapons-personal-protection-and-use-of-force.
Comments (0)
Click to create a comment or rate a document

CHECK THESE SAMPLES OF Weapons, Personal Protection and Use of Force

Vis-a-vis the burden of the prosecution of proving the elements of the offense, there is the set of human rights to which the suspect is entitled and which must be respected by the police having custody of the suspect. These human rights range from the investigation stage to that of the trial stage of the criminal prosecution process and are provided partly by the conventions of the Human Rights Act of 1998. [The Stationery Office, 1998]
There is a great difference in law between the fundamental rights and liberties of individuals and the enforceability of rights and safeguards. The safeguards could only be made available through legislation and the provision of sufficient resources to give meaning thereto as well as make the...
11 Pages (2750 words) Research Proposal

In particular, the impact of the digital revolution and the growth of numerous multimedia streams on cultural norms has challenged classical theory propounding the fu...
14 Pages (3500 words) Article
sponsored ads
Save Your Time for More Important Things
Let us write or edit the essay on your topic "Weapons, Personal Protection and Use of Force" with a personal 20% discount.
GRAB THE BEST PAPER

Let us find you another Essay on topic Weapons, Personal Protection and Use of Force for FREE!