Loitering in Terms of the Criminal Law - Assignment Example

Comments (0)
Add to wishlist Delete from wishlist
Cite this document
Summary
This assignment overviews the concept of loitering in terms of criminal law and particularly in terms of the first amendment of the constitution that protects the due process clause, “freedom to loiter for innocent purposes” which intended that gangs were prevented from possessing dominion. …
Download full paper File format: .doc, available for editing
HIDE THIS PAPERGRAB THE BEST PAPER93.4% of users find it useful 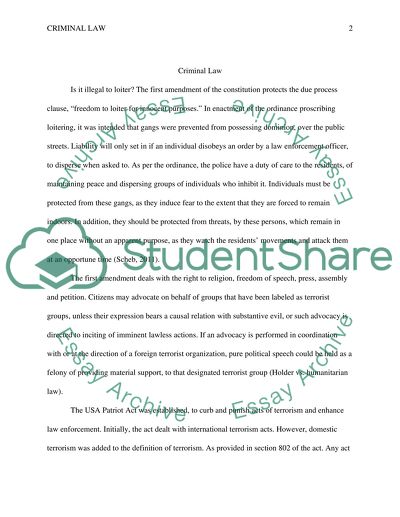 Extract of sample "Loitering in Terms of the Criminal Law"

Download file to see previous pages The assignment "Loitering in Terms of the Criminal Law" talks about the first amendment of the constitution that refers to the loitering and protects the due process clause "freedom to loiter for innocent purposes".
In enactment of the ordinance proscribing loitering, it was intended that gangs were prevented from possessing dominion, over the public streets. Liability will only set in if an individual disobeys an order by a law enforcement officer, to disperse when asked to. As per the ordinance, the police have a duty of care to the residents, of maintaining peace and dispersing groups of individuals who inhibit it. Individuals must be protected from these gangs, as they induce fear to the extent that they are forced to remain indoors. In addition, they should be protected from threats, by these persons, which remain in one place without an apparent purpose, as they watch the residents’ movements and attack them at an opportune time.
The USA Patriot Act was established, to curb and punish acts of terrorism and enhance law enforcement. Initially, the act dealt with international terrorism acts. However, domestic terrorism was added to the definition of terrorism. As provided in section 802 of the act. Any act that endangered human life, was a form of domestic terrorism. Despite criticisms on the provisions of the act, it provided determent against terrorism at the best interest of the citizens, if the terrorists actions, were intended to guide government’s policy, by intimidation or coercion....
tained, so as to help in supporting, conducting or concealing an act of terrorism and more so, if the property is derived from, involved in, or used to commit an act of terrorism. An assertion of a probability, of believing that an individual or an entity has committed terrorism against the country, residents or their property; calls for action and as such, any provision permitting the government to curb and punish such acts is not unconstitutional. If a person negligently fails to perform his duty of care, he/ she will be liable for damages. However, the plaintiff ought to prove beyond reasonable doubt, that he suffered loss as a result of the defendant’s negligence. Secondly, he must prove that he was within the scope of that duty, and lastly, prove that there was breach of duty, and as such, fair and reasonable to impose liability. The state statute will be held void for vagueness if it fails to justify the three conditions (Scheb, 2011). Courts are justified by all means, to impose a requirement that prosecutors prove the defendant’s intent to escape. Escape is the voluntary departure from custody. It is justified as escape, if without permission, the defendant, voluntarily leaves custody with intent to avoid confinement. Prosecution must prove that the defendant had no intent to leave and not to return. As such, intent would be held as proof of the crime of escape. In addition, the prosecution can bring forth evidence of threats and violence, as the cause for the action taken, which the jury considers. In such cases, the conditions necessitating the defendant’s departure must be relatively mild and alternative remedies such as consulting the wardens, put into consideration. The general principle, “justification by choice of lesser evil” provides that the ...Download file to see next pages Read More
Share:
Tags
Cite this document
(“Loitering in Terms of the Criminal Law Assignment”, n.d.)
Loitering in Terms of the Criminal Law Assignment. Retrieved from https://studentshare.org/law/1446428-loitering-in-terms-of-the-criminal-law

CHECK THESE SAMPLES OF Loitering in Terms of the Criminal Law

New and complex issues have arisen which demanded fresh understanding and handling of cases involved them. This has resulted in the enhanced development of specialized laws e.g. cyber laws and interpretation of those laws. The same is true with Media Laws. Media has developed much in the last half-century. As it evolved as a profession and more people started to join it, there arose the levels of money involved in it. With this grew the contractual obligations on the parts of parties and concerned laws e.g. patent laws, privacy laws, and copyrights laws, etc. also started to play their parts. With these issues, the role of law in the media industry also reached a new height.
Mathew Fisher, the appellant, joined a band with Mr...
6 Pages (1500 words) Assignment
sponsored ads
Save Your Time for More Important Things
Let us write or edit the assignment on your topic "Loitering in Terms of the Criminal Law" with a personal 20% discount.
GRAB THE BEST PAPER

Let us find you another Assignment on topic Loitering in Terms of the Criminal Law for FREE!