Defining the Evolution of Duties Among Social Workers - Essay Example

Comments (0)
Add to wishlistDelete from wishlist
Cite this document
Summary
This paper presents the social welfare system which is one which continues to alter and change according to government policies and initiatives which are taken. This is followed by values and ethical principles which reformat the expectations within social work. …
Download full paperFile format: .doc, available for editing
HIDE THIS PAPERGRAB THE BEST PAPER92.3% of users find it useful 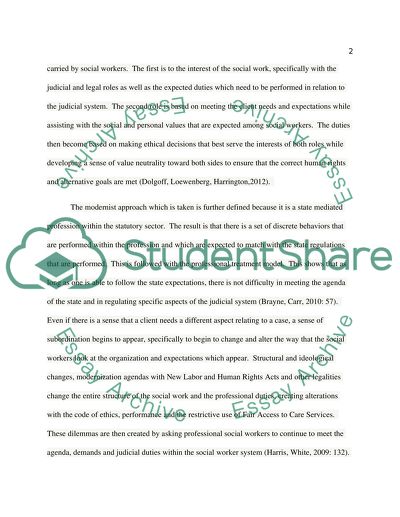 Extract of sample "Defining the Evolution of Duties Among Social Workers"

Download file to see previous pages As the essay declares the changes which are made through the social welfare system change levels of accountability as well as legal approaches taken to working with others. The alterations made through each of these continue to evolve, specifically because of cases associated with rights as well as actions taken for or against social workers. Examining the various roles and how these have altered in recent years for social workers then creates a deeper understanding toward the current expectations of those within the social justice system.
According to the report findings the professional mix which is created for those working as a professional social worker continues to alter because of regulations and policies which are implemented. The alterations are specific to finding innovative ways and measures of working with other professionals as well as with the duties which are expected by workers. It is noted that there are dual roles which are carried by social workers. The first is to the interest of the social work, specifically with the judicial and legal roles as well as the expected duties which need to be performed in relation to the judicial system. The second role is based on meeting the client needs and expectations while assisting with the social and personal values that are expected among social workers. The duties then become based on making ethical decisions that best serve the interests of both roles while developing a sense of value neutrality toward both sides to ensure that the correct human rights and alternative goals are met. (Dolgoff, Loewenberg, Harrington,2012). The modernist approach which is taken is further defined because it is a state mediated profession within the statutory sector. The result is that there is a set of discrete behaviors that are performed within the profession and which are expected to match with the state regulations that are performed. This is followed with the professional treatment model. This shows that as long as one is able to follow the state expectations, there is not difficulty in meeting the agenda of the state and in regulating specific aspects of the judicial system (Brayne, Carr, 2010: 57). Even if there is a sense that a client needs a different aspect relating to a case, a sense of subordination begins to appear, specifically to begin to change and alter the way that the social workers look at the organization and expectations which appear. Structural and ideological changes, modernization agendas with New Labor and Human Rights Acts and other legalities change the entire structure of the social work and the professional duties, creating alterations with the code of ethics, performance and the restrictive use of Fair Access to Care Services. These dilemmas are then created by asking professional social workers to continue to meet the agenda, demands and judicial duties within the social worker system (Harris, White, 2009: 132). The changing government regulations then meet with the expectations for codes of ethics that are defined for social workers. It is noted that there are two sets of ethics that are defined among social workers, including principle based and virtue based. The principle based comes with the judicial system, specifically which identifies each social act creating expectations and alterations to those that are going through the justice system. The judicial system regulates concepts such as human ...Download file to see next pagesRead More
Share:
Tags
Cite this document
(“Defining the Evolution of Duties Among Social Workers Essay”, n.d.)
Defining the Evolution of Duties Among Social Workers Essay. Retrieved from https://studentshare.org/law/1443679-2-identify-and-analyse-the-duties-held-by-a-social-worker-as-a-professional-a-statutory-agent-and-an-employee-of-a-local-autho

Erving Goffman was an astute observer of society, who immersed himself in the social environment which he was studying. He carefully observed and recorded the ways in which people’s behavior and interpersonal interactions are carried out in everyday life. He notes that “people perform their social roles and, as they do so, they produce social order through their actions and the regu...
6 Pages(1500 words)Article
sponsored ads
Save Your Time for More Important Things
Let us write or edit the essay on your topic "Defining the Evolution of Duties Among Social Workers" with a personal 20% discount.
GRAB THE BEST PAPER

Let us find you another Essay on topic Defining the Evolution of Duties Among Social Workers for FREE!