Comments (0)
Add to wishlist Delete from wishlist
Cite this document
Summary
Legal Issues being tackled in the media today: Alabama Immigration Law Introduction A prominent issue that hugged the headlines recently will go down in history as one of the most tenacious Anti-Immigration Bills ever written in the United States (Fausset) known as the "Beason-Hammon Alabama Taxpayer and Citizen Protection Act", or simply referred to as the Alabama House Bill 56 (Act)…
Download full paper File format: .doc, available for editing
HIDE THIS PAPERGRAB THE BEST PAPER95.9% of users find it useful 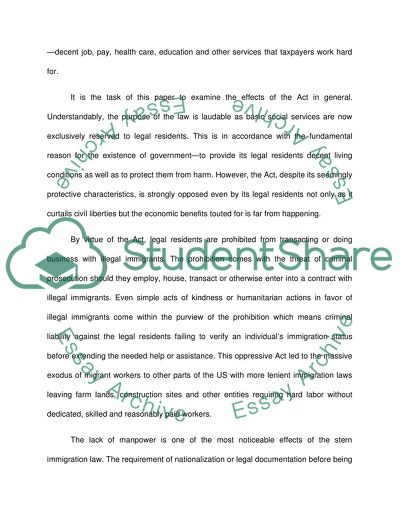 Download file to see previous pages Hence, illegal immigrants even though not entitled to public benefits are given equal access for the simple reason that there is presumption that they are present in the US legally. The main thrust of the Act is to give jobs and services where these are due—particularly US citizens—to satisfy their needs before illegal aliens. It is also intended to create a fair living environment for legal citizens and immigrants whom must be accorded sole access to the basic necessities and to live the American dream, namely—decent job, pay, health care, education and other services that taxpayers work hard for. It is the task of this paper to examine the effects of the Act in general. Understandably, the purpose of the law is laudable as basic social services are now exclusively reserved to legal residents. This is in accordance with the fundamental reason for the existence of government—to provide its legal residents decent living conditions as well as to protect them from harm. However, the Act, despite its seemingly protective characteristics, is strongly opposed even by its legal residents not only as it curtails civil liberties but the economic benefits touted for is far from happening. By virtue of the Act, legal residents are prohibited from transacting or doing business with illegal immigrants. The prohibition comes with the threat of criminal prosecution should they employ, house, transact or otherwise enter into a contract with illegal immigrants. Even simple acts of kindness or humanitarian actions in favor of illegal immigrants come within the purview of the prohibition which means criminal liability against the legal residents failing to verify an individual’s immigration status before extending the needed help or assistance. This oppressive Act led to the massive exodus of migrant workers to other parts of the US with more lenient immigration laws leaving farm lands, construction sites and other entities requiring hard labor without dedicated, skilled and reasonably paid workers. The lack of manpower is one of the most noticeable effects of the stern immigration law. The requirement of nationalization or legal documentation before being accepted for employment ushered economic slowdown instead of a booming economy. According to an article published by the Immigration Policy Centre entitled "Bad for Business: How Alabama's Anti-Immigration Stifles State Economy", the new law has already caused untold hardship for Alabama's business and citizens. Alabama is predominantly an agricultural state that employs a large amount of labor force. (American Immigration Council) Callous hands and people willing to get their hands dirty are conditions for employment. In 2010 alone, unauthorized immigrants comprise 4.2% or 95000 workers; (American Immigration Council) and as a result of the new law, undocumented residents have crippled the operation of local businesses as they had to flee to other places for the fear of getting caught. Interestingly, one of the main purposes of the Act is to provide employment for unemployed Americans however its valiant purpose is defeated as only few Americans have signed up to take the ...Download file to see next pages Read More
Share:
Tags
Cite this document
(“Alabama Immigation Law Essay Example | Topics and Well Written Essays - 1250 words”, n.d.)
Alabama Immigation Law Essay Example | Topics and Well Written Essays - 1250 words. Retrieved from https://studentshare.org/law/1436293-legal-issues-being-written-int-he-media-today-as

New and complex issues have arisen which demanded fresh understanding and handling of cases involved them. This has resulted in the enhanced development of specialized laws e.g. cyber laws and interpretation of those laws. The same is true with Media Laws. Media has developed much in the last half-century. As it evolved as a profession and more people started to join it, there arose the levels of money involved in it. With this grew the contractual obligations on the parts of parties and concerned laws e.g. patent laws, privacy laws, and copyrights laws, etc. also started to play their parts. With these issues, the role of law in the media industry also reached a new height.
Mathew Fisher, the appellant, joined a band with Mr...
6 Pages (1500 words) Assignment
sponsored ads
Save Your Time for More Important Things
Let us write or edit the essay on your topic "Alabama Immigation Law" with a personal 20% discount.
GRAB THE BEST PAPER

Let us find you another Essay on topic Alabama Immigation Law for FREE!