Comments (0)
Add to wishlistDelete from wishlist
Cite this document
Summary
Motivational Methods Paper Name: Instructor: Task: Date: Scots Law Advising Ikant on Problem A In this problem, it is essential to examine the various underlying aspects. The company should, first, analyze the relationship of the agent with the company. Thereafter, it should put into focus; how much power does Ikant or its managers possess over Fergus…
Download full paperFile format: .doc, available for editing
HIDE THIS PAPERGRAB THE BEST PAPER97.1% of users find it useful 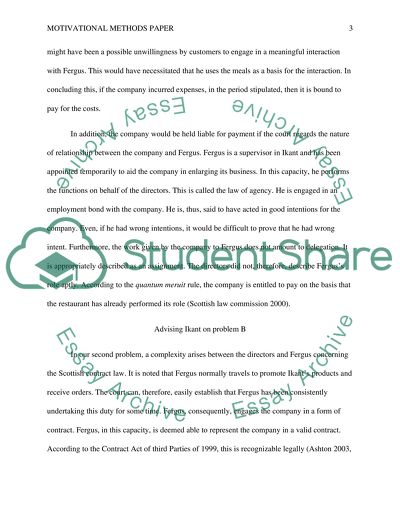 Download file to see previous pages When the company delegated a duty to Fergus, which was an expansion program, it did not examine that Fergus would have undergone various challenges. In addition, the company did not consider the potential benefits that would have come out of each customer. According to the tenements act 2004, the company should always have the capacity to cater for relevant costs (Scotland 2004, p.9). These are costs that result out of reasonable transactions or dealings between the company and a second party. This is irrespective of whether the costs were catered for in the initial budget. The first argument is that, as a sales person, Fergus might have been marketing Ikant. This exists in the view that the company bears social responsibility over his customers and the general society. Marketing and advertisement are factors that have been proven to impact immensely over a company’s revenues and expansion. This, thus, makes the extra costs that Fergus incurred probable in the company’s rational planning. Another reason for the extra costs might have been a possible unwillingness by customers to engage in a meaningful interaction with Fergus. This would have necessitated that he uses the meals as a basis for the interaction. In concluding this, if the company incurred expenses, in the period stipulated, then it is bound to pay for the costs. In addition, the company would be held liable for payment if the court regards the nature of relationship between the company and Fergus. Fergus is a supervisor in Ikant and has been appointed temporarily to aid the company in enlarging its business. In this capacity, he performs the functions on behalf of the directors. This is called the law of agency. He is engaged in an employment bond with the company. He is, thus, said to have acted in good intentions for the company. Even, if he had wrong intentions, it would be difficult to prove that he had wrong intent. Furthermore, the work given by the company to Fergus does not amount to delegation. It is appropriately described as an assignment. The directors did not, therefore, describe Fergus’s role aptly. According to the quantum meruit rule, the company is entitled to pay on the basis that the restaurant has already performed its role (Scottish law commission 2000). Advising Ikant on problem B In our second problem, a complexity arises between the directors and Fergus concerning the Scottish contract law. It is noted that Fergus normally travels to promote Ikant’s products and receive orders. The court can, therefore, easily establish that Fergus has been consistently undertaking this duty for some time. Fergus, consequently, engages the company in a form of contract. Fergus, in this capacity, is deemed able to represent the company in a valid contract. According to the Contract Act of third Parties of 1999, this is recognizable legally (Ashton 2003, p.29). The company law recognizes that companies should still have physical representation despite the arbitrary nature of the board of directors. If the court establishes that Fergus acted in good faith, then the company is bound to the contract. However, according the delegation rule, the directors shall still be responsible for a breach of contract since Fergus is conducting a role that they ought to perform. In addition, company will gain rescission, if only it was stated in the contract. The contract, in this case, must comply with ...Download file to see next pagesRead More
Share:
Cite this document
(“Scots Law Essay Example | Topics and Well Written Essays - 1500 words”, n.d.)
Scots Law Essay Example | Topics and Well Written Essays - 1500 words. Retrieved from https://studentshare.org/law/1435237-scots-law
(Scots Law Essay Example | Topics and Well Written Essays - 1500 Words)
Scots Law Essay Example | Topics and Well Written Essays - 1500 Words. https://studentshare.org/law/1435237-scots-law.
“Scots Law Essay Example | Topics and Well Written Essays - 1500 Words”, n.d. https://studentshare.org/law/1435237-scots-law.
Comments (0)
Click to create a comment or rate a document

CHECK THESE SAMPLES OF Scots Law

New and complex issues have arisen which demanded fresh understanding and handling of cases involved them. This has resulted in the enhanced development of specialized laws e.g. cyber laws and interpretation of those laws. The same is true with Media Laws. Media has developed much in the last half-century. As it evolved as a profession and more people started to join it, there arose the levels of money involved in it. With this grew the contractual obligations on the parts of parties and concerned laws e.g. patent laws, privacy laws, and copyrights laws, etc. also started to play their parts. With these issues, the role of law in the media industry also reached a new height.
Mathew Fisher, the appellant, joined a band with Mr...
6 Pages(1500 words)Assignment
sponsored ads
Save Your Time for More Important Things
Let us write or edit the essay on your topic "Scots Law" with a personal 20% discount.
GRAB THE BEST PAPER

Let us find you another Essay on topic Scots Law for FREE!