Comments (0)
Add to wishlistDelete from wishlist
Cite this document
Summary
The effectiveness of the Australian criminal justice system has been a debatable issue to or not to fulfill the reasonable aspirations of the people from it. It is said against the criminal justice system that public at large is not satisfied how justice is performed by not conducting suitable processing of offenders. …
Download full paperFile format: .doc, available for editing
HIDE THIS PAPERGRAB THE BEST PAPER95.2% of users find it useful 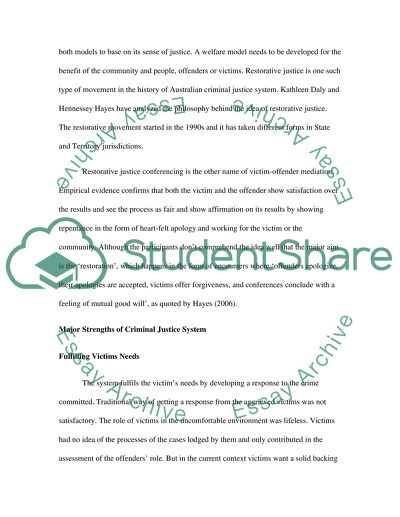 Download file to see previous pages It is said against the criminal justice system that public at large is not satisfied how justice is performed by not conducting suitable processing of offenders. There, it is important to find out the inherent weaknesses of the system. The most noticeable has been the rate of reoffending in the community. Criminality is inherent somewhere in human nature just like good virtues reside in some corners of human heart. Criminologists study and analyse criminal behaviour to rein-in such activities. As remarked by Graycar and Grabosky quoting Santayana (1905)) that ‘Those who cannot remember the past are condemned to repeat it’ to be answered by saying that those want to avoid future will be in a shocking state, stressing on the need to look both ways – past and future. With the changing of times new criminal opportunities have surfaced from the use of new technologies, new type of organizations and new markets. The Australian criminal justice system has also changed although Australian policing is rooted in the British 19th century model. The Australian criminal justice system is based on two models. The one is ‘Due process model’ based on the philosophy of fairness and justice for all stakeholders and the other is Crime control model for punishing the criminals. The current system takes both models to base on its sense of justice. A welfare model needs to be developed for the benefit of the community and people, offenders or victims. Restorative justice is one such type of movement in the history of Australian criminal justice system. Kathleen Daly and Hennessey Hayes have analyzed the philosophy behind the idea of restorative justice. The restorative movement started in the 1990s and it has taken different forms in State and Territory jurisdictions. Restorative justice conferencing is the other name of victim-offender mediation. Empirical evidence confirms that both the victim and the offender show satisfaction over the results and see the process as fair and show affirmation on its results by showing repentance in the form of heart-felt apology and working for the victim or the community. Although the participants don’t comprehend the idea well that the major aim is the ‘restoration’, which happens in the form of encounters where ‘offenders apologize, their apologies are accepted, victims offer forgiveness, and conferences conclude with a feeling of mutual good will’, as quoted by Hayes (2006). Major Strengths of Criminal Justice System Fulfilling Victims Needs The system fulfils the victim’s needs by developing a response to the crime committed. Traditional way of getting a response from the aggrieved victims was not satisfactory. The role of victims in the uncomfortable environment was lifeless. Victims had no idea of the processes of the cases lodged by them and only contributed in the assessment of the offenders’ role. But in the current context victims want a solid backing in role-play (Strang, 2002)). The purpose of restorative justice is to bring the victim back to the limelight of the criminal justice process. Conferencing offers an opportunity to the victim to tell the offender in a congenial environment how the offence has affected the victim and how the offender can compensate the loss caused (Hayes, 2005 p. 78). Fixing Offenders Responsibility Another significant strength of criminal justice system is to inculcate a sense of responsibility in offenders for the crime committed by them. Offenders are asked to explain their crimes, the reasons for committing the crimes and listen to the victims, how they feel at loss at becoming the target of crime. What generally happens at youth courts is ...Download file to see next pagesRead More
Share:
Tags
Cite this document
(“Strengths and/or weaknesses of the Australian Criminal Justice System Essay”, n.d.)
Retrieved de https://studentshare.org/law/1427816-when-all-is-said-and-done-the-current-criminal
(Strengths and/Or Weaknesses of the Australian Criminal Justice System Essay)
https://studentshare.org/law/1427816-when-all-is-said-and-done-the-current-criminal.
“Strengths and/Or Weaknesses of the Australian Criminal Justice System Essay”, n.d. https://studentshare.org/law/1427816-when-all-is-said-and-done-the-current-criminal.
Comments (0)
Click to create a comment or rate a document

In order to compare the welfare system of the three proposed countries, it is important to first develop a comparative method that would guide in comparing the three states. For the purpose of this paper, a binary comparison would be conducted. The implicit comparison would deal with Britain while the explicit comparison would explore the USA and Canada. Thereby a small N’ study would be used, that is, of three countries.
The three countries selected to share a similarity in the form that these countries are a welfare state. This is when welfare is mainly funded by the state. While the USA and Canada focus on the liberal welfare state, the welfare state of the UK is not quite defined.
The comparison of the welfare...
8 Pages(2000 words)Term Paper
sponsored ads
Save Your Time for More Important Things
Let us write or edit the essay on your topic "Strengths and/or weaknesses of the Australian Criminal Justice System" with a personal 20% discount.
GRAB THE BEST PAPER

Let us find you another Essay on topic Strengths and/or weaknesses of the Australian Criminal Justice System for FREE!