Comments (0)
Add to wishlistDelete from wishlist
Cite this document
Summary
Chinese Contract Law The Chinese contract law came to effect in January 2008. It has been one of the most controversial laws. The law was produced from lengthy deliberations between the foreign, domestic and state players…
Download full paperFile format: .doc, available for editing
HIDE THIS PAPERGRAB THE BEST PAPER94% of users find it useful 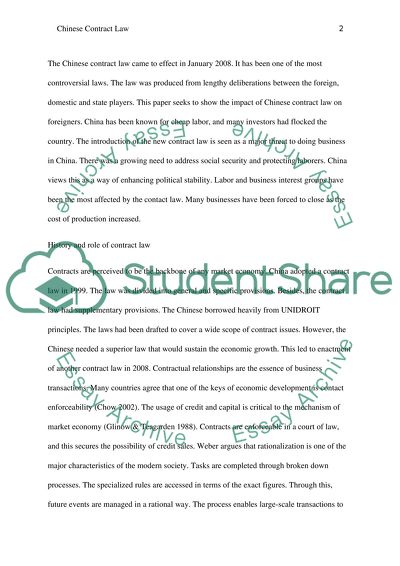 Download file to see previous pages China views this as a way of enhancing political stability. Labor and business interest groups have been the most affected by the contact law. Many businesses have been forced to close as the cost of production increased. History and role of contract law Contracts are perceived to be the backbone of any market economy. China adopted a contract law in 1999. The law was divided into general and specific provisions. Besides, the contract law had supplementary provisions. The Chinese borrowed heavily from UNIDROIT principles. The laws had been drafted to cover a wide scope of contract issues. However, the Chinese needed a superior law that would sustain the economic growth. This led to enactment of another contract law in 2008. Contractual relationships are the essence of business transactions. Many countries agree that one of the keys of economic development is contact enforceability (Chow 2002). The usage of credit and capital is critical to the mechanism of market economy (Glinow & Teagarden 1988). Contracts are enforceable in a court of law, and this secures the possibility of credit sales. Weber argues that rationalization is one of the major characteristics of the modern society. Tasks are completed through broken down processes. The specialized rules are accessed in terms of the exact figures. Through this, future events are managed in a rational way. The process enables large-scale transactions to be conducted (Kitch 1980). A telling example is modern accounting. Accounts are broken down in balance sheets. This is followed by profit and loss accounts. The financial status of a business can be explained in terms of assets and liabilities (Zhang 2006). This explains when contract law is viewed as influential when it comes to economic and infrastructural development. China is no longer a place where cheap knock off products are developed (Jespersen & Skjoett-Larsen 2003). Although the practice of producing counterfeits continues, the quality of modern counterfeits is improved tremendously. The Chinese contact law puts immense emphasis on the clarity of contracts. Article 12 stipulates and describes what the contents of a written contract should be. Advantages of contract law China is nearly meeting the international standards when it comes to contractual legislation. The contract law has eliminated ambiguities when it comes to guidelines on entering into contractual agreements in China. Therefore, the outcome of foreign business contracts is predictable. Benefits The major provision of that gives credible interpretation to Chinese contact law is article 125. The contractual obligations can be supplemented through the provisions of the law (Yongping & Weidi 2008). This occurs when something vital fails to be captured in a contract. Some of those sources include the provision of laws, principle of good faith and transaction usage (Yongping & Weidi 2008). Articles 5 and 6 are firm on the concepts of good faith and fairness. These are some of the benefits of the Chinese contract laws to the foreigners (Jespersen & Skjoett-Larsen 2003). There is an intentional move by the Chinese contract law to create a conducive environment for the foreigners. However, some of the provisions of the new law have an impact on the profitability of the foreign businesses. The article 92 of the Chinese contract law governs post contractual duties between the involved parties. The article suggests an employee is expected to act in a reasonable way ...Download file to see next pagesRead More
Share:
Tags
Cite this document
(“Chinese Contract Law Essay Example | Topics and Well Written Essays - 2500 words”, n.d.)
Chinese Contract Law Essay Example | Topics and Well Written Essays - 2500 words. Retrieved from https://studentshare.org/law/1403411-does-the-chinese-contract-law-create-a-friendly
(Chinese Contract Law Essay Example | Topics and Well Written Essays - 2500 Words)
Chinese Contract Law Essay Example | Topics and Well Written Essays - 2500 Words. https://studentshare.org/law/1403411-does-the-chinese-contract-law-create-a-friendly.
“Chinese Contract Law Essay Example | Topics and Well Written Essays - 2500 Words”, n.d. https://studentshare.org/law/1403411-does-the-chinese-contract-law-create-a-friendly.
Comments (0)
Click to create a comment or rate a document

In th...
8 Pages(2000 words)Case Study
sponsored ads
Save Your Time for More Important Things
Let us write or edit the essay on your topic "Chinese Contract Law" with a personal 20% discount.
GRAB THE BEST PAPER

Let us find you another Essay on topic Chinese Contract Law for FREE!