Comments (0)
Add to wishlist Delete from wishlist
Cite this document
Summary
Name Instructor Course Date Competition Law Question 1 (15 marks) Explain with relevant cases and other authorities the nature of an exclusive distribution system. You would explain why such agreements are potentially contrary to article 101 TFEU and why the distributor might insist on having such protection…
Download full paper File format: .doc, available for editing
HIDE THIS PAPERGRAB THE BEST PAPER96.4% of users find it useful 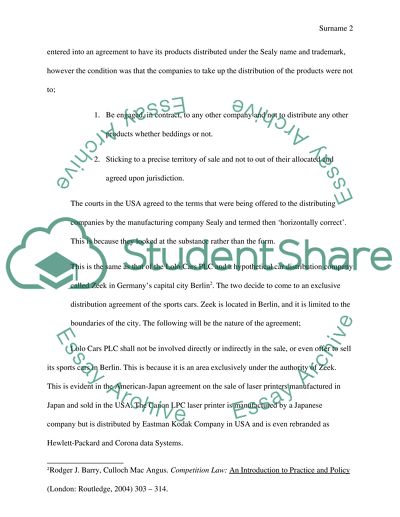 Download file to see previous pages An exclusive distribution system is whereby a company, (manufacturer) grants exclusive rights of its products and/or services, to another company1. The most common form is when a single distributor acquires exclusive rights to market a product in a specific territory. Exclusive distribution limits sales to one dealer or to one distributor in a given market. Take the example of Sealy, a company that manufactures high quality mattresses and beddings products. In 1967 entered into an agreement to have its products distributed under the Sealy name and trademark, however the condition was that the companies to take up the distribution of the products were not to; 1. Be engaged, in contract, to any other company and not to distribute any other products whether beddings or not. 2. Sticking to a precise territory of sale and not to out of their allocated and agreed upon jurisdiction. The courts in the USA agreed to the terms that were being offered to the distributing companies by the manufacturing company Sealy and termed then ‘horizontally correct’. This is because they looked at the substance rather than the form. This is the same as that of the Lolo Cars PLC and a hypothetical car distribution company called Zeek in Germany’s capital city Berlin2. The two decide to come to an exclusive distribution agreement of the sports cars. Zeek is located in Berlin, and it is limited to the boundaries of the city. The following will be the nature of the agreement; Lolo Cars PLC shall not be involved directly or indirectly in the sale, or even offer to sell its sports cars in Berlin. This is because it is an area exclusively under the authority of Zeek. This is evident in the American-Japan agreement on the sale of laser printers manufactured in Japan and sold in the USA. The Canon LPC laser printer is manufactured by a Japanese company but is distributed by Eastman Kodak Company in USA and is even rebranded as Hewlett-Packard and Corona data Systems. Zeek is not allowed to sell the sports cars from Lolo Cars to any other part outside Berlin, and this is because it is aregion that has been demarcated for it. Advertisement of the sports cars outside Berlin is also not allowed. Zeek is also not to supply other products within Berlin that are assumed to be competing with the products of Lolo Cars. That means that Zeek cannot sign another agreement contract with another sports cars manufacturing company, especially if it should supply those cars within Berlin.Zeek should place a written order of the number of the cars that they would like (Roger & Culloch 314). This not only brings about transparency in the activities between the two firms but also gets rid of any form of fraud, and hence brings about responsibility. Lolo CarsCompany can change the price list of its sports cars only once in a year, and should give a written notice of sixty days to Zeek. This is because Zeek needs time to be able to inform their already established clientele about the changes in the prices. Zeek shall use commercially reasonable efforts to promote the sale. Lolo Cars Company should first pass these efforts. If Lolo Cars does not agree with the methods of marketing and advertisement, then Zeek will not use it. These efforts also mean that they will train their own personnel that will be used tomarket and ...Download file to see next pages Read More
Share:
Tags
Cite this document
(“Competition law Essay Example | Topics and Well Written Essays - 2500 words”, n.d.)
Competition law Essay Example | Topics and Well Written Essays - 2500 words. Retrieved from https://studentshare.org/law/1403406-competition-law-long-question-see-attachment

CHECK THESE SAMPLES OF Competition law

In th...
8 Pages (2000 words) Case Study
sponsored ads
Save Your Time for More Important Things
Let us write or edit the essay on your topic "Competition law" with a personal 20% discount.
GRAB THE BEST PAPER

Let us find you another Essay on topic Competition law for FREE!