Comments (0)
Add to wishlist Delete from wishlist
Cite this document
Summary
The focus in this paper is on European Union Competition Law. The aim of the EU Competition law is to come up with a single market so as to allow firms from Europe to access new markets including those that had been blocked following government barriers…
Download full paper File format: .doc, available for editing
HIDE THIS PAPERGRAB THE BEST PAPER92.9% of users find it useful 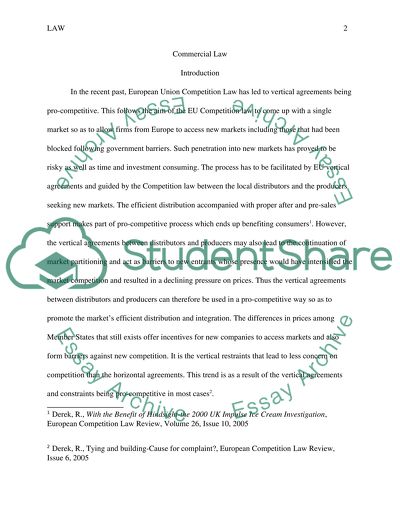 Download file to see previous pages It is evidently clear from the discussion that the process has to be facilitated by EU vertical agreements and guided by the Competition law between the local distributors and the producers seeking new markets. The efficient distribution accompanied with proper after and pre-sales support makes part of pro-competitive process which ends up benefiting consumers. However, the vertical agreements between distributors and producers may also lead to the continuation of market partitioning and act as barriers to new entrants whose presence would have intensified the market competition and resulted in a declining pressure on prices. Thus the vertical agreements between distributors and producers can therefore be used in a pro-competitive way so as to promote the market’s efficient distribution and integration. The differences in prices among Member States that still exists offer incentives for new companies to access markets and also form barriers against new competition. This trend is as a result of the vertical agreements and constraints being pro-competitive in most cases. Enforcement priorities, modernization and more focus being put on effects has led the Competition Law actions to shy away from such agreements and lean towards restrictive practices which it considers being more serious. Since the enactment of Regulation No. 1/2003 as well as the prior notification requirement abolition, the EU Competitive Law decisions regarding vertical agreements have been almost non-existing concerning the Court of Justice litigation on this issue. 3. Following this premises, and without including the developments of major case laws in the adaptation of the new vertical agreement framework, the Law had correctly assumed that the Regulation No. 2790/1999 had come up with a system that was working smoothly. Consequently, the Regulation No. 330/2010 gave a full exemption to particular vertical agreement categories included with new guidelines4. Vertical agreements that are normally concluded between limited market power companies and lack competition hardcore restrictions are normally alleged to be pro-competitive and hence are covered by generalized exemption. Cross agreements which do not qualify according to exemptions do not face automatic prohibition but included as considering the vertical agreements beneficial effects, the undertakings and turnover should not undergo different treatment. Resale Price Maintenance (RPM) The EU Competition law has had remarkable impacts on vertical agreements including the way it affects the RPM5. Most lawyers and economist have argued that the Competition Law has had pro-competitive effects on RPM in relation to vertical agreements. The Supreme Court had a take in this during the Leegin case where it ruled to its favor but with a weak majority. The Competition Law has had both anticompetitive and pro-competitive affects on RPM but the situations leading to pro-competitive effects have proved to be of great significance to vertical agreements. In a situation where there the RPM is strict, free-riding problems can be easily overcome in situations where pre-sale services are offered to consumers by retailers and go ahead to impact such services on the price6. In a similar situation, another retailer may resolve on doing away with the pre-sale services, hence ends up bearing the additional costs but supplies goods at a price that is reduced by taking advantage of the other retailers move to provide pore-sale services. In other ...Download file to see next pages Read More
Share:
Tags
Cite this document
(“European Union Competition Law Essay Example | Topics and Well Written Essays - 1750 words”, n.d.)
Retrieved from https://studentshare.org/law/1396014-european-union-competition-law

In th...
8 Pages (2000 words) Case Study
sponsored ads
Save Your Time for More Important Things
Let us write or edit the essay on your topic "European Union Competition Law" with a personal 20% discount.
GRAB THE BEST PAPER

Let us find you another Essay on topic European Union Competition Law for FREE!