Comments (0)
Add to wishlist Delete from wishlist
Cite this document
Summary
COMPETITION LAW: CRITICAL ASSESSMENT ON INTELLECTUAL PROPERTY RIGHTS AND/OR INFORMATION TECHNOLOGY Introduction New and innovative products are the lifeblood of business entities or organizations. It has become a sound corporate policy or business strategy to come up with contemporary or modern products—consumer or technology—to increase their bottom-line and ultimately, to eliminate their competition if not corner a substantial segment of the market…
Download full paper File format: .doc, available for editing
HIDE THIS PAPERGRAB THE BEST PAPER94.4% of users find it useful 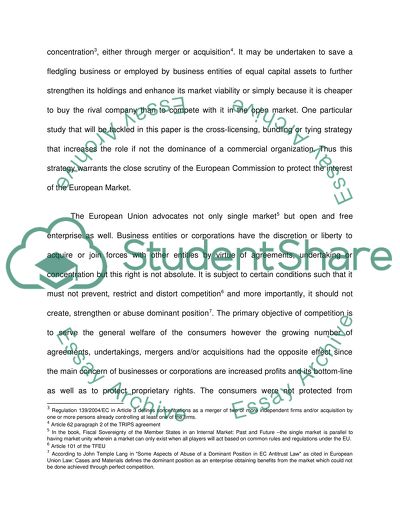 Download file to see previous pages It may be a gadget, technology or pill that would be a panacea to aches and pains. Another strategy is to take over existing business entities or corporate organizations that already possess the technology or business process by way of undertaking1, agreement2 or concentration3, either through merger or acquisition4. It may be undertaken to save a fledgling business or employed by business entities of equal capital assets to further strengthen its holdings and enhance its market viability or simply because it is cheaper to buy the rival company than to compete with it in the open market. One particular study that will be tackled in this paper is the cross-licensing, bundling or tying strategy that increases the role if not the dominance of a commercial organization. Thus this strategy warrants the close scrutiny of the European Commission to protect the interest of the European Market. The European Union advocates not only single market5 but open and free enterprise as well. Business entities or corporations have the discretion or liberty to acquire or join forces with other entities by virtue of agreements, undertaking or concentration but this right is not absolute. It is subject to certain conditions such that it must not prevent, restrict and distort competition6 and more importantly, it should not create, strengthen or abuse dominant position7. The primary objective of competition is to serve the general welfare of the consumers however the growing number of agreements, undertakings, mergers and/or acquisitions had the opposite effect since the main concern of businesses or corporations are increased profits and its bottom-line as well as to protect proprietary rights. The consumers were not protected from corporate greed and adventurism since there were no clear cut policies, standards or measures to regulate or control agreements, undertakings, mergers or acquisitions including collusive or abuse of dominant position by invoking exclusive rights over patents or intellectual properties. However, the enactment of Treaty of the Functioning European Union8 and its predecessor, the Treaty Establishing the European Union9 conferred upon competition authorities the jurisdiction not only to scrutinize undertakings within the EU but to ensure competition in the European market is not distorted. It is likewise authorized to determine the economic viability and practicability of the undertakings. It is also within the purview of the competition authorities to conduct due diligence to assess if the intellectual property rights over a product or information technology would significantly impede effective competition and strengthens or abuses dominance. It is empowered to conduct an inquiry to assess whether competition is still functioning effectively and the same is beneficial to the public in general. The TFEU was further supplemented by other regulatory measures such as Merger Control10, Individual11 and Block12 Exemptions and other Regulations which target specific industries or sectors. The task of this paper is to determine based on ...Download file to see next pages Read More
Share:
Tags
Cite this document
(“Competition Law Assignment Example | Topics and Well Written Essays - 3750 words”, n.d.)
Retrieved from https://studentshare.org/law/1398002-competition-law

CHECK THESE SAMPLES OF Competition Law

In th...
8 Pages (2000 words) Case Study
sponsored ads
Save Your Time for More Important Things
Let us write or edit the assignment on your topic "Competition Law" with a personal 20% discount.
GRAB THE BEST PAPER

Let us find you another Assignment on topic Competition Law for FREE!