Comments (0)
Add to wishlistDelete from wishlist
Cite this document
Summary
Defence of Loss of Control The law relating to voluntary manslaughter has been modified to some extent by the enactment of the Coroners and Justice Act 2009. Section 56 of this Act abolished the common law provocation defence, and annulled section 3 of the Homicide Act 1957…
Download full paperFile format: .doc, available for editing
HIDE THIS PAPERGRAB THE BEST PAPER98.6% of users find it useful 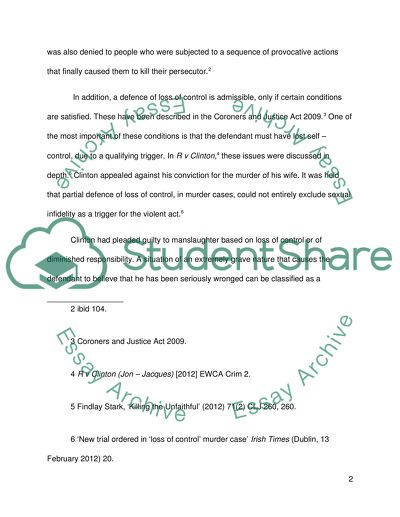 Download file to see previous pages The requirement for a defence of provocation was a sudden and temporary loss of control, which clearly favoured the impulsive and short – tempered individual. In general, the defence of provocation under the common law had been denied to individuals who had not acted spontaneously, consequent to the provocative action or words of the victim. It was also denied to people who were subjected to a sequence of provocative actions that finally caused them to kill their persecutor.2 In addition, a defence of loss of control is admissible, only if certain conditions are satisfied. These have been described in the Coroners and Justice Act 2009.3 One of the most important of these conditions is that the defendant must have lost self – control, due to a qualifying trigger. In R v Clinton,4 these issues were discussed in depth.5 Clinton appealed against his conviction for the murder of his wife. It was held that partial defence of loss of control, in murder cases, could not entirely exclude sexual infidelity as a trigger for the violent act.6 Clinton had pleaded guilty to manslaughter based on loss of control or of diminished responsibility. A situation of an extremely grave nature that causes the defendant to believe that he has been seriously wronged can be classified as a qualifying trigger.7 However, the applicable statute, namely the Coroners and Justice Act 2009 had not included sexual infidelity as a qualifying trigger. As such, the erstwhile defence of provocation has been annulled and supplanted with a partial defence of loss of control. This was achieved, via the provisions of the Coroners and Justice Act 2009.8 An expansion has been achieved by means of this new defence, as it encompasses instances of loss of control occasioned by anger or outrage, and fear. This change was the outcome of the efforts of the Law Commission in the years 2004 and 2006, and which was finalised by the Government consultation paper of 2008.9 With regard to provocation, the Coroners and Justice Act 2009, while considering the previous law, engenders a strikingly different approach and attribution of prominence that is the outcome of the deliberations of the Law Commission. However, the suggestions of the Law Commission have not been adopted in their entirety. The principal change recommended by the Law Commission was that the new partial defences relating to anger and fear were to be construed in a manner that required the abandonment of the loss of control. 10 Nevertheless, this recommendation of the Law Commission was not accepted. As such, the Law Commission had made a recommendation that required killing through fear and anger to be viewed from an entirely different perspective.11 This perspective was essentially founded on the notion of rejection of loss of control. Moreover, the Coroners and Justice Act 2009 describes the conditions wherein a qualifying trigger could be present.12 Objective evaluation is essential, in accordance with the requirements of subsection 55(4) of this Act. At the same time, the prohibitions in subsection (6) of this Act served to complicate the process of objective evaluation. This latter subsection identified several features that were to be explicitly excluded from the class of qualifying triggers.13 In addition, the greatest difficulty was encountered with subsection 55(6)(c) of the ...Download file to see next pagesRead More
Share:
Tags
Cite this document
(“Criminal Law Essay Example | Topics and Well Written Essays - 2500 words”, n.d.)
Retrieved from https://studentshare.org/law/1402083-criminal-law
(Criminal Law Essay Example | Topics and Well Written Essays - 2500 Words)
https://studentshare.org/law/1402083-criminal-law.
“Criminal Law Essay Example | Topics and Well Written Essays - 2500 Words”, n.d. https://studentshare.org/law/1402083-criminal-law.
Comments (0)
Click to create a comment or rate a document

CHECK THESE SAMPLES OF Criminal Law

They are on trial and will be dealt with fairly. These laws ensure that no one, even if he or she has committed a crime is abused or punished cruelly.
Following the history of civilization like in china, we see the traces of systems for Criminal justice in order to provide safety for the citizens. Evolving through the years laws have been modified and changed to form the system that we know today.
From its start, the “U.S. criminal justice system” has advocated the idea of “checks and balances”. To avoid dictatorial rule, the people who founded this system in such a way that one person was not given control or authority completely to punish the criminals. The idea of assigning a ‘jury...
6 Pages(1500 words)Assignment
sponsored ads
Save Your Time for More Important Things
Let us write or edit the essay on your topic "Criminal Law" with a personal 20% discount.
GRAB THE BEST PAPER

Let us find you another Essay on topic Criminal Law for FREE!