Comments (1)
Add to wishlist Delete from wishlist
Cite this document
Summary
This essay talks that the Health and Safety at Work Act 1974 is an act of Parliament that defines the structure of reinforcing and regulating health and safety in the workplace. The Act covers a large variety of duties that are imposed on employees, employers, suppliers, contractors…
Download full paper File format: .doc, available for editing
HIDE THIS PAPERGRAB THE BEST PAPER98.1% of users find it useful 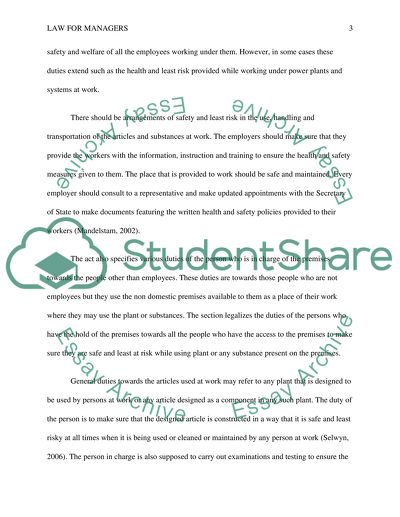 Extract of sample "Law for Managers"

Download file to see previous pages This paper stresses that the provisions of this Act were structured to serve for the security of the people’s health, safety and welfare at work, to protect the persons at work from any risks to their health in regard or connection to the activities that the person has at work, to control the use and presence of highly inflammable dangerous substances, and otherwise preventing the illegal use of such substances, and lastly to control the emission of hazardous gases into the atmosphere from the premises.
This essay declares that as the law sets out its structure and enforces the provisions of this act, the general duties that are imposed under the act to the specific people regarded under this law have been given. The general duties of the employers towards their employees are that they should ensure health, safety and welfare of all the employees working under them. However, in some cases these duties extend such as the health and least risk provided while working under power plants and systems at work. The act also specifies various duties of the person who is in charge of the premises towards the people other than employees. These duties are towards those people who are not employees but they use the non domestic premises available to them as a place of their work where they may use the plant or substances. The section legalizes the duties of the persons who have the hold of the premises towards all the people who have the access to the premises to make sure they are safe and least at risk while using plant or any substance present on the premises. General duties towards the articles used at work may refer to any plant that is designed to be used by persons at work or any article designed as a component in any such plant. The duty of the person is to make sure that the designed article is constructed in a way that it is safe and least risky at all times when it is being used or cleaned or maintained by any person at work (Selwyn, 2006). The person in charge is also supposed to carry out examinations and testing to ensure the safety at regular intervals. He is also enforced to take responsibility of securing and providing the people with adequate information about the substance and all about it. According to the act, a person may rely on the testing which is carried out by others as long as it is reasonable to do so. A person may also rely on a written document by any other person to be sure about a safety item. Under the section 6 of the act, designers and manufactures must carry out proper research to identify ...Download file to see next pages Read More
Share:
Cite this document
(“Law for Managers Essay Example | Topics and Well Written Essays - 2500 words - 2”, n.d.)
Law for Managers Essay Example | Topics and Well Written Essays - 2500 words - 2. Retrieved from https://studentshare.org/law/1401930-law-for-managers

mi
mittielittle added comment 10 months ago
Student rated this paper as
I never thought 2500 words essay could be written in such a free manner. I loved the style of this essay. Will definitely use it for my own work!

CHECK THESE SAMPLES OF Law for Managers

In th...
8 Pages (2000 words) Case Study
sponsored ads
Save Your Time for More Important Things
Let us write or edit the essay on your topic "Law for Managers" with a personal 20% discount.
GRAB THE BEST PAPER

Let us find you another Essay on topic Law for Managers for FREE!