Comments (0)
Add to wishlistDelete from wishlist
Cite this document
Summary
The subsistence of industries greatly depends upon the quality of working conditions of the employees and their satisfaction in order to provide quality work. The DOL exists to protect and promote labor…
Download full paperFile format: .doc, available for editing
HIDE THIS PAPERGRAB THE BEST PAPER96.6% of users find it useful 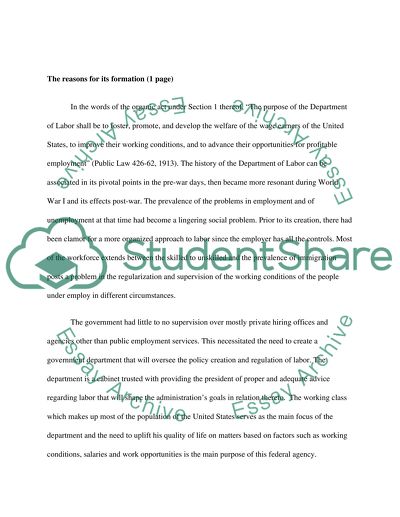 Extract of sample "US Department of lebor"

Download file to see previous pages “Public Law 426-62: An Act to create a Department of Labor” was the organic act which created a sole DOL with a Secretary of Labor removed from the Department of Commerce. The law was signed reluctantly by President Taft within hours from the time Woodrow Wilson took over as president.
The Progressive Movement has been credited for the call for its enforcement. Earlier, the DOL consisted mainly of the United States Conciliation Service (USCS), which was responsible for overseeing and mediating labor disputes in the country. Together with this branch are four other which already existed prior to the DOL. The first Labor Secretary was Congressman William Wilson appointed by President Wilson. The appointee had been a known labor campaigner as founder of United Mine Workers of America where he also once served as its Secretary-Treasurer.
The mission statement of the Department of Labor is “To foster, promote, and develop the welfare of the wage earners, job seekers, and retirees of the United States; improve working conditions; advance opportunities for profitable employment; and assure work-related benefits and rights.”
This is not much of a stretch from the purpose contained in its organic act as it has remained forcefully relevant. Currently, the department is tasked with the difficult task on the matter which has become the main topic in the presidential debate: unemployment. The current and future goals can be found in the Secretary’ ...Download file to see next pagesRead More
Share:
Tags
Cite this document
(“US Department of lebor Research Paper Example | Topics and Well Written Essays - 2500 words”, n.d.)
US Department of lebor Research Paper Example | Topics and Well Written Essays - 2500 words. Retrieved from https://studentshare.org/law/1401714-us-department-of-lebor

CHECK THESE SAMPLES OF US Department of lebor

A healthy person is not difficult to define. He or she is a person who does his chores regularly...
10 Pages(2500 words)Term Paper

These contribute to several challenges faced by the IC today1.
For example, the Japanese fleet’s attack on Pearl Harbor, which was a surprise attack and the subsequent entrance of America into the Second World War, illustrated the need to re-engineer the outdated policies and organization of the IC. The changes made by the U.S. in the IC, which occasioned from World War II are still palpable today2. Some changes were later made when the Senate Committees came together with the aim of investigating the Central Intelligence Agency (CIA), National Security Agency (NSA), Federal Bureau of Investigation (FBI), and Internal Revenue Service (IRS) to evaluate the possible abuses of power that transpired in the preceding years.<...
9 Pages(2250 words)Assignment
sponsored ads
Save Your Time for More Important Things
Let us write or edit the research paper on your topic "US Department of lebor" with a personal 20% discount.
GRAB THE BEST PAPER

Let us find you another Research Paper on topic US Department of lebor for FREE!