Comments (0)
Add to wishlistDelete from wishlist
Cite this document
Summary
Legal, Safety, and Regulatory Requirements Names Institute of affiliation Legal, Safety, and Regulatory Requirements It is pertinent to note that the current governmental strategies are planned under several departments so that the departmental issues can be solved in a professional manner…
Download full paperFile format: .doc, available for editing
HIDE THIS PAPERGRAB THE BEST PAPER92% of users find it useful 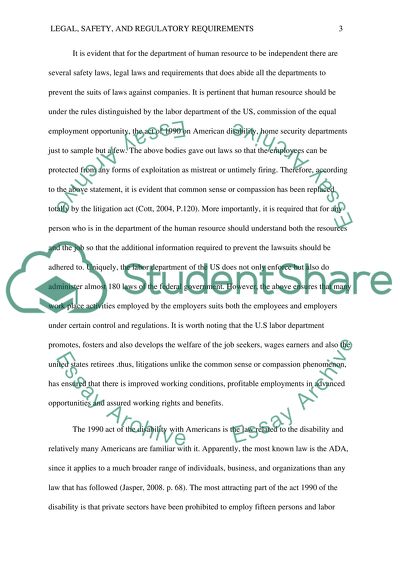 Download file to see previous pages This essay, will analyze how several departments for instance the employee related regulations, labor department ,commission of the employment equality and the home security department just to mention but a few are able to practice litigation instead of common sense and compassion. First, it is worth to note the terms common sense, litigation, and compassion are crucial in the daily operations of departments. Common sense entails the attention you award to the obvious, and it is common to every individual, but again people tend to become lost to their own fantasies. Compassion on other hand means the convergence of the strong feelings. Lastly, litigation stands for the legal process that stimulates the argument of parties against each other on their cases. Here in most cases arguments end up in courtrooms or usage of discovery whereby the parties involved bears the name litigants. During this period, the parties are required to bring out their evidence to support their facts. The above process continues until all the parties have reached to a conclusion and after resolution, or trials are made. It follows that the above process is common in almost every departments in the US and that for any department to reach a consensus a court should participate. It is evident that for the department of human resource to be independent there are several safety laws, legal laws and requirements that does abide all the departments to prevent the suits of laws against companies. It is pertinent that human resource should be under the rules distinguished by the labor department of the US, commission of the equal employment opportunity, the act of 1990 on American disability, home security departments just to sample but a few. The above bodies gave out laws so that the employees can be protected from any forms of exploitation as mistreat or untimely firing. Therefore, according to the above statement, it is evident that common sense or compassion has been replaced totally by the litigation act (Cott, 2004, P.120). More importantly, it is required that for any person who is in the department of the human resource should understand both the resources and the job so that the additional information required to prevent the lawsuits should be adhered to. Uniquely, the labor department of the US does not only enforce but also do administer almost 180 laws of the federal government. However, the above ensures that many work place activities employed by the employers suits both the employees and employers under certain control and regulations. It is worth noting that the U.S labor department promotes, fosters and also develops the welfare of the job seekers, wages earners and also the united states retirees .thus, litigations unlike the common sense or compassion phenomenon, has ensured that there is improved working conditions, profitable employments in advanced opportunities and assured working rights and benefits. The 1990 act of the disability with Americans is the law related to the disability and relatively many Americans are familiar with it. Apparently, the most known law is the ADA, since it applies to a much broader range of individuals, business, and organizations than any law that has followed (Jasper, 2008. p. 68). The most attracting part of the act 1990 of the disability is that private sectors have been prohibited to employ fifteen persons and labor organizations, employment agencies and join labor committees, which tend to discriminate the ...Download file to see next pagesRead More
Share:
Tags
Cite this document
(“Legal, Safety, and Regulatory Requirements Essay”, n.d.)
Legal, Safety, and Regulatory Requirements Essay. Retrieved from https://studentshare.org/health-sciences-medicine/1470147-legal-safety-and-regulatory-requirements
(Legal, Safety, and Regulatory Requirements Essay)
Legal, Safety, and Regulatory Requirements Essay. https://studentshare.org/health-sciences-medicine/1470147-legal-safety-and-regulatory-requirements.
“Legal, Safety, and Regulatory Requirements Essay”, n.d. https://studentshare.org/health-sciences-medicine/1470147-legal-safety-and-regulatory-requirements.
Comments (0)
Click to create a comment or rate a document

CHECK THESE SAMPLES OF Legal, Safety, and Regulatory Requirements

In the 19th century, marijuana became a common preference for ma...
6 Pages(1500 words)Case Study
sponsored ads
Save Your Time for More Important Things
Let us write or edit the essay on your topic "Legal, Safety, and Regulatory Requirements" with a personal 20% discount.
GRAB THE BEST PAPER

Let us find you another Essay on topic Legal, Safety, and Regulatory Requirements for FREE!