Comments (0)
Add to wishlist Delete from wishlist
Cite this document
Summary
There are several reasons why the government should insist on the usage of renewable energy sources. Renewable energy sources are no likely to cause pollution in the air and on water bodies.However,there are some sources of renewable energy that can cause environmental degradation if not carefully used…
Download full paper File format: .doc, available for editing
HIDE THIS PAPERGRAB THE BEST PAPER91.6% of users find it useful 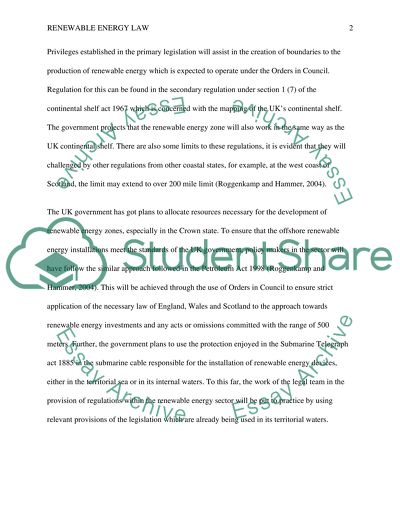 Download file to see previous pages There are several reasons why the government should insist on the usage of renewable energy sources. Renewable energy sources are no likely to cause pollution in the air and on water bodies.However,there are some sources of renewable energy that can cause environmental degradation if not carefully used; such sources include large hydro and some kinds of biomass. Renewable energy is also seen as a perfect example in fighting global warming. These sources of energy do not emit carbon monoxide into the air thus affecting the ozone layer. Further, renewable sources of energy are sustainable; they can be used for several years without being depleted. Renewable sources of energy such as hydro, solar, geothermal, wind, tidal and wave power have got no fuel costs: their production does not depend on the presence of fuel for their production. Their usage can prevent the ever rising prices of energy.The UK and Canada have got the powers to declare an executive economic zone (EEZ).Such a resolution means that they are able to establish any organization that will be mandated and concerned with the production of renewable energy. They will also be able to produce renewable energy through the water, current and winds. The UK has got no intention to declare an EEZ, however, the government will consider the move once it receives royal assent from the United Nations. Precedent to this policy is witnessed in the country’s commissioning of an Executive Fishing Zone and another zone for the conservation of the marine environment. These two policies progress the UK’s ability in respect to specific rights, those that exist outside its territorial waters (Roggenkamp and Hammer, 2004). Privileges established in the primary legislation will assist in the creation of boundaries to the production of renewable energy which is expected to operate under the Orders in Council. Regulation for this can be found in the secondary regulation under section 1 (7) of the continental shelf act 1967 which is concerned with the mapping of the UK’s continental shelf. The government projects that the renewable energy zone will also work in the same way as the UK continental shelf. There are also some limits to these regulations, it is evident that they will challenged by other regulations from other coastal states, for example, at the west coast of Scotland, the limit may extend to over 200 mile limit (Roggenkamp and Hammer, 2004). The UK government has got plans to allocate resources necessary for the development of renewable energy zones, especially in the Crown state. To ensure that the offshore renewable energy installations meet the standards of the UK government, policy makers in the sector will have follow the similar approach followed in the Petroleum Act 1998 (Roggenkamp and Hammer, 2004). This will be achieved through the use of Orders in Council to ensure strict application of the necessary law of England, Wales and Scotland to the approach towards renewable energy investments and any acts or omissions committed with the range of 500 meters. Further, the government plans to use the protection enjoyed in the Submarine Telegraph act 1885 in the submarine cable responsible for the installation of renewable energy devices, either in the territorial sea or in its internal waters. To this far, the work of the legal team in the provision of regulations within the renewable energy sector will be put to practice by using relevant provisions of the legislation which are already being used in its territorial waters. The government also holds the view that offshore renewable energy and their relation with the integrated transmission network should honor the same quality and safety as the onshore installations. Policy makers therefore plan to extend the legality of the sections 29 and 30 of the electricity act to the renewable energy zone. Further, due to the potentiality of disaster that offshore renewable energy may pose to the airplanes, they plan to also use the civil aviation authority so as to ...Download file to see next pages Read More
Share:
Tags
Cite this document
(“Renewable energy law Essay Example | Topics and Well Written Essays - 2000 words”, n.d.)
Retrieved de https://studentshare.org/law/1398050-renewable-energy-law

In th...
8 Pages (2000 words) Case Study
sponsored ads
Save Your Time for More Important Things
Let us write or edit the essay on your topic "Renewable energy law" with a personal 20% discount.
GRAB THE BEST PAPER

Let us find you another Essay on topic Renewable energy law for FREE!