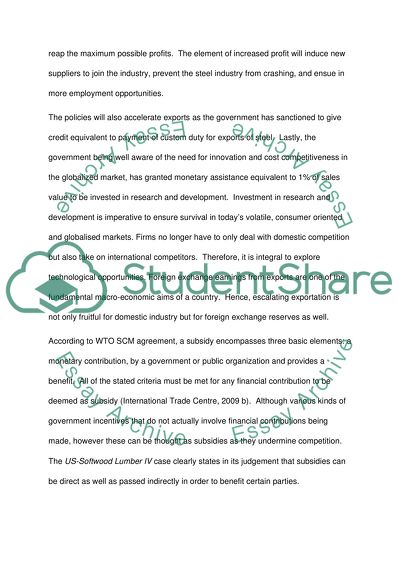 Download file to see previous pages World Trade Organization (WTO) Agreement of Subsidies and Countervailing Measures (ASCM) is a practical example of hard instrument model of international laws directed at regulation of subsides. A subsidy has been defined concretely to include financial support as well as price support extended by a government that creates an advantageous situation for certain industries. Alturai and Benares are neighbouring countries and currently both hold membership in World Trade Organisation. Alturai is facing recession in its steel industry so consequently, the government has formulated new economic policies. For instance, the government has extended and assured constant supply of iron that is the primary raw material for manufacturing steel. The stable and consistent supply of raw material will enable the steel industry to boost production. Additionally, the implementation of price ceiling is a significant incentive as suppliers will be able to reap the maximum possible profits. The element of increased profit will induce new suppliers to join the industry, prevent the steel industry from crashing, and ensue in more employment opportunities. The policies will also accelerate exports as the government has sanctioned to give credit equivalent to payment of custom duty for exports of steel. Lastly, the government being well aware of the need for innovation and cost competitiveness in the globalized market, has granted monetary assistance equivalent to 1% of sales value to be invested in research and development. Investment in research and development is imperative to ensure survival in today’s volatile, consumer oriented and globalised markets. Firms no longer have to only deal with domestic competition but also take on international competitors. Therefore, it is integral to explore technological opportunities. Foreign exchange earnings from exports are one of the fundamental macro-economic aims of a country. Hence, escalating exportation is not only fruitful for domestic industry but for foreign exchange reserves as well. According to WTO SCM agreement, a subsidy encompasses three basic elements: a monetary contribution, by a government or public organization and provides a benefit. All of the stated criteria must be met for any financial contribution to be deemed as subsidy (International Trade Centre, 2009 b). Although various kinds of government incentives that do not actually involve financial contributions being made, however these can be thought as subsidies as they undermine competition. The US-Softwood Lumber IV case clearly states in its judgement that subsidies can be direct as well as passed indirectly in order to benefit certain parties. However, the SCM agreement demands that a financial contribution is a prerequisite for subsidy such as grants, loans, guarantees, fiscal incentives. Secondly, the contribution has to be made by or at the order of the government or a public entity within the country. Obviously, a subsidy must prove beneficial for the interest of the recipient; sometimes the benefit is easily identifiable whereas in other instances, it can be complicated (Macrory, Appleton, & Plummer, 2005). The EC-DRAMs Chips case is a clear reminder that a subsidy passed to only 6 out of 200 firms is enough to be labelled as a subsidy established under specificity. Article 1 of ASCM lays down the definition of a subsidy, clause1.1 states (WTO, 1995): “ ...Download file to see next pagesRead More
Share:
Tags
Cite this document
(“INTERNATIONAL LAW Essay Example | Topics and Well Written Essays - 2500 words”, n.d.)
Retrieved from https://studentshare.org/law/1396976-international-law
(INTERNATIONAL LAW Essay Example | Topics and Well Written Essays - 2500 Words)
https://studentshare.org/law/1396976-international-law.
“INTERNATIONAL LAW Essay Example | Topics and Well Written Essays - 2500 Words”, n.d. https://studentshare.org/law/1396976-international-law.
Comments (0)
Click to create a comment or rate a document

CHECK THESE SAMPLES OF INTERNATIONAL LAW

As a matter of fact, Hoffman’s statement that “international affairs is the nemesis of liberalism” has a grain of truth in it and this is especially so after the 9/11 incident.
There are two schools of thought or perspectives that are used to view international affairs: liberalism and realism. The study of these two perspectives is significant to the idea posed by Stanley Hoffman because they determine the reasons why international affairs, according to him, does not only see eye-to-eye with liberalism but seems to stand on the opposing side of it.
Liberalism can be defined as having four elements: citizens; the legislature; property rights, and; a market-driven economy (Dunne 186). Realism, on the othe...
6 Pages(1500 words)Assignment
sponsored ads
Save Your Time for More Important Things
Let us write or edit the essay on your topic "INTERNATIONAL LAW" with a personal 20% discount.
GRAB THE BEST PAPER

Let us find you another Essay on topic INTERNATIONAL LAW for FREE!