Comments (0)
Add to wishlistDelete from wishlist
Cite this document
Summary
Saudi society is making a determined effort to be receptive to women in the workforce. Employers are also starting to recognize the inherent contribution women bring as employees into a job. It is, therefore, recognized that it is important for everyone especially women to know their rights under Saudi Law. …
Download full paperFile format: .doc, available for editing
HIDE THIS PAPERGRAB THE BEST PAPER93.9% of users find it useful 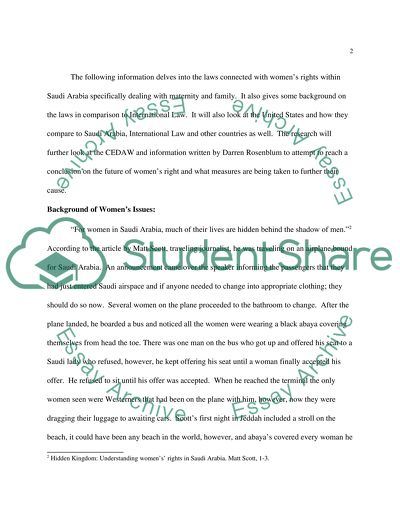 Download file to see previous pages Who is considered an employee under the law? The Saudi Law defines an employee as “a workman, meaning any person working for an employee under the employer’s management or supervision in return for a wage (salary).” The labor laws are very strict and very specific in regard to women as employees. Women are not allowed to be employed in jobs that can cause harm to their health or even expose them to any kind of specific hazard. Therefore, women are discouraged from working night shifts, as they would be more likely to be placed in a position that could cause them harassment by men. This could also place them in a position where they would be more likely to become victims of crime or violence.
The following information delves into the laws connected with women’s rights within Saudi Arabia specifically dealing with maternity and family. It also gives some background on the laws in comparison to International Law. It will also look at the United States and how they compare to Saudi Arabia, International Law and other countries as well. The research will further look at the CEDAW and information written by Darren Rosenblum to attempt to reach a conclusion on the future of women’s right and what measures are being taken to further their cause.
Background of Women’s Issues:
“For women in Saudi Arabia, much of their lives are hidden behind the shadow of men.” According to the article by Matt Scott, traveling journalist, he was traveling on an airplane bound for Saudi Arabia. An announcement came over the speaker informing the passengers that they had just entered Saudi airspace and if anyone needed to change into appropriate clothing; they should do so now. Several women on the plane proceeded to the bathroom to change. After the plane landed, he boarded a bus and noticed all the women were wearing a black abaya covering themselves from head the toe. There was one man on the bus who got up and offered his seat to a Saudi lady who refused, however, he kept offering his seat until a woman finally accepted his offer. He refused to sit until his offer was accepted. When he reached the terminal the only women seen were Westerners that had been on the plane with him, however, now they were dragging their luggage to awaiting cars. Scott’s first night in Jeddah included a stroll on the beach, it could have been any beach in the world, however, and abaya’s covered every woman he saw. His guide quickly told him, “It is just clothing,” said Mohammed….it doesn’t affect what’s underneath.”3 He contends that this was a brief introduction to what he referred to as “the kingdom,” and an issue that he found very hard to understand. He had just entered another country where customs dictate men and women do not mix. He found that it was very difficult to gain the perspective of a woman’s view of her life in this kingdom since men and women don’t mix. He picked up an English newspaper and turned to the Arab News where a Saudi female university student referred to a Starbucks coffee shop as unbelievable. She could not fathom music, socializing and men and women in the same place and gave the impression that it was a sinful place and should be banned. So how do these women feel about their lifestyles? Even if many of the women are in opposition to their lives, they are unable to speak out. It’ ...Download file to see next pagesRead More
Share:
Tags
Cite this document
(“Maternity Law Comparison: Saudia Arabian, International Law and the Research Paper”, n.d.)
Retrieved from https://studentshare.org/law/1396410-maternity-law-comparison-saudia-arabian-international-law-and-the-united-states

As a matter of fact, Hoffman’s statement that “international affairs is the nemesis of liberalism” has a grain of truth in it and this is especially so after the 9/11 incident.
There are two schools of thought or perspectives that are used to view international affairs: liberalism and realism. The study of these two perspectives is significant to the idea posed by Stanley Hoffman because they determine the reasons why international affairs, according to him, does not only see eye-to-eye with liberalism but seems to stand on the opposing side of it.
Liberalism can be defined as having four elements: citizens; the legislature; property rights, and; a market-driven economy (Dunne 186). Realism, on the othe...
6 Pages(1500 words)Assignment
sponsored ads
Save Your Time for More Important Things
Let us write or edit the research paper on your topic "Maternity Law Comparison: Saudia Arabian, International Law and the United States" with a personal 20% discount.
GRAB THE BEST PAPER

Let us find you another Research Paper on topic Maternity Law Comparison: Saudia Arabian, International Law and the United States for FREE!