Comments (0)
Add to wishlistDelete from wishlist
Cite this document
Summary
The researcher discussed threadbare the legal position of an employee and the employer as per UK law. The researcher of this essay aims to pay special attention to the burden of unfair dismissal and issue of dismissing employees for poor performance…
Download full paperFile format: .doc, available for editing
HIDE THIS PAPERGRAB THE BEST PAPER96.8% of users find it useful 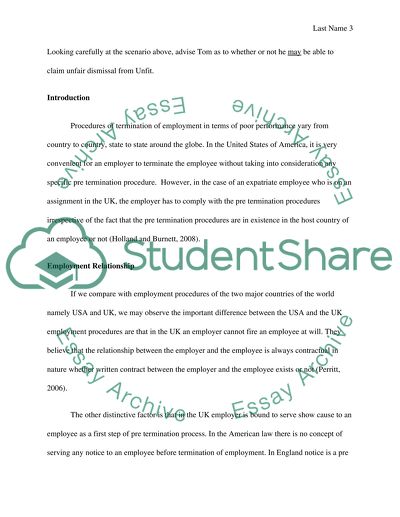 Download file to see previous pages The author has rightly presented that procedures of termination of employment in terms of poor performance vary from country to country, state to state around the globe. In the United States of America, it is very convenient for an employer to terminate the employee without taking into consideration any specific pre termination procedure. However, in the case of an expatriate employee who is on an assignment in the UK, the employer has to comply with the pre termination procedures irrespective of the fact that the pre termination procedures are in existence in the host country of an employee or not. In the UK believe that the relationship between the employer and the employee is always contractual in nature whether written contract between the employer and the employee exists or not. The other distinctive factor is that in the UK employer is bound to serve show cause to an employee as a first step of pre termination process. In the American law there is no concept of serving any notice to an employee before termination of employment. In England notice is a pre requisite of termination process. The employment of contract should contain the notice mutually agreed upon by the stakeholders of a contract employment. If contract of employment lacks notice period then the competent court of law comes forward to determine that period. Usually it should be at least one weak for each and every completed year of employment that culminates up to twelve weeks at a maximum. (Holland and Burnett, 2008). As per UK law, termination or dismissal of employment of an employee without any cogent reason and without serving any notice may attract penal action / damages claim against the employer. The damages claim depends on the length of service of an employee. If the period is longer the claim is bigger and if the tenure is shorter the claim would be shorter. Under the mentioned situation the employee should knock the door of the competent court of law to claim compensation (Taylor and Emir, 2009). Unfair Dismissal In England, if an employee performs satisfactorily the whole year he or she may have the statutory rights. It means that he or she cannot be dismissed or terminated. The burden of unfair dismissal lies on the shoulder of an employer. The deficiencies of an employee which may lead to his or her dismissal are a) incapable b) less qualified c) misconduct and d) breach of statute (Holland and Burn ...Download file to see next pagesRead More
Share:
Cite this document
(“Employment law in UK Essay Example | Topics and Well Written Essays - 1500 words”, n.d.)
Retrieved from https://studentshare.org/law/1395865-employment-law-in-uk
(Employment Law in UK Essay Example | Topics and Well Written Essays - 1500 Words)
https://studentshare.org/law/1395865-employment-law-in-uk.
“Employment Law in UK Essay Example | Topics and Well Written Essays - 1500 Words”, n.d. https://studentshare.org/law/1395865-employment-law-in-uk.
Comments (0)
Click to create a comment or rate a document

CHECK THESE SAMPLES OF Employment law in UK

In th...
8 Pages(2000 words)Case Study
sponsored ads
Save Your Time for More Important Things
Let us write or edit the essay on your topic "Employment law in UK" with a personal 20% discount.
GRAB THE BEST PAPER

Let us find you another Essay on topic Employment law in UK for FREE!