Comments (0)
Add to wishlist Delete from wishlist
Cite this document
Summary
The paper“Voluntarily Assuming Liability under the Law of Contract” considers precedents from which it is clear that people who put themselves at risk (e.g. talking on a mobile while drunk driving) should take responsibility for the consequences of their actions, and not shift it to others. …
Download full paper File format: .doc, available for editing
HIDE THIS PAPERGRAB THE BEST PAPER97.1% of users find it useful 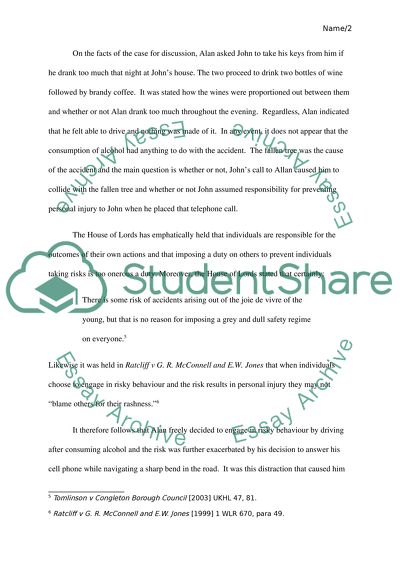 Extract of sample "Voluntarily Assuming Liability under the Law of Contract"

Download file to see previous pages The classic test for the imposition of a duty of care was articulated in Caparo Industries v Dickman. Accordingly, a duty of care will exist only where there is foreseeability, proximity and if the imposition of a duty of care is fair and reasonable in the circumstances.  Norris argues that in applying the test articulated in Caparo, it is necessary to determine whether or not a duty of care was assumed by the defendant and whether or not it was reasonable for the plaintiff to rely on the defendant’s assumption. It is important to note, however, that the assumption of responsibility and reliance on the duty are not conclusive evidence of the existence of a duty of care, but maybe “one of the ways in which the necessary degree of proximity may arise.”
On the facts of the case for discussion, Alan asked John to take his keys from him if he drank too much that night at John’s house. The two proceed to drink two bottles of wine followed by brandy coffee.  It was stated how the wines were proportioned out between them and whether or not Alan drank too much throughout the evening.  Regardless, Alan indicated that he felt able to drive and nothing was made of it.  In any event, it does not appear that the consumption of alcohol had anything to do with the accident.  The fallen tree was the cause of the accident and the main question is whether or not, John’s call to Allan caused him to collide with the fallen tree and whether or not John assumed responsibility for preventing personal injury to John when he placed that telephone call. ...Download file to see next pages Read More
Share:
Tags
Cite this document
(“Law of obligations essay Example | Topics and Well Written Essays - 3000 words”, n.d.)
Retrieved from https://studentshare.org/law/1395571-law-of-obligations-essay

In th...
8 Pages (2000 words) Case Study
sponsored ads
Save Your Time for More Important Things
Let us write or edit the case study on your topic "Voluntarily Assuming Liability under the Law of Contract" with a personal 20% discount.
GRAB THE BEST PAPER

Let us find you another Case Study on topic Voluntarily Assuming Liability under the Law of Contract for FREE!