The Nature of Divorce Law in England and Wales - Dissertation Example

Comments (0)
Add to wishlist Delete from wishlist
Cite this document
Summary
This research aims to evaluate and present the nature of divorce law in England and Wales. In these countries, the major fault of divorce since the traditional days was that it was only given to men prior to the enactment of the matrimonial act…
Download full paper File format: .doc, available for editing
HIDE THIS PAPERGRAB THE BEST PAPER93.5% of users find it useful 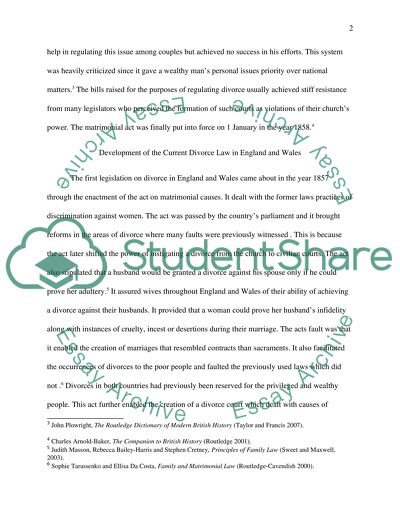 Download file to see previous pages The paper tells that in England and Wales, only men could openly file for divorce and get the chance of having it implemented. It could only be awarded through acts of their respective parliaments, which made the process very costly and affordable to only men. This implied that the proceedings of a divorce were only instigated by the wealthy men who could afford to pay for the proceedings. For example, in the time of King Henry VIII, he was awarded a divorce through a church court led by the Canterbury Archbishop. At around this time and in the following years, the church courts reserved the rights and powers of dissolving marriages and only favored men in their rulings. The governing bodies that were in charge of divorce before the enactment of the matrimonial act were the courts of Arches along with the Church of England’s cannon law. The law on divorce was not implemented by the common court barristers but by advocates practicing civilian laws thereby adding to the anonymity of this process. The civilian laws used were faulty and did not guarantee women their required rights in marriage. The issue of divorce was reserved for the rich men who could manage to finance private bills or ensure the enforcement of an annulment process that was very complex to work through. A couple’s marital issues were discussed in public courts with the proceedings being carried out in the common’s house. Lord Aberdeen proposed several bills that would create civilian courts to help in regulating this issue among couples but achieved no success in his efforts. This system was heavily criticized since it gave a wealthy man’s personal issues priority over national matters.3 The bills raised for the purposes of regulating divorce usually achieved stiff resistance from many legislators who perceived the formation of such courts as violations of their church’s power. The matrimonial act was finally put into force on 1 January in the year 1858.4 Development of the Current Divorce Law in England and Wales The first legislation on divorce in England and Wales came about in the year 1857 through the enactment of the act on matrimonial causes. It dealt with the former laws practices of discrimination against women. The act was passed by the country’s parliament and it brought reforms in the areas of divorce where many faults were previously witnessed . This is because the act later shifted the power of instigating a divorce from the church to civilian courts. The act also stipulated that a husband would be granted a divorce against his spouse only if he could prove her adultery.5 It assured wives throughout England and Wales of their ability of achieving a divorce against their husbands. It provided that a woman could prove her husband’s infidelity along with instances of cruelty, incest or desertions during their marriage. The acts fault was that it enabled the creation of marriages that resembled contracts than sacraments. It also facilitated the occurrences of divorces to the poor people and faulted the previously used laws which did not .6 Divorces in both countries had previously been reserved for the privileged and wealthy people. This act further enabled the creation of a divorce court which dealt with causes of matrimonial problems. It provided these courts with the power of hearing and deciding civilian actions concerning the issue of divorce which were only previously heard in the commons house. 7 The courts were first placed under the supervision of Sir Cresswell who was very successful in establishing their authority, self-esteem along with their efficiencies. These provisions were not present in the past legislations.  ...Download file to see next pages Read More
Share:
Tags
Cite this document
(“The Nature of Divorce Law in England and Wales Dissertation”, n.d.)
Retrieved from https://studentshare.org/law/1395195-the-nature-of-divorce-law-in-england-and-wales

(The Nature of Divorce Law in England and Wales Dissertation)
https://studentshare.org/law/1395195-the-nature-of-divorce-law-in-england-and-wales.

“The Nature of Divorce Law in England and Wales Dissertation”, n.d. https://studentshare.org/law/1395195-the-nature-of-divorce-law-in-england-and-wales.
Comments (0)
Click to create a comment or rate a document

It is observed that electroplating and chemical industries are responsible for the generation of a considerable portion of emissions that contain heavy metals, and may affect adversely on human lives and environment. On the other hand, sugar, pharmaceuticals, and textile industries are responsible for the generation of organic pollutants in the atmosphere. Refineries, fertilizers, stone mines, and thermal power units are mainly the causing sectors of contributing a substantial amount of air pollution in the Turkish atmosphere. In specific, sulfur, nitrogen, and hydrogen sulfide are some of the main pollutants that are generated from the burning of fuels in the abovementioned industries in Turkey. Though vehicular sources also cont...
7 Pages (1750 words) Case Study

In th...
8 Pages (2000 words) Case Study
sponsored ads
Save Your Time for More Important Things
Let us write or edit the dissertation on your topic "The Nature of Divorce Law in England and Wales" with a personal 20% discount.
GRAB THE BEST PAPER

Let us find you another Dissertation on topic The Nature of Divorce Law in England and Wales for FREE!