Comments (0)
Add to wishlistDelete from wishlist
Cite this document
Summary
From this research it is clear that while the majority of situations convey that morality provides a sturdy basis upon which the law is perched, there exist situations in which the law can be said to derogate from moral principles in the interests of certainty. …
Download full paperFile format: .doc, available for editing
HIDE THIS PAPERGRAB THE BEST PAPER97% of users find it useful 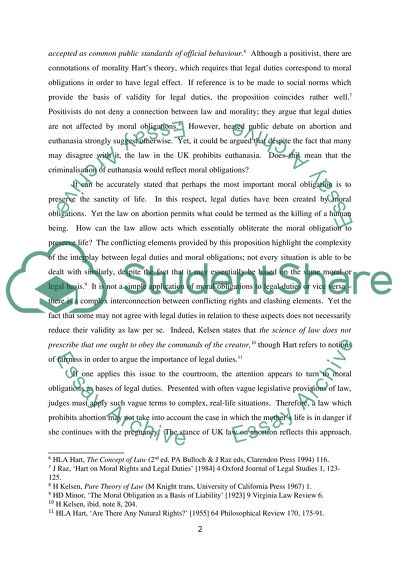 Download file to see previous pages The discussion seeks to answer the question: Does the law on abortion and euthanasia reflect moral obligations of society, or communal outlooks? Hart’s claims that legal duties must be effectively accepted as common public standards of official behaviour. Although a positivist, there are connotations of morality Hart’s theory, which requires that legal duties correspond to moral obligations in order to have legal effect. If reference is to be made to social norms which provide the basis of validity for legal duties, the proposition coincides rather well. Positivists do not deny a connection between law and morality; they argue that legal duties are not affected by moral obligations. However, heated public debate on abortion and euthanasia strongly suggest otherwise. Yet, it could be argued that despite the fact that many may disagree with it, the law in the UK prohibits euthanasia. Does this mean that the criminalisation of euthanasia would reflect moral obligations? It can be accurately stated that perhaps the most important moral obligation is to preserve the sanctity of life. In this respect, legal duties have been created by moral obligations. Yet the law on abortion permits what could be termed as the killing of a human being. How can the law allow acts which essentially obliterate the moral obligation to preserve life? The conflicting elements provided by this proposition highlight the complexity of the interplay between legal duties and moral obligations; not every situation is able to be dealt with similarly, despite the fact that it may essentially be based on the same moral or legal basis.9 It is not a simple application of moral obligations to legal duties or vice versa – there is a complex interconnection between conflicting rights and clashing elements. Yet the fact that some may not agree with legal duties in relation to these aspects does not necessarily reduce their validity as law per se. Indeed, Kelsen states that the science of law does not prescribe that one ought to obey the commands of the creator,10 though Hart refers to notions of fairness in order to argue the importance of legal duties.11 If one applies this issue to the courtroom, the attention appears to turn to moral obligations as bases of legal duties. Presented with often vague legislative provisions of law, judges must apply such vague terms to complex, real-life situations. Therefore, a law which prohibits ...Download file to see next pagesRead More
Share:
Tags
Cite this document
(“Medical Law, Morality and Legal Duties Essay Example | Topics and Well Written Essays - 2750 words”, n.d.)
Retrieved from https://studentshare.org/law/1394920-medical-law-morality-and-legal-duties
(Medical Law, Morality and Legal Duties Essay Example | Topics and Well Written Essays - 2750 Words)
https://studentshare.org/law/1394920-medical-law-morality-and-legal-duties.
“Medical Law, Morality and Legal Duties Essay Example | Topics and Well Written Essays - 2750 Words”, n.d. https://studentshare.org/law/1394920-medical-law-morality-and-legal-duties.
Comments (0)
Click to create a comment or rate a document

CHECK THESE SAMPLES OF Medical Law, Morality and Legal Duties

In th...
8 Pages(2000 words)Case Study
sponsored ads
Save Your Time for More Important Things
Let us write or edit the essay on your topic "Medical Law, Morality and Legal Duties" with a personal 20% discount.
GRAB THE BEST PAPER

Let us find you another Essay on topic Medical Law, Morality and Legal Duties for FREE!