Comments (0)
Add to wishlistDelete from wishlist
Cite this document
Summary
This research aims to evaluate and present The UK Employment Rights Act 1996. The researcher of this essay aims to pay special attention to redundancy payment, protection against work place discrimination and protection against unfair dismissal…
Download full paperFile format: .doc, available for editing
HIDE THIS PAPERGRAB THE BEST PAPER97.6% of users find it useful 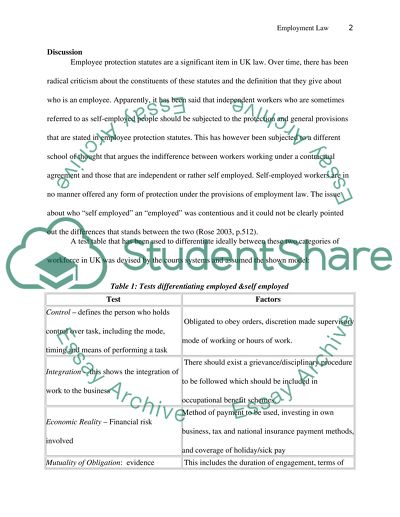 Download file to see previous pages The research paper “title” highlights the employment law as an integral part of the legal statutes that runs a country. The interest of employees is a vital issue that should not be left in the hands of the employers. It is for this reason that many countries have implemented laws that protect the interests of the employees as compared to theory independent or self-employed counterparts. In UK, several statutes have been realized all in an aim to represent the interests of the employees actively and conclusively. Employee protection statutes are a significant item in UK law. Over time, there has been radical criticism about the constituents of these statutes and the definition that they give about who is an employee. Apparently, it has been said that independent workers who are sometimes referred to as self-employed people should be subjected to the protection and general provisions that are stated in employee protection statutes. This has however been subjected to a different school of thought that argues the indifference between workers working under a contractual agreement and those that are independent or rather self employed. Self-employed workers are in no manner offered any form of protection under the provisions of employment law. The issue about who “self employed” an “employed” was contentious and it could not be clearly pointed out the differences that stands between the two. (Rose 2003, p.512). A test table that has been used to differentiate ideally between these two categories of workforce in UK was devised by the courts systems and assumed the shown model: Table 1: Tests differentiating employed &self employed Test Factors Control – defines the person who holds control over task, including the mode, timing and means of performing a task Obligated to obey orders, discretion made supervisory mode of working or hours of work. Integration - this shows the integration of work to the business There should exist a grievance/disciplinary procedure to be followed which should be included in occupational benefit schemes. Economic Reality – Financial risk involved Method of payment to be used, investing in own business, tax and national insurance payment methods, and coverage of holiday/sick pay Mutuality of Obligation: evidence showing formal subordination to contract terms This includes the duration of engagement, terms of engagement, right to refuse work, custom in the trade. Based on Burchell et al (1999, p.11) According to the table, the courts attempted to identify the dependency level of the person to the employer. This was deemed important in identifying the individuals that were reliable for the provisions that are as stated in the employment law statutes. However, the degree at which the factors in question are considered was ...Download file to see next pagesRead More
Share:
Cite this document
(“Employment Law In UK Essay Example | Topics and Well Written Essays - 2500 words”, n.d.)
Retrieved from https://studentshare.org/law/1393988-employment-law-in-uk
(Employment Law In UK Essay Example | Topics and Well Written Essays - 2500 Words)
https://studentshare.org/law/1393988-employment-law-in-uk.
“Employment Law In UK Essay Example | Topics and Well Written Essays - 2500 Words”, n.d. https://studentshare.org/law/1393988-employment-law-in-uk.
Comments (0)
Click to create a comment or rate a document

CHECK THESE SAMPLES OF Employment Law In UK

In th...
8 Pages(2000 words)Case Study
sponsored ads
Save Your Time for More Important Things
Let us write or edit the essay on your topic "Employment Law In UK" with a personal 20% discount.
GRAB THE BEST PAPER

Let us find you another Essay on topic Employment Law In UK for FREE!