Comments (0)
Add to wishlistDelete from wishlist
Cite this document
Summary
This paper will tell about whether Kosovo satisfies the criteria for statehood under international law. This analysis is based on general international practice, including the outcomes of statehood claims similar to that of Kosovo. …
Download full paperFile format: .doc, available for editing
HIDE THIS PAPERGRAB THE BEST PAPER97.9% of users find it useful 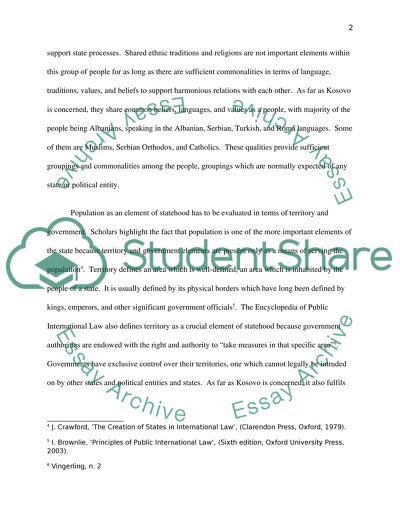 Download file to see previous pages In establishing whether a political entity can be considered a state, these elements have to be primarily considered. Applying these elements to the assessment of Kosovo, however, is not as simple due to a host of issues involved in its bid for statehood. Nevertheless, these primary elements shall first be considered in assessing Kosovo’s claim to statehood.
One of the elements of statehood is population. Population refers to the “a group of people that live in the same land or region” . In order for an entity to fulfil this requirement of statehood, its people must settle themselves at a definite place. There is an element of permanency to this population where the people are not likely to fall apart but can be expected to persist for a period of time . As far is Kosovo is concerned, it fulfils this requirement of statehood as it has a group of people living in a specific place and their population is sufficient to support state processes. Shared ethnic traditions and religions are not important elements within this group of people for as long as there are sufficient commonalities in terms of language, traditions, values, and beliefs to support harmonious relations with each other. As far as Kosovo is concerned, they share common beliefs, languages, and values as a people, with majority of the people being Albanians, speaking in the Albanian, Serbian, Turkish, and Roma languages. Some of them are Muslims, Serbian Orthodox, and Catholics. These qualities provide sufficient groupings and commonalities among the people, groupings which are normally expected of any state or political entity. Population as an element of statehood has to be evaluated in terms of territory and government. Scholars highlight the fact that population is one of the more important elements of the state because territory and government elements are present only as a means of serving the population4. Territory defines an area which is well-defined, an area which is inhabited by the people of a state. It is usually defined by its physical borders which have long been defined by kings, emperors, and other significant government officials5. The Encyclopedia of Public International Law also defines territory as a crucial element of statehood because government authorities are endowed with the right and authority to “take measures in that specific area”6. Governments have exclusive control over their territories, one which cannot legally be intruded on by other states and political entities and states. As far as Kosovo is concerned, it also fulfils this element of statehood, as it has a defined territory where its population is based and upon which it can support its people. Government is also another element of statehood. In general, governments are made up of individuals who have been chosen by the people or by other authorities to carry out political functions and to manage state affairs7. Based on the international perspective, governments are independent entities which enforce authority over a certain population living in a territory8. Governments are usually decided by the general population and in areas where democratic processes are in place, these government officials represent the interests of the people, enforce rules, and implement policies. Various states have varying governments, and each of these types of government is mostly fashioned to fit the needs of the people. Governments have end goals in mind and most of these goals relate to providing common goods to ...Download file to see next pagesRead More
Share:
Tags
Cite this document
(“Public international law Essay Example | Topics and Well Written Essays - 3750 words”, n.d.)
Retrieved from https://studentshare.org/law/1393957-public-international-law

... by the New York Public Library to the Crystal Bridges Museum of American Art in Arkansas, bankrolled by Alice Walton. It was a sealed auction, and the actual price paid remains unknown but it is estimated to have reached somewhere near $35 million, which was a record price paid at that time for an American art. It made headlines and rippled a controversy which continues to remain so. Many are of the belief that what happened was wrong and the painting should have stayed at the Durand’s home for much of his adult life. This painting may not be his paramount art work, but it is one of the icons of American art. Lumen Reed, a successful grocery wholesaler, facilitated Durand’s work by ordering a set of painted portraits of the first seven...
7 Pages(1750 words)Essay

Differing economic, cultural and political circumstances abroad also suggest the need for a better understanding of employees with a broad context is important. Fortunately, the ability to study the implications of policies on economic growth abroad is expanding rapidly as a result of the emergence of global private equity markets and micro finance. International entrepreneur ship spans cultural boundaries and involves a variety of stakeholders, including the entrepreneur, investors and policy makers (Asel, 2003). “Social considerations must be given the same status as economic, financial and environmental concerns in a holistic approach. It is time for global thinking and local action. The implementation of the Core Labour...
9 Pages(2250 words)Case Study

As a matter of fact, Hoffman’s statement that “international affairs is the nemesis of liberalism” has a grain of truth in it and this is especially so after the 9/11 incident.
There are two schools of thought or perspectives that are used to view international affairs: liberalism and realism. The study of these two perspectives is significant to the idea posed by Stanley Hoffman because they determine the reasons why international affairs, according to him, does not only see eye-to-eye with liberalism but seems to stand on the opposing side of it.
Liberalism can be defined as having four elements: citizens; the legislature; property rights, and; a market-driven economy (Dunne 186). Realism, on the othe...
6 Pages(1500 words)Assignment
sponsored ads
Save Your Time for More Important Things
Let us write or edit the essay on your topic "Public international law" with a personal 20% discount.
GRAB THE BEST PAPER

Let us find you another Essay on topic Public international law for FREE!