Comments (0)
Add to wishlistDelete from wishlist
Cite this document
Summary
This paper contains the answer to the next assignment: Your managing partner has handed you the decision of The Congregation of the Religious Sisters of Charity of Australia & Ors v The Attorney General in and for the State of Queensland. …
Download full paperFile format: .doc, available for editing
HIDE THIS PAPERGRAB THE BEST PAPER95% of users find it useful 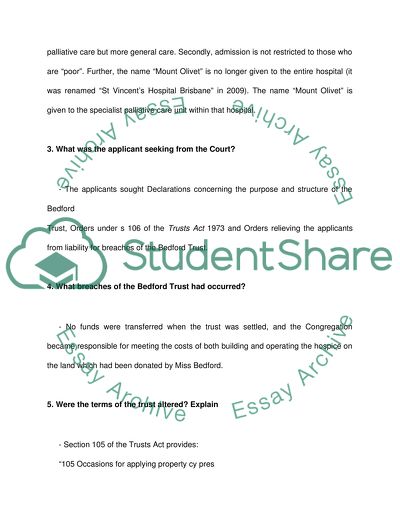 Download file to see previous pages In the case of The Congregation of the Religious Sisters of Charity of Australia & Ors v The Attorney General in and for the State of Queensland [2011] QSC 100 , the Bedford Trust was a gift of land made by Mary Josephine Bedford in February 1952 to the Religious Sisters of Charity of Australia for the purpose of building of a hospice for the “sick and dying who are poor”, to be called Mount Olivet Hospice. It was also to be built to commemorate the life and work of Dr. Lillian Cooper.

2. What terms of the trust were not being fulfilled?

- The evidence establishes that the terms of the trust are not presently being fulfilled in two substantial respects. First, the Mount Olivet Hospital now does not only provide palliative care but more general care. Secondly, admission is not restricted to those who are “poor”.

3. What was the applicant seeking from the Court?

4. What breaches of the Bedford Trust had occurred?

In th...
8 Pages(2000 words)Case Study
sponsored ads
Save Your Time for More Important Things
Let us write or edit the essay on your topic "Australian Company Law" with a personal 20% discount.
GRAB THE BEST PAPER

Let us find you another Essay on topic Australian Company Law for FREE!