Comments (0)
Add to wishlist Delete from wishlist
Cite this document
Summary
It is a development that has come with the arrival of touch screen technology. The interfaces are programmed systems that produce mechanical signals experienced in daily life applications…
Download full paper File format: .doc, available for editing
HIDE THIS PAPERGRAB THE BEST PAPER98.1% of users find it useful 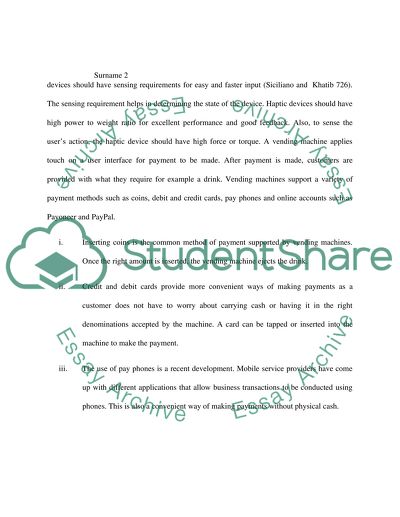 Haptic Haptic refers to the use of sensory touch to get information in a user interface design. It is a development that has come with the arrival of touch screen technology. The interfaces are programmed systems that produce mechanical signals experienced in daily life applications (Grunwald 362). Scholars assert that this technology goes beyond scientific research and is important since it is applicable in numerous fields. Areas of haptic use include art and leisure, where interaction with audio designs generates charming and interactive experiences that entertain the user. Haptic is used in supporting cognitive tasks performance e.g. in children with low attention, mental problems and brain injury, by enhancing mental imagery and verbalization systems. Furthermore, haptic can be used in communication as it gives feedback at the point of interaction by the user (Hatzfeld and Kern 21). It also enables conveying of information in demanding environments. Haptic can also be used in tactile interfaces to help in navigation by the visually impaired and blind people (Henderson ‎and Pehoski 77).
For haptic devices to be effective, there are functional and data requirements. These include reliability and uniformity so that consistent perceptual effects are obtained. Haptic devices should have sensing requirements for easy and faster input (Siciliano and ‎ Khatib 726). The sensing requirement helps in determining the state of the device. Haptic devices should have high power to weight ratio for excellent performance and good feedback. Also, to sense the user’s action, the haptic device should have high force or torque. A vending machine applies touch on a user interface for payment to be made. After payment is made, customers are provided with what they require for example a drink. Vending machines support a variety of payment methods such as coins, debit and credit cards, pay phones and online accounts such as Payoneer and PayPal.
i. Inserting coins is the common method of payment supported by vending machines. Once the right amount is inserted, the vending machine ejects the drink.
ii. Credit and debit cards provide more convenient ways of making payments as a customer does not have to worry about carrying cash or having it in the right denominations accepted by the machine. A card can be tapped or inserted into the machine to make the payment.
iii. The use of pay phones is a recent development. Mobile service providers have come up with different applications that allow business transactions to be conducted using phones. This is also a convenient way of making payments without physical cash.
iv. Online payment methods are increasingly being adopted in the modern computing world. Examples include PayPal, Dwolla, Stripe and payoneer among others. These applications are installed in devices and a user gets a username and password.
For the data requirements, there is need for efficiency and bandwidth to allow for the attainment of high output from the system. Vending machines have LCD screens that users use to enter the necessary details such as PINs, usernames and passwords. Other functionalities such as ways to accept or decline making a purchase or choosing a product’s quantity and type are provided. In conclusion, haptic includes the daily life mechanical signals arising from the involvement of sight, sound and touch. In this paper, a vending machine as an example of a device applying haptics is discussed.
Works Cited
Grunwald, Martin. Human Haptic Perception: Basics and Applications. Basel: Birkhauser Verlag, 2008. Print.
Hatzfeld, Christian and Thorstern A. Kern. Engineering Haptic Devices: A Beginner’s Guide. London: Springer, 2014. Print.
Henderson, Anne ‎and Charlane Pehoski. Hand Function in the Child: Foundations for Remediation. St. Louis, MO: Mosby Elsevier, 2005. Print.
Siciliano, Bruno and ‎Oussama Khatib. Springer Handbook of Robotics. Berlin: Springer, 2008. Print. Read More
Share:
Tags
Cite this document
(“Haptic Essay Example | Topics and Well Written Essays - 250 words - 1”, n.d.)
Haptic Essay Example | Topics and Well Written Essays - 250 words - 1. Retrieved from https://studentshare.org/information-technology/1695908-haptic

CHECK THESE SAMPLES OF Haptic

... to be suitable for any common interpersonal communication situation. Also, there are certain proxemic and haptic rules embedded in the unconscious mind of an Indian, which differ, based on gender as well as age. Respecting the elderly is a part of Indian culture. Keeping a ‘decent’ physical distance from women is also part of this culture. Hargie (p.344) has observed that “Indian culture places a very high value on acceptance, self-suppression and concern for the feelings of others.” In India, touch between a man and a woman who are not married is most often highly improper. Same sex touching is common among Muslims whereas this is not so common among Hindus (Krueger, 2008, p.6). But in this culture, even a mother will not usually embrace...
2 Pages (500 words) Essay

...my teeth but try to ask me about it after work and I have no more memory of it. Echoic memory is what I often experience whenever I listen to the radio and turn it off before I turn in for the night. I have noticed that even as I am beginning to close my eyes I can still hear myself singing the chorus part of the last song I heard playing on the radio, but ask me about it when I wake up and I can seldom if ever recall what it is. Haptic memory is also one thing I experience at times. At the office, sometimes I shake hands with a client and I could feel either the wetness of his hand or the tightness of his grip. Nevertheless, after a short while, when we have got down to business, I honestly do not have any more memory of such a grip nor...
4 Pages (1000 words) Essay

Pick one topic from the attachment, which includes the description of what the instructor

...important in interacting with animals and where touch is necessary and in dealing with touch based technological materials. Shake hand is an example of haptic communication. In my observation haptic communication is in use from centuries to express a person’s feeling and most people will find them incomplete if they don’t find a person to express their emotion through touch. Posture identifies the attention of a person towards a certain mater or towards a person and in my observation it is the most noted nonverbal communication tool. Gesture is a body movement like a wink, a wave of hand or shake of head. Eye movements are considered a method of nonverbal communication that is used to express emotions,...
3 Pages (750 words) Essay

...its production. Key Issues: Haptic feedback issues are sorted into three categories such as info communication, control and other cognitive aspects. Performance of force feedback control is influenced by the uncertainties, time delay, and non liberalities. Info communication is another point as time delay for the switch packets creates problems. Cognitive process is another problem created by the sensation of incoming information during virtual and remote interaction (Galambos, 2012). Importance: Haptic feedback is used in the simulators for medical assessment and training. It is also equally important for minimally invasive surgery (MIS). It is also useful for the study of the surgical skills. It is...
4 Pages (1000 words) Assignment

... be found in research literature. In general a consistent design is have, (1) internal interface design consistency and (2) external consistency of interface features with features of other interfaces familiar to the users. Users can obtain convenient, less expensive and versatile products by consistent designs. Example: the training time is 100% to 300% less compared to the random user interface design. Nevertheless some researchers advocate that diverting primary focus from users and their needs into consistency, as narrowing the spectrum of software engineering (Grudin, 1989). Haptic Technology MacLean, 2000, defines “haptic feedback” as the “computer control over the tactile or kinesthetic properties of a physical interface, permitting...
4 Pages (1000 words) Essay

Towards Empathic Touch by Relational Agents

... to be “comfortable and organic”, the haptic output device has a glove on it “with an air bladder sewn into the palm” [2]. The design of the device helps it to synchronize its dialogues with the mode of touch [2]. Around 27 unique touch gestures comprised the emotional range incorporated into the device [2]. Intensity and duration of touch was also manipulated in this [2]. 3.2 “Touchbots”- Individual Variations In the second paper, an important aspect was that apart from user responses, the biological reactions of the body of the users were also assessed. The researchers have revealed that “user heart rate and galvanic skin conductivity were recorded continuously at 256 Hz, using finger-clip sensors.” [3]. Twenty one subjects participated...
8 Pages (2000 words) Research Paper

... a user in interacting with entirely virtual objects" (p. 411). Every gadget in todays world functions with the use of computerized systems. Haptic feedbacks can either be in form of vibrations or senses that identify the location of the objects or bodies, as well as movements. Haptic feedback in form of vibrations is used mainly in touch-screen mobile phones whereby the phones vibration system recognizes a touch on the screen by the user (Bourg and Bywalec, 2013). In essence, the touch-screen mobile phone to some extent vibrates in order to substitute for a typical or ordinary physical reaction from a push button. In terms of senses, Bourg and Bywalec (2013) emphasizes that haptic feedback is used in the creation of joysticks to play games...
4 Pages (1000 words) Assignment

...HCI Reading Journal- Peer Review #3 Number Reply for Benjamin Berger’s Observations Observation The haptic feedback has greatly impacted the way we interact with the user interfaces in the current computing age. Essentially, it has transformed the user interface into a more interactive platform than before. If I compare the first game I played that was merely controlling outcomes without much output from the interface and the current interactive game designs I am able to appreciate the contribution of haptic feedback in design of user interfaces. Observation 2 I have also used a Samsung galaxy Smartphone for quite some time and I have experienced the flexibility it accords me with regard to user interface. Unlike most phones that are rigid...
2 Pages (500 words) Research Paper

...their reactions. The mental model encompasses operations that work in just like the computer. Most of the computer interfaces developed for visually impaired individuals are designed for those who have not lost their sight completely. Many HCI use several other types of feedback such as haptic and tactile feedback system. However, these interfaces are normally supplemental to the visual communication. As such, it is essential to note that those who have not lost their sight completely will be in an enhanced position to access several computer applications based on the haptic and tactile system, Clifford (2008). When interacting with the computer, some of the critical movements very useful include...
1 Pages (250 words) Assignment

Is There a Connection between Human Freedom and Modern Physics

Let us find you another Essay on topic Haptic for FREE!