Comments (0)
Add to wishlistDelete from wishlist
Cite this document
Summary
male and female through the depiction of several posters and speeches can be found in Chapter 5 of the book “Homogenizing a Pluralistic Nation: World War I”. This inequality is also observed among the White and…
Download full paperFile format: .doc, available for editing
HIDE THIS PAPERGRAB THE BEST PAPER96.9% of users find it useful 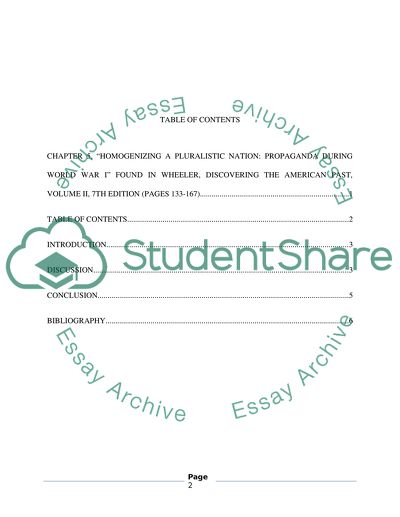 CHAPTER 5, “HOMOGENIZING A PLURALISTIC NATION: PROPAGANDA DURING WORLD WAR I” FOUND IN WHEELER, DISCOVERING THE AMERICAN PAST, VOLUME II, 7TH EDITION(PAGES 133-167)
TABLE OF CONTENTS
CHAPTER 5, “HOMOGENIZING A PLURALISTIC NATION: PROPAGANDA DURING WORLD WAR I” FOUND IN WHEELER, DISCOVERING THE AMERICAN PAST, VOLUME II, 7TH EDITION (PAGES 133-167) 1
TABLE OF CONTENTS 2
INTRODUCTION 3
DISCUSSION 3
CONCLUSION 5
BIBLIOGRAPHY 6
INTRODUCTION
The scenario of inequality prevailed amid the two genders i.e. male and female through the depiction of several posters and speeches can be found in Chapter 5 of the book “Homogenizing a Pluralistic Nation: World War I”. This inequality is also observed among the White and Black Americans1. Contextually, the prime intent of this essay is to ascertain the portrayal of the Germans and also analyze the images of women considering the gender roles of the time i.e. during World War I.
DISCUSSION
In the book of “Discovering the American Past”, the Germans were portrayed as they possessed superior culture as compared to that of the people of other countries throughout the globe. This was mainly observed during the World War I. Evidently, this portrayal of the Germans eventually raised several questions regarding the equality of the Black American soldiers to that of the White people of the nation. The Germans raised questions regarding the black Americans to be the second citizen of the nation, wherein priorities and better opportunities were only limited to the White people. They further asserted that the Black American soldiers were treated as slaves by the nation and would not get any benefit from the war whatsoever be the result of the same. Thus, the Germans were portrayed as of holding superior culture, which gives equal position to all the people in the world2.
The intended audience of the posters depicted in the book can be apparently noted as all the people residing within this world. However, the posters were exclusively for the civilians of the US and Germany, wherein the actual scenario of the World War I was depicted in such posters clearly. Moreover, the author collected certain posters from various sources with the objective that the viewers might feel the actual emotions of the sentiments of the people involved and affected in the war3.
The women in the images were portrayed as the saviors of America from the war. The posters revealed the usage of several stamps for saving the US from the war. The images also depicted the usage of weapons by the American women in order to save the nation from the ill-effects generated from the war, if any. Furthermore, certain images revealed the recruitment procedure of the women in the US armed force. Correspondingly, the images also showed the war of women for their liberty in the society4.
By taking into concern the above discussed facts, it can be affirmed that the different images portrayed in the book revealed the persistence of inequality within the two genders of the society. In precise, it can be affirmed that the images of women depict the gender roles of the time in the form of using weapons for establishing equality in the society wherein there existed a need for saving the nation5.
CONCLUSION
From the above analysis and discussion, it has been quite evident that the posters and the speeches depicted in the above stated book portray the inequality persisting between the black and white people in the US along with the similar condition observed amid the two genders of the society. Specially mentioning, the images depict the steps that had been taken by the black Americans and the women for promoting the aspects of liberty and equality. In conclusion, it can be stated that the book is a step to understand the need of equality and liberty amid all the individuals.
BIBLIOGRAPHY
Alonzo Earl Foringer, Haskell Coffin, Joseph Christian Leyendecker, G. R. Macauley, Charles Dana Gibson, and Howard Chandler Christy. “Homogenizing a Pluralistic Nation: Propaganda During World War I” in William Bruce Wheeler, Susan D. Becker, and Lorri Glover, Discovering the American Past: A Look at Evidence, Vol. II (Boston: Wadsworth Cengage Learning, 2012), 133-167. Read More
Share:
Tags
Cite this document
(“Chapter 5, Homogenizing a Pluralistic Nation: Propaganda During World Essay”, n.d.)
Retrieved from https://studentshare.org/history/1659158-chapter-5-homogenizing-a-pluralistic-nation-propaganda-during-world-war-i-found-in-wheeler-discovering-the-american-past-volume-ii-7th-edition-pages-133-167

CHECK THESE SAMPLES OF Chapter 5, Homogenizing a Pluralistic Nation: Propaganda During World War I found in Wheeler, Discovering the American Past, Volume II, 7th edition (pages 133-167)

World War I and II

...been as a result of the Slavic people fighting for nationalism and Russia was very crucial in enhancing these ideals. The search for identity continued during World War II. All these circumstances led to the Second World War but the invasion of Poland in 1939 by Germany was the immediate cause. France was not satisfied with Britain’s appeasement policy and pressured it to declare war on Germany. Italy joined the war as an ally of Germany as it was not satisfied with the outcome of World War I. It did not get what Britain had promised at...
8 Pages(2000 words)Essay

... of the of the Concerned History and Political Science 17 December World War I and World War II The two World Wars were events that included within their ambit a great number of the most populated and influential nations of the world. The battles affiliated to these two wars were fought in varied theaters spread across many countries and almost all the continents. The World War I and the World War II led to massive causalities, bloodshed and destruction in almost all the theatres in which they were fought. The number of people killed and wounded in these two wars amounted to millions. It also needs to be mentioned that in the two Wars the people who suffered were not merely soldiers but also included civilians, old people, women... , the...
5 Pages(1250 words)Essay

...Major Events during World War II World War II began in 1941. The great depression, which hit United and other partsof the world in 1930, was one of the major causes of World War II. The great depression which occurred as a result of market crash in United States weakened the economic status of the entire world; rivalry was witnessed, failure to repay debts led to mistrust. Japan, Germany, and Italy, after the World War I was so anxious to recuperate their powers, this led to dictatorship...
5 Pages(1250 words)Essay

..."World War I Propaganda" In April 1917, the U.S.A. entered World War I and within no time produced many propaganda posters. These posters were to encourage the civilians to take the war seriously and to encourage them to support their soldiers for their small requirements so that they can fight at the front with ample of resources and with peace of mind. These posters included messages for recruitment to the various armed services, along with the means to raise war funds, to save food for the soldiers at the front. These posters were made to motivate the mass of America...
1 Pages(250 words)Essay

..., 1972:40). The activity of the created organizations, which dealt with propaganda were successful and brought good results. For example, more people started entering such organizations as Red Cross. Less people tended to join those who propagated the end of the war and peace establishment (McQuail, 1969:5). Germany became the victim of the informational and psychological operations of the opponents. Under the informational pressure the revolution started in Germany and led to its failure in the World War I (Knightley, 2002: 4). The World War II represented a check of violability of the...
4 Pages(1000 words)Research Paper

Discovering the American Past in World War 1

...during the war, grievous pictures and photographs of women and children were used in posters. On the other hand, modern magazine advertisement that contained beautiful woman represented attractiveness and therefore success in ending the war. Moreover, gender roles during World War I were mainly to help and control the intensity of the war. Conclusion World War I portrayed American as a nation concerned with the growth and peaceful well-being of people around the world. It did this through prevention in...
2 Pages(500 words)Essay
sponsored ads
Save Your Time for More Important Things
Let us write or edit the essay on your topic "Chapter 5, Homogenizing a Pluralistic Nation: Propaganda During World War I found in Wheeler, Discovering the American Past, Volume II, 7th edition (pages 133-167)" with a personal 20% discount.
GRAB THE BEST PAPER

Let us find you another Essay on topic Chapter 5, Homogenizing a Pluralistic Nation: Propaganda During World War I found in Wheeler, Discovering the American Past, Volume II, 7th edition (pages 133-167) for FREE!