Three policies that led to the outbreak of War in Europe in 1914. What nation is primary responisble - Essay Example

Comments (0)
Add to wishlistDelete from wishlist
Cite this document
Summary
The war lead to death of millions of people and left many others severely injured. People were separated from their loved ones since some were forced to free from the war torn areas and…
Download full paperFile format: .doc, available for editing
HIDE THIS PAPERGRAB THE BEST PAPER98% of users find it useful 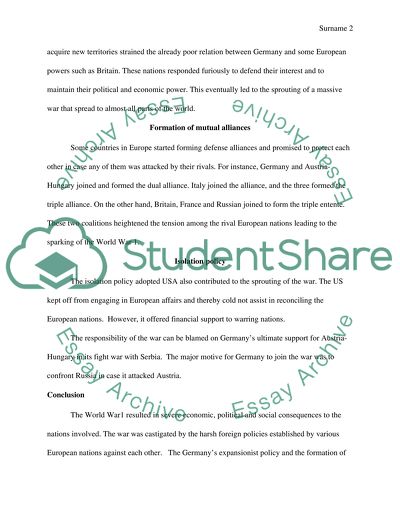 Extract of sample "Three policies that led to the outbreak of War in Europe in 1914. What nation is primary responisble"

Introduction The war that occurred in 1914 was among the worst wars ever experienced in human history. The war lead to death of millions of people and left many others severely injured. People were separated from their loved ones since some were forced to free from the war torn areas and seek refuge in the neighboring peaceful countries (Afflerbach and Stevenson 94). The War can be attributed to the harsh policies adopted by various European nations in their quest to assert political and economic superiority. Each nation was struggling to emerge as the world’s economic power. For instance, Germany established aggressive foreign policies that created unhealthy relationship with other nations. The policies deteriorated the existing peaceful trading partnerships and eventually led to the poor performance of the international market. The three policies that fuelled the war were; the Germany’s expansionist policy, the emergence of two opposing sides (the triple alliance and the triple alliance) and the isolation policy.
The Germany’s expansionist policy
Germany had a great urge to dominate the world economy. The only means to achieve this was by acquiring more territories and colonies. By this time, the world was portioned among the major powers such as the Britain. In this regard, Germany had to use military conquest to acquire territories that were already possessed by other European nations. The use of force to acquire new territories strained the already poor relation between Germany and some European powers such as Britain. These nations responded furiously to defend their interest and to maintain their political and economic power. This eventually led to the sprouting of a massive war that spread to almost all parts of the world.
Formation of mutual alliances
Some countries in Europe started forming defense alliances and promised to protect each other in case any of them was attacked by their rivals. For instance, Germany and Austria-Hungary joined and formed the dual alliance. Italy joined the alliance, and the three formed the triple alliance. On the other hand, Britain, France and Russian joined to form the triple entente. These two coalitions heightened the tension among the rival European nations leading to the sparking of the World War 1.
Isolation policy
The isolation policy adopted USA also contributed to the sprouting of the war. The US kept off from engaging in European affairs and thereby cold not assist in reconciling the European nations. However, it offered financial support to warring nations.
The responsibility of the war can be blamed on Germany’s ultimate support for Austria-Hungary in its fight war with Serbia. The major motive for Germany to join the war was to confront Russia in case it attacked Austria.
Conclusion
The World War1 resulted in severe economic, political and social consequences to the nations involved. The war was castigated by the harsh foreign policies established by various European nations against each other. The Germany’s expansionist policy and the formation of allies deteriorate the existing friendship thereby causing the war. From the lessons learnt from the first and second world war, leaders from all parts of the world should work together to avert any incident that might result in another global war.

“Three Policies That Led to the Outbreak of War in Europe in 1914. What Essay”, n.d. https://studentshare.org/history/1658682-three-policies-that-led-to-the-outbreak-of-war-in-europe-in-1914-what-nation-is-primary-responisble.
Comments (0)
Click to create a comment or rate a document

CHECK THESE SAMPLES OF Three policies that led to the outbreak of War in Europe in 1914. What nation is primary responisble

...? FURIES – WAR IN EUROPE FURIES – WAR IN EUROPE Second age of invasions is a very crucial time in the history of Europe. This period was a time of war for the entire Christian Europe with the Muslims and the Vikings. This era was a time of immense brutality as the Christians residing in Europe became a victim of external forces that had started to overpower them. In my paper I would like to discuss the impact of Vikings on the second age invasion. During the time of 793AD, the Vikings started to raid on the monastery belonging to the Christians in the area of Lindisfarne situated in the north east side of...
4 Pages(1000 words)Book Report/Review

... it has the capabilities to change the way a reader thinks about the wars. Much of those issues are debated in the history which is why authors have failed to write over them, but Martines successfully analyses the primary sources he used and writes a book which changes the mindset of many interested readers. The book is highly recommended to those readers who want to know the unknown side of the war in Europe and how it has contributed to the shaping of the continent at the cost of such brutality and violence. References Lauro, Martines. Furies: War in Europe 1450-1700. NY: Bloomsbury Press, 2013.... ? Furies-War in Europe Furies-War in Europe Martines is a renaissance...
4 Pages(1000 words)Book Report/Review

...dramatizing these aforementioned events, called as the “Rape of Belgium,” which caught the attention of the United States. Berlin supported such propaganda and concluded its legality due to threat of guerillas. The French and British disseminated the reports in their respective nation, as well as in the United States, which caused other nations to dissolve their support for Germany (Manning and Romerstein 324-325). Protest, Revolution, and the End of World War 1 Right after the fighting on all fronts in Europe in 1914, Germany refused to admit its fault as the primary cause of warfare. In 1915, the United States launched a protest as...
5 Pages(1250 words)Term Paper

The Outbreak of World War I

...on the 28th of July 1914. Germany, bound by treaty to Austria-Hungary, perceived the announced mobilisation as an open act of war against the ally and proceeded with the declaration of war on Russia on 1 August, 1914. France entered the war against Germany (and Austria-Hungary, bound by treaty to Germany) following a German declaration made on 3 August, 1914. Britain followed the provisions of her alliance with France and declared war against Germany the next day after Germany invaded Belgium to reach Paris via the shortest possible route (Strachan, 2001). Seemingly, these three states can barely be...
8 Pages(2000 words)Essay

...Pre First World War: 1914 Until 1914, a woman’s hair was her crowning glory. In the early 1900s, pads and frames of false hair were common with womenwho wanted their hair to appear full and soft. This pompadour style was achieved by supports and back combing. Back combing involved pulling all the back hair into a plait or flat coil and drawing the hair into the crown of the head. In 1902, a pompadour style called the transformation was widely used (Conway 2004). The transformation product was made of natural hair that could be waved and it transformed any hair style into one with an abundant amount of waves. This transformation product was supported by a pompadour frame that was easily...
4 Pages(1000 words)Essay

... America and the Great War (1914-1920) The United s was not prepared to participate into the First World War. Itis until 1918 that American government published the official reasons why the United States chose to participate, in the World War, in order to show its support for the war. The Committee for Public Information was responsible for distributing this information. The reasons for America’s involvement into the First World War include the renewal of Germany’s submarine warfare; Germany was becoming an international desperado; Prussian autocracy and Military threatened to destroy the international equilibrium and interfered with the balance of power; the America’s tradition of isolation had become out of control, and it could... . They...
2 Pages(500 words)Research Paper

...for the no-resistance, despite the sporadic fighting outbreaks. The students endeavoured to stop the Soviet tanks, and tried to involve the NATO. With over 70,000 Czech refugees, non-violent resistance took place. The president was arrested and taken to Moscow, but mass resistance led to his return to Czech. The later protests led to the removal of Dubcek as the president, and he was replaced by Gustav Husak who launched the normalisation programme (Conference Six Focus – topic 1). What overall impression of Czech attitudes towards the political fortunes of their nation do you get from Under a Cruel Star? The impression obtained from the Czech political fortunes is...
2 Pages(500 words)Assignment

...The First World War that erupted in 1914 was an outcome of multifaceted circumstances and scenarios. It had its root causes in political, social, economic and ideological backgrounds. The road towards First World War was in making since the middle of 19th century. Military alliances, subjects’ hostility towards their masters, diplomatic failures all these resulted in the outbreak of the war. The Ottoman Empire that had long ruled over the subjects had gone frail in recent times, giving rise to a vacuum within. This led to the fight within between the Big three of Europe. The German armament and the...
1 Pages(250 words)Assignment

...Measles Outbreaks The Measles outbreak of is perhaps one of the largest, after recent record highs in Then the cases went down, 54 in 2012 and 189 in 2013. Reports show that measles cases are on the rise in other countries, too, especially in Turkey, Philippines, Vietnam and Germany. So far, there are about 160 confirmed cases in the United States in 2014. This figure is expected to continue rising due to unconfirmed cases. Recent measles exposures include 59 cases in Ohio, 38 in Knox County, 6 in Holmes, 1 in Wayne and 1 in Richland. This is a record high, beating the recorded 58 cases in 2013, in New York City (Turncock, 2012). The US has sufficient health structures in place and measles vaccine are usually given to people, so... Outbreaks ...
1 Pages(250 words)Essay
sponsored ads
Save Your Time for More Important Things
Let us write or edit the essay on your topic "Three policies that led to the outbreak of War in Europe in 1914. What nation is primary responisble" with a personal 20% discount.
GRAB THE BEST PAPER

Let us find you another Essay on topic Three policies that led to the outbreak of War in Europe in 1914. What nation is primary responisble for FREE!