Comments (0)
Add to wishlistDelete from wishlist
Cite this document
Summary
The Sumerian Civilization was certainly not exclusively male dominated as there is ample historical evidence to prove a potent feminine presence in the Sumerian temporal politico-social life and its spiritual and metaphysical constructs. Thereby, the argument facilitated by…
Download full paperFile format: .doc, available for editing
HIDE THIS PAPERGRAB THE BEST PAPER94.5% of users find it useful 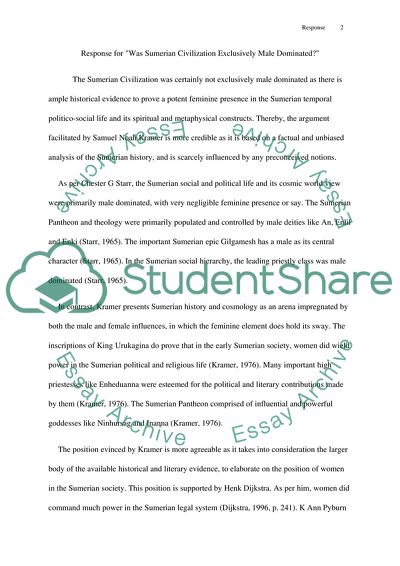 Response for "Was Sumerian Civilization Exclusively Male Dominated?" of the History of the Concerned September 15, Response for "Was Sumerian Civilization Exclusively Male Dominated?"
The Sumerian Civilization was certainly not exclusively male dominated as there is ample historical evidence to prove a potent feminine presence in the Sumerian temporal politico-social life and its spiritual and metaphysical constructs. Thereby, the argument facilitated by Samuel Noah Kramer is more credible as it is based on a factual and unbiased analysis of the Sumerian history, and is scarcely influenced by any preconceived notions.
As per Chester G Starr, the Sumerian social and political life and its cosmic world view were primarily male dominated, with very negligible feminine presence or say. The Sumerian Pantheon and theology were primarily populated and controlled by male deities like An, Enlil and Enki (Starr, 1965). The important Sumerian epic Gilgamesh has a male as its central character (Starr, 1965). In the Sumerian social hierarchy, the leading priestly class was male dominated (Starr, 1965).
In contrast, Kramer presents Sumerian history and cosmology as an arena impregnated by both the male and female influences, in which the feminine element does hold its sway. The inscriptions of King Urukagina do prove that in the early Sumerian society, women did wield power in the Sumerian political and religious life (Kramer, 1976). Many important high priestesses like Enheduanna were esteemed for the political and literary contributions made by them (Kramer, 1976). The Sumerian Pantheon comprised of influential and powerful goddesses like Ninhursag and Inanna (Kramer, 1976).
The position evinced by Kramer is more agreeable as it takes into consideration the larger body of the available historical and literary evidence, to elaborate on the position of women in the Sumerian society. This position is supported by Henk Dijkstra. As per him, women did command much power in the Sumerian legal system (Dijkstra, 1996, p. 241). K Ann Pyburn also mentions the important role played by women in the Sumerian political hierarchy (Pyburn, 2004, p. 34). As per Pyburn, the feminine element is distinctly visible in the Sumerian political history and cosmology.
References
Dijkstra, H. (1996). History of the Ancient and Medieval World. New York: Marshall
Cavendish.
Kramer, S.N. (1976). Poet and Psalmists: Goddesses and Theologians: Literary, Religious,
and Anthropological Aspects of the Legacy of Sumer. In D. Schmandt-Besserat (Eds.),
The Legacy of Sumer: Invited Lectures on the Middle East at the University of Texas at
Austin. New York: Undena Publications.
Pyburn, K.A. Ungendering Civilization. New York: Routledge.
Starr, C.G. (1965). A History of the Ancient World. New York: Oxford University Press. Read More
Share:
Tags
Cite this document
(“Response for Was Sumerian Civilization Exclusively Male Dominated Essay”, n.d.)
Retrieved from https://studentshare.org/history/1657286-response-for-was-sumerian-civilization-exclusively-male-dominated

...?Ferguson, Niall. Civilization: The West and the Rest. London: Allen Lane, Print. of 30 November 2013 Book Review - Civilization: The West and the Rest by Niall Ferguson Western world is deemed as a symbol of progress, achievement and dominance in the contemporary world of today. Over the years, historians have toiled to explain the reason for this supremacy and have struggled to elaborate how the Western world became eminent in the economic and political global scenario and also, why so many people, all over the globe, want to adopt Western lifestyle and are fascinated by the Western culture. Historian Niall Ferguson claims to have an absolute answer to this issue in his book named...
6 Pages(1500 words)Book Report/Review

... Why did writing develop in Sumerian civilization What uses was it put to How did those uses changeover time Why is record-keeping important for western civilization The Sumerian civilization progressed in an advanced manner to build towards structured Monarchy. The administrative control of every city was properly built and the hierarchy of rule developed in the form of consistent and uniform roles over this time period. The administrators and the rulers, in the form pf Priests and King Priests, took up their roles to survey land, and to make arrangements to properly and equally divide any surplus supplies of food among cities and people. Furthermore, there was fast growth in the development of educational services that required... the...
13 Pages(3250 words)Essay

The Male and Female Self in European Civilization

...The Male and Female Self in European Civilization The Middle Ages, for many scholars, evoked notions of a hierarchal structure in which everyone occupied a carefully defined place and status in society. The idea of self and identity was cautiously tied to class, religion, gender or kinship and the functions of women were closely linked to the social standing of their husbands or the men who revolved around them. However, several men and women in this period explored new approaches to conflicts brought about by the limitations imposed on both genders and the monopoly of the church over men and women. Some of these people counteracted gender constraints, utilized these limitations and challenged restrictions through their ingenious... and a...
11 Pages(2750 words)Essay

...and metal tools. Writing emerged as a means of communication invented mainly to deal with urban problems of management and book keeping. On the social front, people were grouped into classes based on control of resources, wealth, political authority, family, or religion. The First Civilization in History By 3000 B.C.E., the Sumerians in south Babylonia (Southern Mesopotamia) founded the oldest cities of Ur, Nippur, and Uruk; the largest city in the world. Quarrels over water and agricultural land led to increased warfare to create kingdoms ruling several city states. The city of Kish in north Babylonia had the first king in history. In the far east of Babylonia, the Akkadians established the first...
6 Pages(1500 words)Essay

... Single Civilization Throughout history, there have been inventions and exemplary leadership that have revolutionized military civilizations. The period through 3000BC to 1700AD saw a number of empires rise and fall. Sargon founded the Akkad dynasty around 3000BC. He marked his reign with great warfare tactics. This empire upheld warfare as its way to advance commerce and create and empire that was strong, steady and self-supporting. This paper documents Sargon’s endeavors and strategies that make his reign standout in terms of military civilization. Sargon popularized warfare in his dynasty to a point where it became a central part of the life of his armies. Siege was his troupes’ basic tactic of war. Akaddian armies used weapons... up with...
1 Pages(250 words)Research Paper

...Civilization Farming Traditional farming was very good and environmental friendly since there was rare signs of environmental degradation as farmers were concerned with ecological changes. The current capital-technology intensive farming has largely led to serious environmental degradation because the farmers and scientist only focus on long term sustainability of food production and low cost food (Muttulingam Web). Technology has really contributed to monoculture through the introduction of agrochemical that has provided fertilizers, insecticides and pesticides. The ever increasing population and the current global hunger are what prompt the use of new technologies which are very harmful in the society. It is...
1 Pages(250 words)Essay

...﻿Male Cultural Competence response Part A Gender issues are indeed important aspects of the study, considering their significance in different societies, most especially from the multicultural competency issues. Based on such a perspective therefore, it is important to include men and their issues of masculinity into multicultural competencies, as such would increase the understanding of others by different individuals such as clinicians in aspects of diversity (Ming Liu, 2005). Ideally, mush focus has been established on various sociopolitical histories of individuals and experiences based on color variance. Therefore, the multiculturalism cornerstone remains in establishing an appropriate...
2 Pages(500 words)Assignment

...Male-male competition due: Male-male competition Method Participants            One hundred and twelve men participated in this study, but thirteen of them dropped out from the analysis, therefore, only ninety-nine men completed it. They were from different ethnic groups; nearly half, about 49.5% of them, are Hispanic or Latino, and 26.3% are white or Caucasian. The rest of them were from Asian or Pacific Islands, Black or African American, and other ethnic groups, representing 8% each. The least age is 18, and maximum age is 32 years, and the mean age of participants was 23.02 years (SD=3.23). Materials Participants first filled in some basic information: details of...
1 Pages(250 words)Essay

...knew how to clean wounds and prevent infection. Part 3 I agree with you; Sumerians indeed contributed a feature that at the time was hard to achieve without the use of ropes and knots. The keenness required to make this happen was hard to achieve and divide the time equally. The time that they divided is the same one we use currently. Another contribution that the Sumerians` aided in the future is in the field of mathematics. The government was centralized and monarchical, and their leader was considered divine and the rest of the government officials were religious too. The art of the Sumerians and other forms of written history are mostly done in clay tablets3. Their creation...
2 Pages(500 words)Essay
sponsored ads
Save Your Time for More Important Things
Let us write or edit the essay on your topic "Response for Was Sumerian Civilization Exclusively Male Dominated" with a personal 20% discount.
GRAB THE BEST PAPER

Let us find you another Essay on topic Response for Was Sumerian Civilization Exclusively Male Dominated for FREE!