Comments (0)
Add to wishlistDelete from wishlist
Cite this document
Summary
This is based on arguments that are founded on the events that unfolded from the time Athens chose to defend Corcyra against Corinth in 433 BCE.
Athenian imperialism was a fact by the…
Download full paperFile format: .doc, available for editing
HIDE THIS PAPERGRAB THE BEST PAPER94.9% of users find it useful 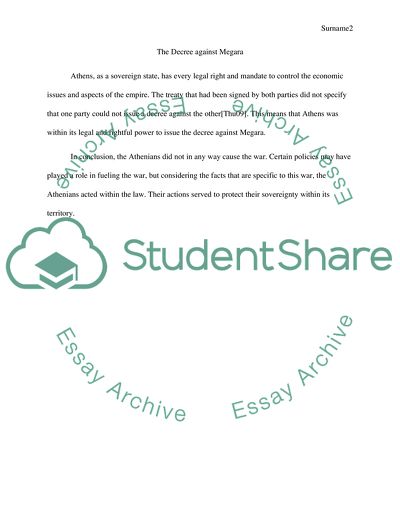 The Peloponnesian War Athens has long been accused by some history studies to have caused The Peloponnesian War. This is based on arguments that are founded on the events that unfolded from the time Athens chose to defend Corcyra against Corinth in 433 BCE.
Defense of Corcyra against Corinth in 433 BCE
Athenian imperialism was a fact by the middle of the century. This imperialism was not forced on Peloponnese but it was chosen by them when they asked the Athenians to lead Greece’s combined armies. Therefore, this was by choice not force. Furthermore, by Peloponnese accepting Athenian imperialism, they had been bound to a treaty that would only be broken by a military confrontation. The Athenians were innocent of this (Kagan). As a matter of fact, the Athenians did not join in the battle at Corcyra until their defeat was imminent.
Athenian Siege of Potidaea in 432/33 BCE
The Athenian siege of Potidaea did not cause the war as this was an act of defense against the true aggressor, Corinth. Corinth had been sworn into a binding oath to respect the dominion and rule of the Athenians in Potidaea. By sending military forces to Potidaea, Corinth had broken the treaty.
The Decree against Megara
Athens, as a sovereign state, has every legal right and mandate to control the economic issues and aspects of the empire. The treaty that had been signed by both parties did not specify that one party could not issue a decree against the other (Thucydides, Hammond and Rhodes). This means that Athens was within its legal and rightful power to issue the decree against Megara.
In conclusion, the Athenians did not in any way cause the war. Certain policies may have played a role in fueling the war, but considering the facts that are specific to this war, the Athenians acted within the law. Their actions served to protect their sovereignty within its territory.
Works Cited
Kagan, Donald. The Peloponnesian War. New York: Viking, 2003. Print.
Thucydides, Martin Hammond and P J Rhodes. The Peloponnesian War. Oxford: Oxford University Press, 2009. Print.
Tritle, Lawrence A. The Peloponnesian War. Westport: Greenwood Press, 2004. Print. Read More
Share:
Tags
Cite this document
(“History Essay Example | Topics and Well Written Essays - 250 words - 70”, n.d.)
History Essay Example | Topics and Well Written Essays - 250 words - 70. Retrieved from https://studentshare.org/history/1648759-history