Comments (0)
Add to wishlistDelete from wishlist
Cite this document
Summary
This essay focuses on that many fundamentalist activities have done much damage to the world and humanity. Wars have happened because of a fundamentalist approach taken to religious issues myriad times which is why a fundamentalist person is usually considered unpleasant…
Download full paperFile format: .doc, available for editing
HIDE THIS PAPERGRAB THE BEST PAPER95.8% of users find it useful 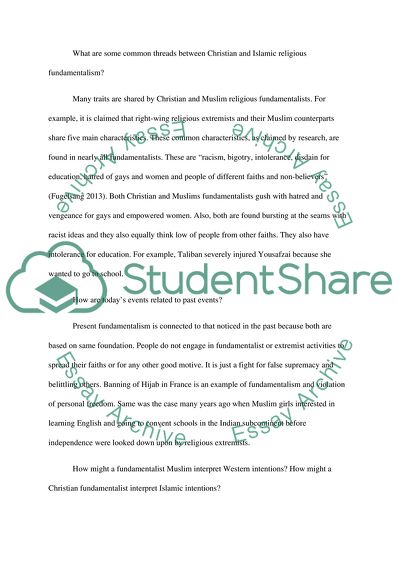 Religious Fundamentalism What is fundamentalism? The term “fundamentalism” has a certain level of controversy surrounding it. This is because many fundamentalist activities have done much damage to the world and humanity. Wars have happened because of a fundamentalist approach taken to religious issues myriad times which is why a fundamentalist person is usually considered unpleasant. Fundamentalists refuse to allow the idea of freedom or flexibility. They believe that individual freedom should be sacrificed in the name of strict adherence to orthodox religious doctrines which may or may not be applicable in present times. For example, Malala Yousafzai, a Pakistani girl shot by religious fundamentalists called Taliban, is a victim of fundamentalism because she was shot for not complying with religious terrorists or their orthodox views.
How do Christians and Muslims differ in their interpretation of historical events?
Christians and Muslims widely differ in their interpretation of historical events. For example, Crusades was a religious war and fundamentalism formed its bedrock. Both Muslims and Christians interpret this huge historical event differently. For example, Muslims interpret this event as a series of military campaigns run by Christians to stop the expansion of Islam and restrain the growing power of Muslim rulers. Many Christians were becoming impressed by Muslim civilization which was not tolerated by Christian fundamentalists and they started this war. Christians, in contrast, believe that expansion of Islam was not an issue, but Pope Urban II announced the first crusade to help Christians restore their access to the holy places in Jerusalem.
What are some common threads between Christian and Islamic religious fundamentalism?
Many traits are shared by Christian and Muslim religious fundamentalists. For example, it is claimed that right-wing religious extremists and their Muslim counterparts share five main characteristics. These common characteristics, as claimed by research, are found in nearly all fundamentalists. These are “racism, bigotry, intolerance, disdain for education, hatred of gays and women and people of different faiths and non-believers” (Fugelsang 2013). Both Christian and Muslims fundamentalists gush with hatred and vengeance for gays and empowered women. Also, both are found bursting at the seams with racist ideas and they also equally think low of people from other faiths. They also have intolerance for education. For example, Taliban severely injured Yousafzai because she wanted to go to school.
How are today’s events related to past events?
Present fundamentalism is connected to that noticed in the past because both are based on same foundation. People do not engage in fundamentalist or extremist activities to spread their faiths or for any other good motive. It is just a fight for false supremacy and belittling others. Banning of Hijab in France is an example of fundamentalism and violation of personal freedom. Same was the case many years ago when Muslim girls interested in learning English and going to convent schools in the Indian subcontinent before independence were looked down upon by religious extremists.
How might a fundamentalist Muslim interpret Western intentions? How might a Christian fundamentalist interpret Islamic intentions?
A fundamentalist Muslim calls for strict implementation of sharia law. He/she also rejects the West and everything that the West has to offer to the East (Schanzer 2002). All western values, like those which are portrayed in the movies, are severely detested. Even if Western intentions are positive, many Muslims still see it as a conniving way to invade Muslim countries. On the other hand, a Christian fundamentalist detests all Muslims and believes that every Muslim is a terrorist or somehow related to Al-Qaeda. Islamic intentions are equated to rebellion against Christian institutions. Such misguided interpretations based on fundamentalism drag the two religions and their followers further and further away.
References
Fugelsang, John. “Fugelsang: 5 Nasty Traits Shared By Christian And Muslim Fundamentalists.” aattp.org. Accessed 2013. http://aattp.org/fugelsang-5-nasty-traits-shared-by-christian-and-muslim-fundamentalists/
Schanzer, Jonathan. “At War With Whom? A short history of radical Islam.” meforum.org. Accessed 2002. http://www.meforum.org/168/at-war-with-whom Read More
Share:
Tags
Cite this document
(“Religious Fundamentalism Essay Example | Topics and Well Written Essays - 500 words - 1”, n.d.)
Retrieved from https://studentshare.org/history/1646124-religious-fundamentalism

CHECK THESE SAMPLES OF Religious Fundamentalism

...? Darwinian Fundamentalism Introduction The scientific world christened 2009 as the “year of Darwin” to celebrate the 200th birth anniversary of Charles Darwin and the 150th year of the publication of his book, On the Origin of Species. This century and a half also represents the excruciating period of conflict between the scientific and the religious communities over a large number of issues. In fact, the very title of Darwin’s book was considered to be extremely controversial and was kept conspicuous from public scrutiny. On the Origin of Species by Natural Selection, or the Preservation of Favoured Races in the Struggle for Life, clearly has an express racial connotation. However, this was not the crux...
10 Pages(2500 words)Term Paper

...s School Religious Fundamentalism Religious Fundamentalism is the term which was first used for the Protestant Community dominant in the United State in the 20th century. As the name suggests, the values and belief system of the people belonging to this community are fundamental and resistant to the modern idea as far as religion is concerned. Religious Fundamentalism studied today by social scientist is more of a contextual worldview which reflects modernity and change, thus studying religious beliefs being stagnant and adamant to the globalization and changing values (Marchovitz 2010). Though social...
3 Pages(750 words)Essay

...citizens are getting poorer, this will create a condition where there are so many people to come and face the government in the street and through other channels without being afraid of anything. If they do not have a happy family to go home to, do not have a job to protect and do not have property to protect, they will not be afraid of the government. Question 2: Violence lacking cohesive structure and religious fundamentalism While, at the current time, urban terrorists may lack cohesive structures, this cannot be seen as a weakness on their part. This is because it could be a prelude to a more powerful and integrated terrorist machine. This is because while these terrorists may lack a cohesive...
4 Pages(1000 words)Assignment

To what extent is religious fundamentalism an anti-modern ideology

...of dogma or religious beliefs that they uphold. Rather than stating that present truth can impact upon the means by which any level of understanding can be affected, orthodox ideology that hearkens back to a prior era is invariably utilized as a means of providing the ethos for the fundamentalist argument. However perhaps the most powerful reason that will be discussed within this brief analysis with regards to why fundamentalism, in all of its stripes, is an inherently a response to modernism (McLellan, 1995). Scholars might argue that merely due to the fact that fundamentalism is a response to modernism and its pressures does not make it anti-modern; however, when one considers the...
6 Pages(1500 words)Coursework

...is the belief in absolute religious authority and the demand that this religious authority be legally enforced. Religious Fundamentalism exists in Christians, Jewish, Muslims, Hindus, etc. This way of making the people to follow a religion is creating more problems. The Jews were never allowed to use things that were offered to other religious gods and it's a big sin and severely punishable if any does use. In Muslim dominated countries the existence of fundamentalism and extremism could be easily seen. Most of the Islamic nations follow Shariat law and in any way a person breaks this law is strictly...
3 Pages(750 words)Essay

...My Son the Fanatic - Hanif Kureishi An immigrant, like thousands others, Parvez, the Pakistani taxi driver, arrives in London for a better life. Set in East London, Hanif Kureishi's, My Son the Fanatic, is a short story that deals with religious and social conflicts between two distinctly different cultures and countries and brings about the rift in a father-son relation, each of whom represents the opposing forces. Islamic fundamentalism, piggy backs on the existing racism, in Britain, and become successful in luring South Asian Muslims into a world of hatred and violence, in the name of religion. It presents 'jihad' or holy war, as the option available to devout Muslims, to wipe out the infidels and secure a place in 'paradise... is the...
3 Pages(750 words)Book Report/Review

...Religious Conflict Fundamentalism Hitlers anti-Semitism idea Introduction: The Office for Democratic s and Human Rights working definition on anti-Semitism reads as “a perception of Jews, which may be expressed as hatred towards Jews” (Working Definition on AntiSemitism). Hatred directed towards Jews is not a recent development and the roots of classical anti-Semitism were founded in Christianity, with the belief that Jews were responsible for the crucifixion of Jesus Christ (Working Definition on Anti-Semitism). In spite of the long history of anti-Semitism, at no time in its history were the Jews to experience such terrible consequences that at the time of Adolph Hitler’s rule of Germany. There was...
6 Pages(1500 words)Essay

... Reflection Paper: Market over Government Caplan supports his argument, ‘while religious fundamentalism is possible, even expected and accepted, market fundamentalism is not: no one, he argues, is a true market fundamentalist’, with several premises which will be highlighted in this paper. These premises are particularly important because they will logically lead the reader to the conclusion on preferences of market over government, as is Caplan’s inclination. He observes that there is no one true fundamentalist mainly because of the human nature of being egocentric. People, such as the politicians who are delegated in a democratic system, are motivated mainly by self-interest. Therefore the notion that the politicians can allow... are...
2 Pages(500 words)Article

Critically discuss whether religious fundamentalism and violence are always entertwined

...ARE RELIGIOUS FUNDAMENTALISM AND VIOLENCE ALWAYS INTERTWINED? by The of the The of the School (University) The City and State where it is located The Date Are religious fundamentalism and violence always intertwined? Introduction If one takes a close look at the role that religion has played in the history of the development of the human civilization, one cannot help noticing that has shaped not only spiritual values, but also the very fabric of the social environment. Indeed, as the humanity evolved old religions gave their places to the new ones which often put emphasis on issues that were more significant to the contemporary society. Nevertheless, nowadays the world...
12 Pages(3000 words)Essay
sponsored ads
Save Your Time for More Important Things
Let us write or edit the essay on your topic "Religious Fundamentalism" with a personal 20% discount.
GRAB THE BEST PAPER

Let us find you another Essay on topic Religious Fundamentalism for FREE!