Comments (0)
Add to wishlistDelete from wishlist
Cite this document
Summary
Characteristics of a civilization include arts, political organization, Technological and educational advancement, writing and religion. Music in the area of arts is…
Download full paperFile format: .doc, available for editing
HIDE THIS PAPERGRAB THE BEST PAPER93% of users find it useful 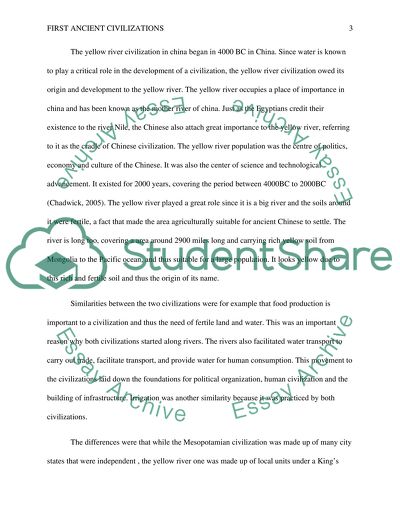 Similarities and Differences between the Early Mesopotamia and Huang He River Valley A civilization represents a group of people who live and work together and who mostly share a common culture. Characteristics of a civilization include arts, political organization, Technological and educational advancement, writing and religion. Music in the area of arts is important for entertainment and worship while political organization is important to keep things in order. Technological and educational advancement has resulted in the invention of the wheel and writing has aided in communication and record keeping. The world today is a global village due to the advance of computers and the internet. Religion is of crucial importance to society since it facilitates the guarding of morals in society.
The word Mesopotamia in the Greek language means ‘the land between two rivers’, because the civilization began between the Tigris and Euphrates rivers. It was in the Eastern Mediterranean, had the Zagros Mountains to the northeast and the Arabian Peninsula to the southeast, and corresponded to the present-day Iraq, most parts of Iran, Turkey and Syria.
It was called Al Jazira by the Arabs and has been termed to as the Fertile Crescent. This civilization is the earliest in world history and, one which lasted for the longest time having begun around 3500 BC and ended in (Chadwick, 2005). It had much influence in western civilizations and most of these civilizations laid their foundations based on its example. Unlike other civilizations, Mesopotamia was a collection of various cultures, which were only bound together by their gods, writing and how they treated women. Mesopotamia is regarded as the cradle of civilization because it was the first to build cities, use the potter’s wheel, to develop writing, to organize armies, use large quantities of bronze and is called the place where history began.
The yellow river civilization in china began in 4000 BC in China. Since water is known to play a critical role in the development of a civilization, the yellow river civilization owed its origin and development to the yellow river. The yellow river occupies a place of importance in china and has been known as the mother river of china. Just as the Egyptians credit their existence to the river Nile, the Chinese also attach great importance to the yellow river, referring to it as the cradle of Chinese civilization. The yellow river population was the centre of politics, economy and culture of the Chinese. It was also the center of science and technological advancement. It existed for 2000 years, covering the period between 4000BC to 2000BC (Chadwick, 2005). The yellow river played a great role since it is a big river and the soils around it were fertile, a fact that made the area agriculturally suitable for ancient Chinese to settle. The river is long too, covering a area around 2900 miles long and carrying rich yellow soil from Mongolia to the Pacific ocean, and thus suitable for a large population. It looks yellow due to this rich and fertile soil and thus the origin of its name.
Similarities between the two civilizations were for example that food production is important to a civilization and thus the need of fertile land and water. This was an important reason why both civilizations started along rivers. The rivers also facilitated water transport to carry out trade, facilitate transport, and provide water for human consumption. This movement to the civilizations laid down the foundations for political organization, human civilization and the building of infrastructure. Irrigation was another similarity because it was practiced by both civilizations.
The differences were that while the Mesopotamian civilization was made up of many city states that were independent , the yellow river one was made up of local units under a King’s rule and thus political control was possible. The Mesopotamian civilization was able to exert influence outside its scope in this respect unlike the yellow river one whose influence was mostly upon the Chinese society. In the area of society and economics, Mesopotamians followed the laws set by Hammurabi while the yellow river society had the family unit as the most vital social institution, with the father having full control of the family. In religion, Mesopotamia had a set of gods in each city-state and temples called Ziggurats (Chadwick, 2005). The gods were many times named after the different manifestations of nature and they were invoked to assist in good harvests and such issues. The yellow river society worshipped ancestors through oracle bones and many other ways. The dead were invoked to give advice during these types of services. The Mesopotamia civilization also lasted for a longer period.
Today’s society owes much to this civilizations which developed so much without referring to other people unlike today where the world has become a global village due to technological advance.
References
Chadwick, R. (2005). First Civilizations: Ancient Mesopotamia and Ancient Egypt. London:
Equinox Publishing Limited. Read More
Share:
Tags
Cite this document
(“First Ancient Civilizations Essay Example | Topics and Well Written Essays - 500 words”, n.d.)
First Ancient Civilizations Essay Example | Topics and Well Written Essays - 500 words. Retrieved from https://studentshare.org/history/1645958-first-ancient-civilizations

..., philosophy, and arts. The ancient civilizations of Mesopotamia, which is largely known as modern-day Iraq, Egypt, India, and China were the first to qualify as classical civilizations of the axial age. According to the majority of famous historians, a civilization is basically a process in which people belonging to a specific area shape their cultural and religious beliefs. By the same definition, the ancient Greeks qualified themselves as a unique civilization with one remarkable difference, which was the dominating priesthood that claimed a control on the sole lines of communication with the powers of mystery. In this...
15 Pages(3750 words)Essay

Civilizations of the Ancient Near East

...relegated women to mere childbearing and other inferior roles in society. In these modern times, women also carry in their grasp the same power, equality to men and exalted position as women like Golda Meir, Indira Gandhi, Margaret Thatcher, Harlem Brundtland, Gloria Arroyo and Hillary Clinton among others. But the power they hold are not absolute unlike the queens of Egypt. Queen Hatshepsut ruled ancient Egypt with absolute power Ancient Civilizations 3 for 21 years and earned for herself the title (as ascribed to her by famed Egyptologist James Henry Breasted) "the...
11 Pages(2750 words)Essay

...in human history and was dated at 3300 BC or 3 generations before the first Egyptian king Scorpion in the 1st Dynasty. Many considered this Nubian civilization to be the Ta-Seti referred to in Egyptian writings (Renseberger, New York Times). So it is evident that the River Nile produced not one but two great civilizations. Later in this paper, we will prove that both civilizations were modified and perfected by the intermingling and influencing of one with the other and vice-versa. The Egyptian Civilization The River Nile was both a boon and a bane to the ancient Egyptians. Annually, between...
6 Pages(1500 words)Essay

...World civilizations Byzantium was possibly the only stable in Europe for the period of the Middle Ages. Its great military and diplomatic power quaranteed unvoluntarily that Western Europe was safe from many of the more devastating attacks from eastern tribes, at a time when the Western Christian states had difficulties in military development. "Constantly under attack during its entire existence, the Byzantines shielded Western Europe from the Persians, Arabs, Seljuk Turks, and for a time, the Ottomans" (Wikipedia, 2005, par.17). In trade, Byzantine Empire was one of the most significant western points of the Silk Road. It was also one of the greatest commercial centers of Europe during the Middle Ages. Byzantium gathered all... the...
4 Pages(1000 words)Essay

...Why Ancient Civilizations Fall Civilization Civilization refers to the way of life of a people that has attained a high level of social organization. The basic unit of society is the family, several families grouped together make a tribe, and several tribes working for a common goal make a people or nation that share a common way of life or culture. When the culture attains a large size and an advanced character such as the way it assures peace and order, justice, defense from other people's acts of war, how the culture is transmitted, and so on, the culture is said to attain the level of civilization (Diamond 12-13). Civilizations...
5 Pages(1250 words)Essay

...Running Head: Ancient Civilizations Governance Ancient Civilizations Governance s: Course: Date: Abstract The paper has focused on the ancient progression of governments in relation to the development of various ancient governments on how the rights and duties have evolved in different regions of the world up to the Middle Ages and how they exercised their rule over their citizenry. Differences between Ancient Mesopotamia and Pharaonic Egypt Mesopotamia was the region in within the rivers Tigris and Euphrates, where the ancient Mesopotamia existed during the "Bronze Age" which was ruled by the...
4 Pages(1000 words)Essay

Describe the first ancient civilization of the Mesopotamia. Why was this region so heavily populated compared to other areas of the world What type of religion did they have Did religious teaching influence daily life Did the civilizations that fol

...Client’s 23 January Mesopotamian civilization is one of the oldest civilizations; Mesopotamians were very progressive and took appropriate steps to make significant progress. They placed special emphasis on education and knew that it was an important part of life. “Formal education was practical and aimed to train scribes and priests. It was extended from basic reading, writing, and religion to higher learning in law, medicine, and astrology.” (A Place for Civilization to Begin) The Mesopotamians were religious and believed in several deities, they also believed that water existed almost everywhere. They also believed in an air God and there were several other deities who existed for...
1 Pages(250 words)Essay

...Christians and Muslims views of the first crusade Christians and Muslims views in the first crusade The first crusade illustrated the religious favor that engulfed Christendom, the newly construed idea of holy war and the laws of an active papacy, which was misused by the Church in its providence of indulgence. The crusades were conducted as penitential acts of powerful persuasion and devotion for the atonement of all the sins committed by the people. The idea of the crusades interlinked various ideologies both those preached in the church and inherit within individuals. The crusades began when the Seljuk Turks emerged victorious in their war with the Byzantine army and prevented...
5 Pages(1250 words)Essay
sponsored ads
Save Your Time for More Important Things
Let us write or edit the essay on your topic "First Ancient Civilizations" with a personal 20% discount.
GRAB THE BEST PAPER

Let us find you another Essay on topic First Ancient Civilizations for FREE!