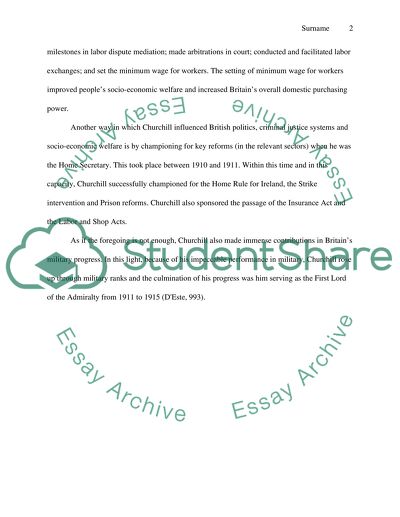 Insert Introduction Simply known as Sir Winston Leonard Spencer-Churchill (30 November 1874- 24 January 1965), Sir Winton Churchill was a British statesman, politician, Prime Minister, military officer, historian, writer and artist. For him being a man of several hats and other numerous reasons, admiration can be drawn can be drawn from Churchill, as shall be seen in the ensuing discourse.
According to Younger, one of the reasons behind the personal and general designation of Churchill as one of the most influential leaders of the 20th century world is his astuteness in politics and prolific contribution to politics. Churchill served as a Member of the British Parliament between 1900 and 1905, before proceeding to serve as the Colonial Under-Secretary between 1905 and 1908. As the Colonial Under-Secretary, Churchill was the midwife the Transvaal Constitution. This was a watershed in British politics since it determined race relations among Britons and served as the genesis of recognition of the rights of blacks in Britain to participate in politics (Younger, 134, 135).
In a separate wavelength, it is important to appreciate the contributions that Churchill made during his tenure as the President of the Board of Trade, during the time between 1908 and 1910. This was the time he was out of Parliament: from 24 April 1908 to May 1909, Churchill was out of Parliament. As the President of the Board of Trade, Churchill successfully made milestones in labor dispute mediation; made arbitrations in court; conducted and facilitated labor exchanges; and set the minimum wage for workers. The setting of minimum wage for workers improved people’s socio-economic welfare and increased Britain’s overall domestic purchasing power.
Another way in which Churchill influenced British politics, criminal justice systems and socio-economic welfare is by championing for key reforms (in the relevant sectors) when he was the Home Secretary. This took place between 1910 and 1911. Within this time and in this capacity, Churchill successfully championed for the Home Rule for Ireland, the Strike intervention and Prison reforms. Churchill also sponsored the passage of the Insurance Act and the Labor and Shop Acts.
As if the foregoing is not enough, Churchill also made immense contributions in Britain’s military progress. In this light, because of his impeccable performance in military, Churchill rose up through military ranks and the culmination of his progress was him serving as the First Lord of the Admiralty from 1911 to 1915 (DEste, 993).
Works Cited
DEste, Carlo. “Winston Churchill.” The Journal of Military History, 68.3 (2004): 993. Print
Wakely, Elizabeth and Jerome, Carson. “Historical recovery heroes - Winston Churchill.” Mental Health and Social Inclusion, 14.4 (2010): 36 – 39. Print
Younger, Kenneth. “Winston Churchill.” International Affairs (Royal Institute of International Affairs 1944- ), 51.1 (1975): 134 – 135. Print Read More
Share:
Tags
Cite this document
(“Winston Churchill Essay Example | Topics and Well Written Essays - 500 words”, n.d.)
Retrieved de https://studentshare.org/history/1644176-winston-churchill

CHECK THESE SAMPLES OF Winston Churchill

...?Introduction Winston Churchill was one of the most influential people of the 20th century, perhaps even the most influential. His energy, his will and dedication contributed, to a considerable degree, to the fact that European democracies managed to resist and finally defeat the brutal aggression of National Socialists and Fascists in World War II. Not least because of Churchill’s fighting spirit European countries remained free and open societies, which have taken the steps toward unity later on. Throughout his life - in mature years, occupying major posts, and early in life - when he was a schoolboy or soldier, Winston Churchill left no one...
4 Pages(1000 words)Essay

...Young Winston (1972) Young Winston is a British film from 1972. It is about the early life of the British Prime Minister, Winston Churchill. In fact, the film has been based on My Early Life: A Roving Commission, a book by the Prime Minister himself (Foreman). Young Winston starts with Churchill’s schooldays. Those days are not ideal for the boy and he is not happy. The film unfolds a number of events and eventually the death of his father. Here ends the first part of the film. In the second part Churchill is a cavalry office in India and Sudan. During his service period he participates in the cavalry charge at Omdurman....
4 Pages(1000 words)Essay

...Winston Churchill A Biographical Paper Winston Leonard Spencer Churchill is one of the most prominentcharacters in the English region through his time and the course of the history. He has been known to have contributed to both literature and politics, thus, his works can be considered of importance. In addition his thoughts and writings can be considered as an authority in the fields that he excelled in. At a glance Winston Churchill is a noted statesman, a known orator and strategist, a leader in different disciplines such as the British Army and a gifted writer of historical literature (Lambakis 1993; Mauter 1998). The main purpose of the study undertaken is to be able to present the events in the life of Winston Churchill... . This...
8 Pages(2000 words)Essay

...Lincoln and Churchill: A Critical Comparison of Leaders Lincoln and Churchill were both men of great vision and their respective frames of referencehelped to shape these visions in a few different ways in particular. Although there are definitely similarities present when doing a comparison of these two leaders, there are also some significant differences as well, and all of these have to be properly taken into consideration in order to be able to come to any sort of a proper understanding on the subject. It was their key principles of strategic leadership in particular that differed, namely in regards to grand strategy, cultural change and communication. While Lincoln and Churchill both...
2 Pages(500 words)Essay

...200194 To what extent was the involvement of Winston Churchill during the invasion of Gallipoli ultimately responsible for its failure? The starting point for this discussion is the First World War, or in early 1915 to be more precise. Whilst the trenches were being dug in Europe, Winston Churchill had an idea: attack the weakest opponent, the Ottoman Empire, in order to separate it from Germany and to establish a link with the Russian allies. As First Lord of Admiralty, Churchill argued that the Royal Navy had enough power to successfully execute the plan whilst retaining the ability to destroy the German Navy and maintain its blockade. Indeed as the...
12 Pages(3000 words)Essay

Was Winston Churchill the greatest leader in the 20th century

...Winston Churchill One the Greatest Leader’s of the 20th century Introduction The 20th Century was a witness to some of the greatest leaders of the world. The leaders of this golden era enriched the world with their great skills of leadership and administration. One of the greatest leaders who belonged to this era was Winston Leonard Spencer Churchill, (1874 – 1965) who was one of the most eminent British politician’s of his time, who had dedicated his entire life time towards his country. His uniqueness makes him standout as one of the most efficient administrators and statesmen even today. This research paper seeks to make an investigation about the fact that...
6 Pages(1500 words)Essay

Assess and Evaluate Winston Churchill as a Foreign Policy Leader

...Assess and evaluate Winton Churchill as a foreign policy leader Winston Spencer Churchill was a senior British parliamentarian of his time. He has served twice as the Premier of United Kingdom and has received immense recognition from all over the world for his war time policies and foreign dealings (Kennedy, PM, 1987). Churchill maintained a healthy foreign relationship with the United States. His bonding with President Roosevelt assured the British army of a continuous supply of food, arms and ammunitions during the wartime (Brasch, 2009). Premier Churchill and President Roosevelt are said to have attended almost a dozen conferences together which goes...
3 Pages(750 words)Term Paper

...﻿ “Speak Like Churchill, Stand Like Lincoln”, James Humes said. Winston Churchill is considered to be one of the greatest public speakers of the epoch. Churchill believed that there is no more valuable human talent than the talent of rhetoric and noted that public speaking skills are not the gift of the nature but they can be developed (Churchill 1987). Winston Churchill made a long and difficult path until he became a great speaker. “He did not have a melodious, engaging, supple voice, with great dexterity in emphasis, rate and volume. Instead, his vocal delivery was actually poor, deprived of the conversational quality...
2 Pages(500 words)Essay

8 Pages(2000 words)Essay
sponsored ads
Save Your Time for More Important Things
Let us write or edit the essay on your topic "Winston Churchill" with a personal 20% discount.
GRAB THE BEST PAPER

Let us find you another Essay on topic Winston Churchill for FREE!