Comments (0)
Add to wishlistDelete from wishlist
Cite this document
Summary
There were a series of events post world war that had a huge impact on the world, amongst them the most famous ones include the US reconstruction…
Download full paperFile format: .doc, available for editing
HIDE THIS PAPERGRAB THE BEST PAPER94.4% of users find it useful 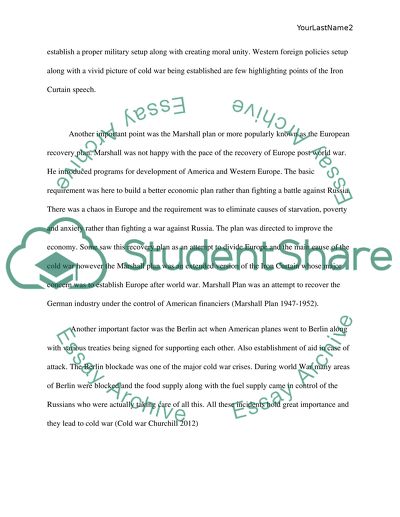 Second World War ended with lives of people changing all over the word, whether it was economically, politically or even socially. There were a series of events post world war that had a huge impact on the world, amongst them the most famous ones include the US reconstruction plan which was based on the economic aid which was provided for Europe reconstruction. It was known as Marshall Plan or European Recovery Program. Another important event was the Iron Curtain which was established by Winston Churchill and was basically a think ideological, political and military barrier to communication; it was established between the democratic countries like Western Europe and communist countries like Soviet Union. There was also an agreement signed for free access to Berlin (Berlin 1948-1949).
Winston Churchill delivered his Iron Curtain speech which gave birth to cold war. The Iron Curtain speech was about the victory of America and the power they hold; he wanted peace and co operation with the United Nations. He wanted to establish a good relationship between Americans and Britain by calling them English speaking cousins. There will be a mutual security agreement and they will work together for establishing peace (Iron Curtain 1945-1947). He was in favor of America and totally against Russia which was a very strong starting point of the cold war which lasted for years. He threatened that the Western and Eastern Europe will get separated and this was the Iron Curtain which will be established. He wanted a defense pact and wanted to establish a proper military setup along with creating moral unity. Western foreign policies setup along with a vivid picture of cold war being established are few highlighting points of the Iron Curtain speech.
Another important point was the Marshall plan or more popularly known as the European recovery plan. Marshall was not happy with the pace of the recovery of Europe post world war. He introduced programs for development of America and Western Europe. The basic requirement was here to build a better economic plan rather than fighting a battle against Russia. There was a chaos in Europe and the requirement was to eliminate causes of starvation, poverty and anxiety rather than fighting a war against Russia. The plan was directed to improve the economy. Some saw this recovery plan as an attempt to divide Europe and the main cause of the cold war however the Marshall plan was an extended version of the Iron Curtain whose major concern was to establish Europe after world war. Marshall Plan was an attempt to recover the German industry under the control of American financiers (Marshall Plan 1947-1952).
Another important factor was the Berlin act when American planes went to Berlin along with various treaties being signed for supporting each other. Also establishment of aid in case of attack. The Berlin blockade was one of the major cold war crises. During world War many areas of Berlin were blocked and the food supply along with the fuel supply came in control of the Russians who were actually taking care of all this. All these incidents hold great importance and they lead to cold war (Cold war Churchill 2012)

CHECK THESE SAMPLES OF Iron Curtain, Marshall Plan and Berlin

...?Thurgood Marshall INTRODUCTION Thurgood Marshall was the first African American Justice in the US Supreme Court. Till he is respected nationwide for his numerous contributions to the civil rights movement of the US. He was born on 2nd of July in the year 1908 in Baltimore, Maryland. Thurgood was named Thoroughgood Marshall by his parents after his great-grandfather who was a former slave in the Civil War for Union Army (United States Postal Service, “Thurgood Marshall”). He changed his name later to Thurgood. His father, William Canfield Marshall was a railroad porter and a chief steward in a club of white people of America. Thurgood’s mother, Norma Arica Marshall was a schoolteacher and also the first black woman to graduate... from the...
7 Pages(1750 words)Research Paper

...Marshall& Gordon Executive summary The Marshall& Gordon is an international company that is among the worlds best recognized for its efforts in the public relations sector with its headquarters in New York. Public Relations firms across the world provide a wide range of services that are aimed at improving and managing the reputation of a company’s brands, products, goods and services. However, public relations firm are currently facing lots of challenges as they carry on their work. Public relations consultants’ jobs were previously underestimated to be that of creating and issuing of press releases, whereby the PRs had the task of looking for connections with media personalities so that their articles...
4 Pages(1000 words)Assignment

Was the Marshall Plan an unqualified success

...Introduction The phenomenal growth of European economy after the Second World War and the factors effectuating this growth have always remained a debatable issue. In the aftermath of the World War II, when all the European countries were struggling to emerge from the economic devastation, the United States offered financial support to the Europe under a plan, called the Marshall plan. This provision of aid on the part of the United States, the Marshall plan, is regarded as the successful factor in driving the post-war West European economic growth. This paper evaluates the significance of Marshall plan in bringing about...
6 Pages(1500 words)Essay

The Truman Doctrine and the Marshall Plan

...The Truman Doctrine and the Marshall Plan As a result of the devastation wrought by the Second World War, Europe was in ruins, with its economic production at a standstill and its people suffering from hunger. Politically, the Eastern countries were increasingly going under the influence of the Soviet Union, while communist parties in France and Italy were growing in strength - spurring the United States into swift, concerted action. On March 12, 1947, President Harry Truman addressed Congress to ask for funds that would aid Greece and Turkey so that they could repeal the communist threat. Truman said "it must be the policy of the United States to support free peoples who are resisting attempted subjugation by armed minorities... or by...
4 Pages(1000 words)Essay

Truman Doctrine or the Marshall Plan

...After six years of intensive warfare and destructive battles, most of which were concentrated on the European continent, World War II came to an end. The end of the war, however, did not herald an age of peace and harmonious co-existence but instead, witnessed the outbreak of one of the world's most intense and protracted conflicts: the Cold War. Essentially ideological in nature, the Cold War was a bitter conflict between Communism and Democracy, between the Soviet and the U.S. camps. Former wartime allies had become tenacious enemies and it is impossible to ignore the role which either the Truman Doctrine or the Marshall Plan played in this development. The Truman Doctrine came into being in 1947. ...
2 Pages(500 words)Essay

...implications. Body When the Second World War ended in Europe, in accordance with the Potsdam Agreement, the Allies divided what was left of pre-WWII Germany into four zones with each zone to be controlled by four Allied countries, namely, the United States, the United Kingdom, France, and the Soviet Union (Hertle, 2007). Berlin was also divided into four parts with each portion also controlled by the four states (Hertle, 2007). Soon thereafter, the political divides drifted into greater gaps between the Soviets and the other states. One of the main issues seen at this point was the fact that USSR refused to cooperate with the reconstruction plans for Germany (Hertle, 2007). They refused to follow...
14 Pages(3500 words)Research Paper

...Berlin Neue Sachlichkeit" ie (New Objectivity) "Neue Sachlichkeit" is defined as a “movement in the fine arts,music, and literature, which developed in Germany during the 1920s and was characterized by realism and a deliberate rejection of romantic attitudes” (Neue Sachlichkeit). 2) Walter Gropius Walter Gropious was noted as an American-German architect who was born in the year 1883 and identified to be one of the leaders of modern functional architecture (infoplease). His architectural works and designs make him famous and driven out by the Nazis from Germany, he emigrated to American in 1937 where he continued to exhibit his prowess in his respective field of endeavor. His joining Harvard school of architecture...
1 Pages(250 words)Assignment

...Paper on the Marshall Plan. The Marshall plan which was officially known as the European Recovery Program(ERP)was an initiative developed by America at the end of WWII whose aim was to help the European economies to recover hence overcoming the soviet communism which threatened to take over(DeCONDE, 2002, p95) The allied powers had bombed and leveled whole cities and the Germans had efficiently destroyed all cities which they had previously occupied, an American diplomat described it as “ the odor of death was everywhere,” there was no shelter available to the large masses of survivors of war and farmlands and crops despoiled with massive livestock deaths and...
6 Pages(1500 words)Research Paper

The Clash of the Titans. Soviet-American rivalry

...from the Allied Council and blockaded the city of Berlin, which cut all the supplies to West Berlin Grant 8. The tension of this situation can be best described by Winston Churchill, the leader of the Great Britain describes this division in his famous speech where he states, “…An iron curtain has descended across the continent…Behind that line... all are subject…I do not believe that Soviet Russia desires war. What they desire is the fruits of war and the indefinite expansion of their power and doctrines.” Grant 6. The “Berlin blockade” was a blessing in disguise for the United States, who quickly reacted by conducting airlift operations. The...
4 Pages(1000 words)Essay

Final paper about the Marshall Plan

...RESEARCH PAPER, HISTORY FINAL PAPER ABOUT THE MARSHALL PLAN By: Introduction It is important to highlight that this is a research paper that delves in the discussion of The Marshall Plan (European Recovery Program). This was an initiative that was meant for the changing of the image of the European continent economically, politically and socially. This was a program for making the continent grow after the aftermath of the Second World War. Maintaining good international relations and boosting the intercalations among the countries (Greg 2007, pg 14). The origin of Marshall Plan Background Marshall Plan...
6 Pages(1500 words)Research Paper
sponsored ads
Save Your Time for More Important Things
Let us write or edit the essay on your topic "Iron Curtain, Marshall Plan and Berlin" with a personal 20% discount.
GRAB THE BEST PAPER

Let us find you another Essay on topic Iron Curtain, Marshall Plan and Berlin for FREE!