Comments (0)
Add to wishlistDelete from wishlist
Cite this document
Summary
Small time diplomatic personnel played a significant role in establishing the peacemaking treaty between Egypt and Israel, for instance the Jordanian diplomats (Vanetik 68). The diplomats emphasized on the importance of each nation to respect the territorial integrity of one…
Download full paperFile format: .doc, available for editing
HIDE THIS PAPERGRAB THE BEST PAPER92.2% of users find it useful 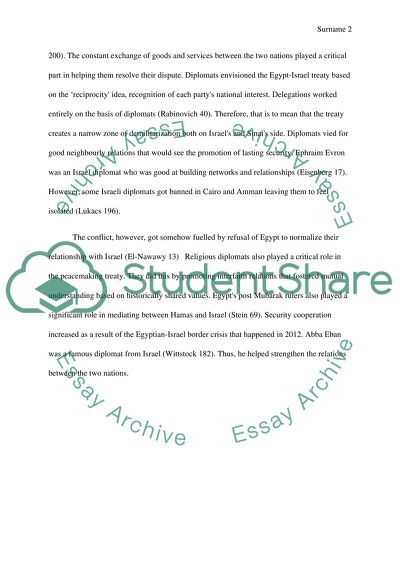 Role of Diplomats in the Egypt-Israeli peacemaking treaty (1970s) Small time diplomatic personnel played a significant role in establishing the peacemaking treaty between Egypt and Israel, for instance the Jordanian diplomats (Vanetik 68). The diplomats emphasized on the importance of each nation to respect the territorial integrity of one another. The two countries established diplomatic relations and Begin and Sadat received the Nobel peace prize for their efforts (Corrigan 43). Respect is a very significant factor when it comes to peacemaking. Partnership is the other thought that diplomats emphasized, which would help in this peace treaty. The idea of partnership in the Egypt-Israel treaty replaces the emphasis on respect. U.S diplomats also played a crucial role in this treaty (Eisenberg 83). The role small time diplomats played was so effective that they did not need international peacekeepers to help them resolve their problems.
Diplomats facilitated cooperation between the two parties such as trade cooperation. The Middle- east, during this period, saw all forms of diplomatic activity (Gat 177). More often than not they even advised the King or president on the formulation of foreign policies, but they would get ignored (Goldschmidt 160). Other than this, there has been a stable import-export cooperation of a limited list of commodities facilitated by diplomats. Egyptian diplomats also facilitated the speed on the agreement terms by giving a due date of agreement, failure to which would lead them to look for other alternatives. (Bar-Siman-Tov 200). The constant exchange of goods and services between the two nations played a critical part in helping them resolve their dispute. Diplomats envisioned the Egypt-Israel treaty based on the ‘reciprocity idea, recognition of each partys national interest. Delegations worked entirely on the basis of diplomats (Rabinovich 40). Therefore, that is to mean that the treaty creates a narrow zone of demilitarization both on Israels and Sinais side. Diplomats vied for good neighbourly relations that would see the promotion of lasting security. Ephraim Evron was an Israel diplomat who was good at building networks and relationships (Eisenberg 17). However, some Israeli diplomats got banned in Cairo and Amman leaving them to feel isolated (Lukacs 196).
The conflict, however, got somehow fuelled by refusal of Egypt to normalize their relationship with Israel (El-Nawawy 13) Religious diplomats also played a critical role in the peacemaking treaty. They did this by promoting interfaith relations that fostered mutual understanding based on historically shared values. Egypts post Mubarak rulers also played a significant role in mediating between Hamas and Israel (Stein 69). Security cooperation increased as a result of the Egyptian-Israel border crisis that happened in 2012. Abba Eban was a famous diplomat from Israel (Wittstock 182). Thus, he helped strengthen the relations between the two nations.
Work cited
Vanetik, Boaz, and Zaki Shalom. The Nixon Administration and the Middle East Peace Process, 1973-1979: From the Rogers Plan to the Outbreak of the Yom Kippur War. , 2013. Print.
Gat, Moshe. In Search of a Peace Settlement: Egypt and Israel between the Wars, 1973-1979.
Lukacs, Yehuda. Israel, Jordan, and the Peace Process. Syracuse, NY: Syracuse Univ. Press, 1999. Print
Corrigan, Jim. The 1970s Decade in Photos: Protest and Change. Berkeley Heights, NJ: Enslow Publishers, 2010. Print
El-Nawawy, Mohammed. The Israeli Egyptian Peace Process in the Reporting of Western Journalists. Westport, Conn. [u.a.: Ablex, 2002. Print.
Wittstock, Alfred. The World Facing Israel, Israel Facing the World: Images and Politics. Berlin: Frank & Timme, 2011. Print.
Rabinovich, Itamar. The Brink of Peace: The Israeli-Syrian Negotiations. Princeton, N.J: Princeton University Press, 1999. Internet resource.
Goldschmidt, Jr A. Historical Dictionary of Egypt. Lanham: Scarecrow Press, 2013. Internet resource.
Eisenberg, Laura Z, and Neil Caplan. Review Essays in Israel Studies. Albany: State University of New York, 2000. Print.
Bar-Siman-Tov, Yaacov. Israel and the Peace Process, 1973-1980: In Search of Legitimacy for Peace. Albany: State University of New York Press, 1994. Internet resource.
Eisenberg, Laura Z, and Neil Caplan. Negotiating Arab-Israeli Peace: Patterns, Problems, Possibilities. Bloomington: Indiana University Press, 2010. Internet resource.
Stein, Kenneth W. Heroic diplomacy: Sadat, Kissinger, Carter, Begin and the quest for Arab-Israeli peace. New York: Routledge, 1999. Print. Read More
Share:
Tags
Cite this document
(“Assess the role of small time Diplomats in the Egypt-Israeli peace Essay”, n.d.)
Assess the role of small time Diplomats in the Egypt-Israeli peace Essay. Retrieved from https://studentshare.org/history/1641748-assess-the-role-of-small-time-diplomats-in-the-egypt-israeli-peace-making-1970s

“Assess the Role of Small Time Diplomats in the Egypt-Israeli Peace Essay”, n.d. https://studentshare.org/history/1641748-assess-the-role-of-small-time-diplomats-in-the-egypt-israeli-peace-making-1970s.
Comments (0)
Click to create a comment or rate a document

...to the political, diplomatic and scholastic leaders, hardly ever filtering down to the common public. Most Israelis were cynical of the peace process and required to be encouraged that it was likely to make an agreement with the people who, until yesterday, loathed them and rejected even to be aware of their existential legitimacy. Few resources were spent in "peace education" or the formation of a language of peace that would have been consequential to big sectors of both. The Israeli "Voice of Peace" radio station actually closed shortly after Oslo Agreement. The truth remains behind the bars and...
7 Pages(1750 words)Essay

...) With the weakening and demise of Arafat and the surge in violence between Palestinians and Israelis, the Bush administration adopted a more active role. In April 2003, the Roadmap was launched at the Sharm al-Sheikh summit, attended by President Bush and the Israeli and Palestinian prime ministers, Ariel Sharon and Mahmoud Abbas. The parties agreed to negotiate and undertake phased, time-bound actions to be implemented in parallel by both sides in order to progress to a stated and mutually agreed two-state solution by the projected date of 2005. (Indyk, p. 80) With the failure of the Roadmap, the Bush administration sought to re-activate the peace...
5 Pages(1250 words)Essay

...Water and the Arab- Israeli Peace Process Middle East is known for a long time for conflict. The conflict due to territorial occupation and water usage has been rampant (Asser 1). Water has been a lasting problem due to a dry state of the region. A reflection on water helps in understanding Arab-Israel peace process. Water has been a source of conflict in the region. There have been wars in the region due to issues of water. One of such wars was the Six-Day war in 1967 (Asser 1). The war arose due to Arab countries intention of diverting the River Jordan. The river had been the main source of drinking water for Israel (Asser 1). After the war, a larger section of water...
1 Pages(250 words)Essay

Role Of Women In Ancient Egypt

...due: Role of women in ancient Egypt and information on queen Hatsheput Egypt is well known for its early civilization on earth. Egypt thrived for thousands of years with great cultural advances in every field of human knowledge, from arts to science to technology and religion. With these cultural advances, each member of the society had a role to play. This essay will focus mainly on the role of women in the ancient Egypt and the first of the female pharaohs known as Hatsheput. Hatsheput was one of the first female pharaohs in the recorded history of ancient Egypt. She lived in the 15th century B.C....
1 Pages(250 words)Essay

...embrace a diplomatic process, one side is resorting to violence in the pretext of fighting for a just cause. In such an environment, both sides have turned aggressive, and no one is willing to come to the negotiating table to make compromises as a way forward to finding a lasting solution to the Arab/Israeli conflict (Slater 178). Further, while the State of Israel wants other Arab states to recognize its legitimacy, this has not been the case as Israel continues to face denunciation by most of its neighbouring Arab states in the Middle East such as Iran and Syria. The territories claimed by Palestinians that has instigatedthe escalation of the conflict in recent times...
7 Pages(1750 words)Research Paper

...is dedicated to the cause of eliminating Israel and making Palestinians return to their old home. Currently, Israel has the power to control who goes in and gets out of Gaza. Sometimes Israel launches offensives against Gaza to retaliate after a missile has been launched in Israel. The natural energy deposits found off the coast of Gaza is all the significant source of the conflict that has pitted Israel against its Arab neighbors. In most cases, the role of natural gas deposits in the Israeli-Palestine conflict has been overlooked. It is debatable that in all most all current wars and uprisings in the Middle East there is competition for natural energy deposits. The...
6 Pages(1500 words)Research Paper

...The Oslo Process al Affiliation) The Oslo Process brought peace to the Palestine’s through signing of peace treaty centered on the UNSCR (United Nations Security Council Resolution). This process at first started as an undisclosed mediation between Israel and Palestine (Rothstein, Maoz & Shiqāqī, 2002). Signing of this peace treaty between the Israelites and Palestine brought successes to the Palestinians. The Palestinians acquired their land back that had been under the Israeli. Jericho and Gaza were given back to Palestine as the first step in building the peace treaty (Rothstein, Maoz & Shiqāqī, 2002). The Oslo process made Israeli forces withdraw from West Bank territory that contained Palestine and was made to be under... ...
1 Pages(250 words)Essay

The Impact of the growing attention between GCC and China

...and confront Iran and the Islamists with Egypt no longer being the guarantor of the alliance. Consequently, the GCC resolved to close the gates to the gulf peninsula against the Arab spring and disregarding the US opinion on the matter as well as boosting their involvement in international affairs and as such, they made the international community to depend more on their policy. Diplomatic tension was further felt in 2013 between Saudi Arabia and the US when the kingdom announced of their decision not to seat in the UN Security Council after having lobbied for a long time to do exactly that. Saudis felt that the Council was only a puppet which only serves the interests of the US and...
70 Pages(17500 words)Thesis
sponsored ads
Save Your Time for More Important Things
Let us write or edit the essay on your topic "Assess the role of small time Diplomats in the Egypt-Israeli peace making (1970s)" with a personal 20% discount.
GRAB THE BEST PAPER

Let us find you another Essay on topic Assess the role of small time Diplomats in the Egypt-Israeli peace making (1970s) for FREE!