Comments (0)
Add to wishlistDelete from wishlist
Cite this document
Summary
The value of art does not increase with time. In fact, most art fanatics treasure old paintings. The most expensive paintings were painted in between the 13th to 17th century. As such, measuring the quality of art while using an…
Download full paperFile format: .doc, available for editing
HIDE THIS PAPERGRAB THE BEST PAPER94% of users find it useful 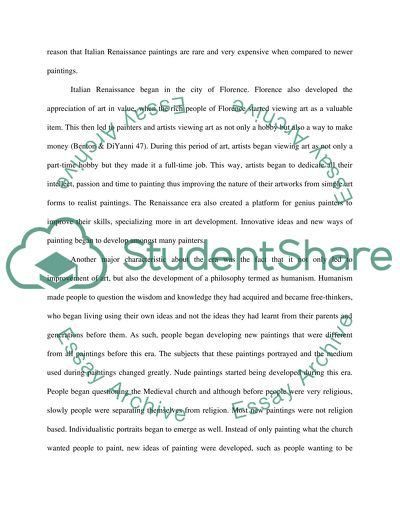 Visual Arts and Film Studies Evolution of Art Introduction Many art fans value art from several periods. The value of art does not increase with time. In fact, most art fanatics treasure old paintings. The most expensive paintings were painted in between the 13th to 17th century. As such, measuring the quality of art while using an approach that involves reviewing the date it was painted is wrong. As such, it is good to love art created in various stages of the development. Creativity, development of new ideas, new ways of painting and different subjects define the development of art at different time periods.
Chapter One: Italian Renaissance
Going back in time to the beginning of European Renaissance, some of the best paintings were developed during the Italian Renaissance. The Italian Renaissance is one of the longest periods of art. The Italian renaissance started from the 14th century to the 16th century. Italian Renaissance marks the development of art from the medieval period to early European Modern paintings. Why then are there only a few paintings existing today that were painted during this period? Well, the answer is quite simple. Since the world had not yet experienced globalization during this era, only a few paintings were spared and saved during this era. However, there were many painters in this era but only a few of them became famous. Most painters during this period, and the art periods before this did not gain fame from their art. This also explains the reason that Italian Renaissance paintings are rare and very expensive when compared to newer paintings.
Italian Renaissance began in the city of Florence. Florence also developed the appreciation of art in value, when the rich people of Florence started viewing art as a valuable item. This then led to painters and artists viewing art as not only a hobby but also a way to make money (Benton & DiYanni 47). During this period of art, artists began viewing art as not only a part-time hobby but they made it a full-time job. This way, artists began to dedicate all their intellect, passion and time to painting thus improving the nature of their artworks from simple art forms to realist paintings. The Renaissance era also created a platform for genius painters to improve their skills, specializing more in art development. Innovative ideas and new ways of painting began to develop amongst many painters.
Another major characteristic about the era was the fact that it not only led to improvement of art, but also the development of a philosophy termed as humanism. Humanism made people to question the wisdom and knowledge they had acquired and became free-thinkers, who began living using their own ideas and not the ideas they had learnt from their parents and generations before them. As such, people began developing new paintings that were different from all paintings before this era. The subjects that these paintings portrayed and the medium used during paintings changed greatly. Nude paintings started being developed during this era. People began questioning the Medieval church and although before people were very religious, slowly people were separating themselves from religion. Most new paintings were not religion based. Individualistic portraits began to emerge as well. Instead of only painting what the church wanted people to paint, new ideas of painting were developed, such as people wanting to be painted. Architecture was not only similar to churches, but new ways of building and designing houses were developed. Sculptures were now new and they did not feature church icon. Italian Renaissance is thus origin of secular painting and thinking. Some of the most famous painters such as Leonardo Da Vinci and Michelangelo were from this era.
Italian Renaissance Painting Analysis

...? FINAL MILESTONE PROJECT Final Milestone Project For the sake of my final project, chose to attend The Master Work Museum of Bermudian Art exhibition, which was holding its 25th anniversary in honoring art work inspired by Bermuda. In this exhibition, held between October 12, 2012 and January 3, 2013, many artists gathered to share their unique work as members of the Bermuda community. The central theme of the exhibition was Bermuda Inspiration – through the eyes of the artists-a fresh eye-people can see Bermuda. Various sculpture and painting works from various individual artists were presented. There are some artistic pieces that profoundly interested me including K.A.S.E 2012, a painting made of oil on linen, 83 x 56.5., done... at...
5 Pages(1250 words)Assignment

...? From the time of Reconstruction after the Civil War until the present, what progress have we made in the United s in terms of ALL three of ourcourse themes?Liberty, Equality, and Power? Furthermore, of the three themes, which one has been emphasized and influenced our society the most? YOU MUST write about ALL THREE THEMES. When we start thinking about the metamorphosis of human society, the principles of liberty, equality and power becomes intrinsically associated with our thoughts particularly in the political reformation and history of the United States. The political culture of the United States is set on the stage of the ideals that have been mentioned above and the features of American politics include a scrappy...
6 Pages(1500 words)Essay

...Peace and Security: Managing Conflict and Violence in a Turbulent World The history of the art can be defined to be any product ­­or activity made by humans in a visual method for either expressing any ideologist expression, emotion or for a communicative necessity. However, the visual art has been into different diverse forms since the medieval period, throughout the mechanical and liberal arts to the modern forms of arts including applied arts to the fine arts. Moreover, the evolution and manifestation of human creativities have demonstrated various notions in the societal importance and changed the way of living for...
3 Pages(750 words)Assignment

...and clear. The Cycladic female figure is less precise and more abstract. It is less elaborate and more symbolic. I think the museum has displayed the art properly especially the Kouros because it is placed in the center where people can appreciate its fullness and presence. The female statue has been given a less prominent position in the museum compared to the Kouros maybe due to its size and composition. I have chosen these two pieces of art because they have caught my attention and interest. Such intricate design and genius of a work is indeed something to be amazed about. Since I do not know much about the ancient civilization, seeing how they represent the human body and how precisely they have...
4 Pages(1000 words)Essay

...and southern territory flourished. This led to the built up hatred between the North and the South, for each had a specific stance when it came to the problem and practice of slavery, as well as disruptions in Congress. Compromising attempts ensued to address the issue. The Compromise of 1850, thought of by Henry Clay, succeeded. It consisted of four parts. First, California would be a free state. Second, the other Western territories would vote over slavery. Third, slave trade was stopped in Washington D.C. And finally, the Fugitive Slave Act, which declared that all runaway slaves be brought back to their masters, was enacted. Although this was a compromise, it ignited the tensions between the Northerners and...
4 Pages(1000 words)Scholarship Essay

...The Problems inside Compaq and the Merger with HP Both Compaq and HP are long time rivals in the field of computer hardware and components. However, looking at the benefits of their merger, both the companies as part of each others’ strategic management initiated the merger drive. This paper will review the merger between HP and Compaq in 2001, identifying the strategic management issues that preceded the merger on both sides, along with the changes in the management strategy resulting from the combined operations. Background of Project The ‘seeding’ of the merger was an unrelated phone call that took place between Carly Fiorina, then CEO of HP and Michael Capellas, then CEO of Compaq in late June 2001. The original...
4 Pages(1000 words)Essay

...ART HISTORY FINAL PAPER Explain the architectural and decorative program of the Great Stupa at Sanchi. How does the structure support the tenets of Buddhism? What is a Stupa and from which Hindu form is the shape and decorative elements derived? The Stupas are arranged to form hemispherical domes covering a relatively large area.it have a central chamber that served as the positioning of the relics of the Buddhists. There are four curves of the gateway that faces four directions of the railings. The Stupas have stone fencings as the railings and staircase make decorations. A path exists for circumambulation located near the main Stupa. There are motif of sculptures designed on the railings and the gates of the Stupa... HISTORY FINAL PAPER...
4 Pages(1000 words)Essay

..., there were various successful and professional women artists in the period. General discussion of the theme and its relevance to art Women for a long time have been defined by history. One of the periods that depicted the position of women in society was Baroque. The period lasted began in the last decade of 16th century and lasted up to 1750 (Schneider 1). The period was characterized by religious and political turmoil (Schneider 1). The religious and political turmoil proved helped women in the society, as there were more chances for expression through art. The period also saw the rise of new humanistic education curriculum. This made it possible for the artist to mix socially with...
10 Pages(2500 words)Research Paper

...1939, when Germany attacked Poland without declaring war. Britain and France confirmed war on Germany on third September. Other members of the Commonwealth followed the war trend though the war in Poland was short lived. The German defeated the Polish defenses, and the conquest was almost complete when Soviet forces entered Poland. The war campaign ended with the division of Poland as USSR conquered Finland in the Finnish-Russian War between 1939 and 1940. (Anonymous) QUESTION 3 Following the World War I, the defeated Germany, Italy, and Japan were keen to increase their power. The three countries finally got other dictatorship forms. This made the states to be uppermost and they also called for growth at the expense of...
10 Pages(2500 words)Essay
sponsored ads
Save Your Time for More Important Things
Let us write or edit the essay on your topic "Art History Final Project" with a personal 20% discount.
GRAB THE BEST PAPER

Let us find you another Essay on topic Art History Final Project for FREE!