Comments (0)
Add to wishlistDelete from wishlist
Cite this document
Summary
This book gives learners and researchers an understanding into British main government in 1914, along with how in addition to why the country altered in the course of the war period and what enduring changes stayed after the war. The war led to the expansion of the scope of…
Download full paperFile format: .doc, available for editing
HIDE THIS PAPERGRAB THE BEST PAPER95.8% of users find it useful 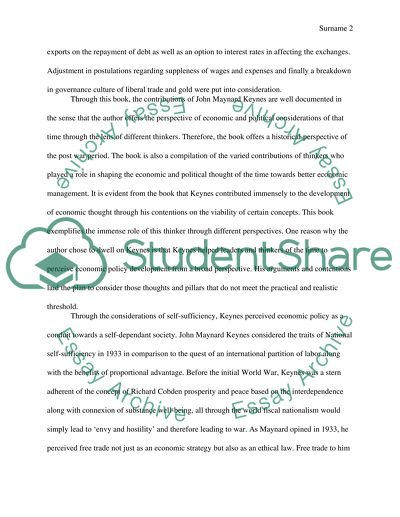 Download file to see previous pages After the initial world war, the government of Britain tried to bring back the prevailing calm before the war period. This policy involved swapping of fixed exchange rates on free trade, capital mobility and the gold standard and the involvement of the government in the forfeit of local monetary policy. However, the endeavor became more complicated during the period linking 1919 to 1931. The growing consideration of the local, political, and economic consequences limited the pursuit of the global economic policies. In the course of 1930s, a novel policy swap surfaced protectionism, capital controls along with controlled exchange rates with an increased consideration of the local monetary policy. This book evaluates the grounds for the surfacing of limitations and the ensuing removal of the previous swap with regard to established variables. Alterations in economic performance along with its effect of varied actors, the considerations of national debt in addition to limitations on interest rates, the effect of capital exports on the repayment of debt as well as an option to interest rates in affecting the exchanges. Adjustment in postulations regarding suppleness of wages and expenses and finally a breakdown in governance culture of liberal trade and gold were put into consideration.
Through this book, the contributions of John Maynard Keynes are well documented in the sense that the author offers the perspective of economic and political considerations of that time through the lens of different thinkers. Therefore, the book offers a historical perspective of the post war period. The book is also a compilation of the varied contributions of thinkers who played a role in shaping the economic and political thought of the time towards better economic management. It is evident from the book that Keynes contributed immensely to the development of economic ...Download file to see next pagesRead More
Share:
Tags
Cite this document
(“Burke, Kathleen (ed.), War and State: The Transformation of British Essay”, n.d.)
Burke, Kathleen (ed.), War and State: The Transformation of British Essay. Retrieved from https://studentshare.org/history/1640683-burke-kathleen-ed-war-and-state-the-transformation-of-british-government-1914-1919-1982

...these. Introduction This essay will deal with the British Welfare System and the inequalities it sought to remedy in such areas as education, employment opportunities, justice and health. The United Kingdom is a state in which centralised government , and the legislation it produces, directs its welfare system to a great extent. However, although one state, it is not one country. This means, especially since the setting up of separate parliaments that legislation and therefore provision and available services in Scotland, Wales and Northern Ireland as well as in England will differ to some extent. Also there is no one ‘Welfare State Ministry’. The...
20 Pages(5000 words)Essay

...﻿ The Beveridge Report in 1942 is often discussed as the main influence on the birth of the Classic Welfare State in Britain. The report sparked much debate and in the following years social policy was transformed. Within a few years the classic welfare state had been created through the Education Act, Family Allowance, National Insurance, National Assistance and the National Health Service. The general feature underpinning this was a government commitment to full employment. Before launching into a discussion about the nature of the legislation that was passed in the forties it is important to be clear about the meanings of revolutionary and evolutionary policy. ...
10 Pages(2500 words)Essay

British Entrepreneurship between 1870 and 1914

...Liberal Government (1906 - 1914) How effectively was the problem of poverty dealt Contents Introduction TheBackground Measures taken by the Liberal Government: A Welfare State Analysis of Effectiveness References Introduction The General Elections that were held in Britain in 1906 celebrated its centenary year in 2006. Although a number of historical events of historical significance exist, the General Elections of 1906 can be considered to be one of the most important happenings in British History. Even till today, the victory of the Liberal Party in 1906 elections is considered to be the most remarkable reversal of electoral trend. Along...
8 Pages(2000 words)Essay

...Pre First World War: 1914 Until 1914, a woman’s hair was her crowning glory. In the early 1900s, pads and frames of false hair were common with womenwho wanted their hair to appear full and soft. This pompadour style was achieved by supports and back combing. Back combing involved pulling all the back hair into a plait or flat coil and drawing the hair into the crown of the head. In 1902, a pompadour style called the transformation was widely used (Conway 2004). The transformation product was made of natural hair that could be waved and it transformed any hair style into one with an abundant amount of waves. This...
4 Pages(1000 words)Essay

...what to think, but gradually is led to question the futility of war by watching the reactions of the people in the railway carriage. Empty clichés and traditional justifications fall away in the face of the fat man and the mother’s final appreciation of the finality of death. Their physical and mental distress are together ample evidence that human beings were never made to suffer in this pointless way. References Biasan, Gian-Paolo. “Narratives of self and society.” In Baranski, Zygmunt G. (Ed.), The Cambridge companion to modern Italian culture. Cambridge: Cambridge University Press, 2001, pp. 151-172. Frenz, Horst (Ed.) Nobel Lectures, Literature 1901-1967. Amsterdam: Elsevier...
6 Pages(1500 words)Research Paper

...: from Impotence to Power’ argues that the war necessitated the treasury administrators to regulate government spending to reduce wastage of public funds in case of such wars. After the war, ‘anti-waste’ campaigns by the treasury gave it veto power to regulate government spending and recruitment, which was used in both World Wars. Works cited Burke, Kathleen (Ed.). War and the State: The Transformation of the British Government, 1914-1919. London: George Allen & Unwin, 1982. Print.... College: A review of War and The Transformation of British Government, 1914-1919 by Kathleen Burke (Ed...
4 Pages(1000 words)Book Report/Review

...that caused the most severe damage was that of the Black Hand of Serbia. It was this group and this underground and undeclared outfit that led to the rise in tension. The killing of the Arch Duke Franz Ferdinand became the sole reason of the outbreak of the war, and it was as a gift of the notorious activities of this group which led to it. Overall, the book has taken a look into all the aspects and it provides sufficient details of the events. The book serves as a good recipe for those who want to understand the underlying reasons that led to the war, the course of the war and following the outcome of the war, and the overall status and state of Europe...
4 Pages(1000 words)Book Report/Review

...The First World War that erupted in 1914 was an outcome of multifaceted circumstances and scenarios. It had its root causes in political, social, economic and ideological backgrounds. The road towards First World War was in making since the middle of 19th century. Military alliances, subjects’ hostility towards their masters, diplomatic failures all these resulted in the outbreak of the war. The Ottoman Empire that had long ruled over the subjects had gone frail in recent times, giving rise to a vacuum within. This led to the fight within between the Big three of Europe. The German armament and the hostile attitude of the Kaiser and the military top heads was reflective...
1 Pages(250 words)Assignment

The Great War, a Catalyst for Changing Class Structure in Britain, 1914-1919

...in the election as opposed to 1910 before the war where only men were allowed to vote. This was because of the representation of the people act of 1918, which gave the vote to all men and women over 21 and 30 respectively with ownership of property and land. Britain changed significantly between 1912 and 1918. The internal issues that affected Britain most included the role of state, women and the class structure. After the First World War, the internal changes in Britain greatly affected individuals of all statures and classes socially, economically and politically. That is, changes such as increased government intervention and control and increased rate of...
8 Pages(2000 words)Research Paper
sponsored ads
Save Your Time for More Important Things
Let us write or edit the essay on your topic "Burke, Kathleen (ed.), War and State: The Transformation of British Government, 1914 1919 (1982" with a personal 20% discount.
GRAB THE BEST PAPER