Comments (0)
Add to wishlistDelete from wishlist
Cite this document
Summary
It provides nice political lessons through its unique dramatic manner of presentation. A quick look through the movie clearly reminds the viewer about the old ways practiced back in Washington around 1860s (O’Brien Geoffrey: pp. 2)…
Download full paperFile format: .doc, available for editing
HIDE THIS PAPERGRAB THE BEST PAPER97.1% of users find it useful 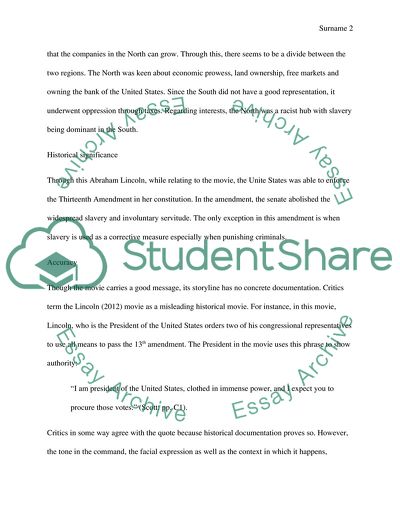 Lincoln Movie Review Introduction Lincoln movie is a historical movie. It provides nice political lessons through its unique dramatic manner of presentation. A quick look through the movie clearly reminds the viewer about the old ways practiced back in Washington around 1860s (O’Brien Geoffrey: pp. 2). This is because of the attires in use, the story line and the way characters present themselves. Slavery was widespread by then, there were a series of civil wars and political divide. Even though this happened, it was all because the fight against slavery and force labor was winning the conquest.
Historical event
The movie appreciates the most remarkable historical event in the American history. The movie displays the efforts put forward by Abraham Lincoln during his last years in power to pass the 13th Amendment in the U.S. Constitution with the help of the House of Representatives. In this sense, some social issues like the rights to vote by the African Americans and women and slavery are among the contributors to its amendment. In Lincoln (2012), a key issue revolves around social class and not race. Lincoln used the North Industrialists to fund most of his campaigns because it gave them the power to levy heavy taxes on people living in the South so that the companies in the North can grow. Through this, there seems to be a divide between the two regions. The North was keen about economic prowess, land ownership, free markets and owning the bank of the United States. Since the South did not have a good representation, it underwent oppression through taxes. Regarding interests, the North was a racist hub with slavery being dominant in the South.
Historical significance
Through this Abraham Lincoln, while relating to the movie, the Unite States was able to enforce the Thirteenth Amendment in her constitution. In the amendment, the senate abolished the widespread slavery and involuntary servitude. The only exception in this amendment is when slavery is used as a corrective measure especially when punishing criminals.
Accuracy
Though the movie carries a good message, its storyline has no concrete documentation. Critics term the Lincoln (2012) movie as a misleading historical movie. For instance, in this movie, Lincoln, who is the President of the United States orders two of his congressional representatives to use all means to pass the 13th amendment. The President in the movie uses this phrase to show authority:
“I am president of the United States, clothed in immense power, and I expect you to procure those votes.” (Scott: pp. C1).
Critics in some way agree with the quote because historical documentation proves so. However, the tone in the command, the facial expression as well as the context in which it happens, according to critics does not have evidence to proof it. History documentation depicts Abraham Lincoln as a good, confident and an admirable leader. This is a true contrast according to the movie storyline. Lincoln, in the movie appears to use some kind of dictatorship, bribery and favourism to up his political game.
Conclusion
The movie is a great masterpiece. It reflects the true-life events that America faced at one point. Even though some of the events in the movie face criticism, they are bound to happen. In 1865, the efforts to pass the slavery bill were effective. The movie shows this historical significance. Steven Spielberg has contributed by documenting such a historical milestone through the movie. However, there seem to be many issues regarding accuracy. Making people believe, it needs to be accurate. This is because a good number of people have been victims of such wars and can tell the true happenings.
Work cited
O’Brien Geoffrey. ‘Lincoln’: A More Authentic Wonderment. New York: NY Books. 2012. Print.
Scott A., O. A President Engaged in a Great Civil War. The New York Times 9 November 2012. C1. Print. Read More
Share:
Tags
Cite this document
(“History Civil War Movie - Lincoln (2012) Review Example | Topics and Well Written Essays - 500 words”, n.d.)
Retrieved from https://studentshare.org/history/1637353-history-civil-war-movie-lincoln-2012

...The Civil War The civil war in the United s of America started in 1861 and ended in 1865. It was the first and the most significant civil strive in the history of America’s existence. Unlike other wars that the USA has involved itself in, the civil War of 1861 was a war fought among Americans themselves. The states were divided between the North and the South. One of the main causes of the war was the difference in the economic strengths and manner of operations between the northern states and the southern states. While both regions were strongly...
3 Pages(750 words)Research Paper

...Abraham Lincoln, Slavery, and the Civil War Answer to Question 3 Being the 16th President of the USA, Abraham Lincoln’s leadership guided his country successfully through military, constitutional and moral crisis. He extensively opposed the idea of slavery in the U.S as manifested in his many campaigns and speeches. Chapter five topics: towards emancipation, clearly defines this event. As a leader from the Republican Party, Lincoln faced a number of challenges; there were demands by the republicans for harsher and cruel treatment against the South, extension of compromise towards the war democrats and last but not least, copperheads...
3 Pages(750 words)Essay

..., Slavery and the Origins of the Civil War.” OAH Magazine of History, 25.2 (2011): 35-44. Print. 5. From these documents, what would you say was Lincoln’s main goal in reconstructing the Union: changing the country, or simply reuniting it? Use sources from Chapter 8, “To Finish the Work We Are In”: pp. 188-210 (including the Second Inaugural Address). MLA 10. Be sure to REFERENCE all quoted passages and important information with page numbers from the book in parentheses at the end of the relevant sentence or quotation. If you are referring to the introduction to the book itself or of the sections of the book, put the abbreviation “intro” in front of the page reference...
3 Pages(750 words)Essay

...Abraham Lincoln, Slavery and Civil War Abraham Lincoln referred to as the 16th chief executive ofthe United States of America who served between the years of March1861 to April1865 when he was assassinated. The assassination came a few days after the end of the American civil war, which is said to have achieved in preserving the union, while ending slavery, and promoting economic and financial modernization (Clayborne 21). During the war in November 1863, President Lincoln gave the famous Gettysburg Address speech at the dedication of the Soldiers' National Cemetery in Gettysburg, Pennsylvania. The main...
3 Pages(750 words)Essay

...Abraham Lincoln: Slavery and the Civil War Question If his campaigns for the senate in 1858 and for the presidency in 1860 are considered together, how important was opposition to racial slavery in Lincoln’s political perspective at this time? Or did other subjects play equal or greater roles in his debates and speeches? Abraham Lincoln was never an actual supporter of slavery and he made great efforts to abolish it especially in the western territories and new states. It was important to Lincoln that people recognized the dignity of labor by differentiating it from slavery (Johnson, 53). Lincoln believed in free labour...
3 Pages(750 words)Essay

...and fighting against each other, a circumstance that is very difficult to imagine. Lincoln is recognized today at one of if not the greatest president in American history because he was the right man for the ultimate challenge, maybe the only man that could have emerged with the nation intact and slavery abolished. If not for slavery the Civil War would have not been deemed necessary. The South had decried disproportionate allocation of federal funds for decades but when the institution of slavery was threatened, the war was on. References Ball, Edward. (2010). Gone With the Myths New York Times Retrieved from...
3 Pages(750 words)Essay

...the move. After his successful election into the presidency in 1860 there was a successful secession of the south states from the union\, and this signaled the start of the civil war because of the stand on slavery of Abraham Lincoln. In conclusion, most of the speeches affiliated to Abraham Lincoln between 1858 and 1860 center on slavery and free America. His opposition to racial slavery was his greatest strong point that eventually earned him national recognition and the presidency. While there may have been other factors that influenced the flow and shape of his debates, racial slavery played the greatest role in his speeches and debates. Works Cited Johnson, Michael...
4 Pages(1000 words)Essay

...﻿ Abraham Lincoln and the Civil War Introduction The American civil war is a critical landmark in the history of America. The civil war marked an era of conflicts especially between the southern and the northern states. Various historians have postulated different causes of the war and the role played by the civil war leaders. The civil war resolved two issues that the American Revolution failed to solve. Firstly, it addressed the issue of division and recession of other States. Secondly, it settled the issue of slavery...
4 Pages(1000 words)Essay
sponsored ads
Save Your Time for More Important Things
Let us write or edit the movie review on your topic "History Civil War Movie - Lincoln (2012)" with a personal 20% discount.
GRAB THE BEST PAPER

Let us find you another Movie Review on topic History Civil War Movie - Lincoln (2012) for FREE!