Misconceptions of the Holocaust of Enslavement - Essay Example

Comments (0)
Add to wishlistDelete from wishlist
Cite this document
Summary
The following discussion “Misconceptions of the Holocaust of Enslavement” looks at the various misconceptions of the holocaust, and its impacts. It also discusses the major forms of resistance to the enslavement. The holocaust of enslavement serves as one of the greatest crimes against humanity…
Download full paperFile format: .doc, available for editing
HIDE THIS PAPERGRAB THE BEST PAPER92.3% of users find it useful 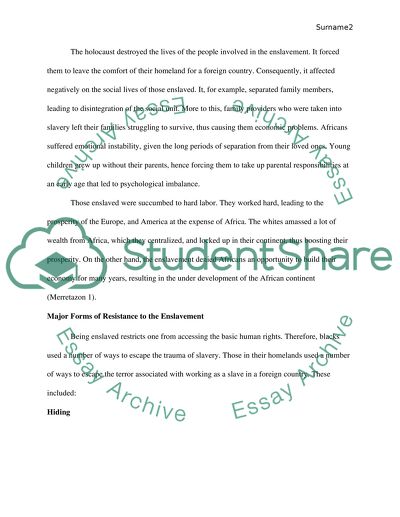 Extract of sample "Misconceptions of the Holocaust of Enslavement"

Another misconception relates to the assumption that no African influence exists in the current culture of African Americans. Alexander and Rucker refute the misconception by stating that “many dance forms in the United States were influenced by West-Central Africans” (129) and the Charleston dance gives a perfect example. Another misconception was related to the lynching of black men. Most lynches were associated with accusations of sexual incidents with a white woman. However, most lynches were as a result of a black person attempting to vote, demanding their rights, or operating a successful business (Ruffins 1)
Impact of the Holocaust
The holocaust destroyed the lives of the people involved in the enslavement. It forced them to leave the comfort of their homeland for a foreign country. Consequently, it affected negatively on the social lives of those enslaved. It, for example, separated family members, leading to disintegration of the social unit. More to this, family providers who were taken into slavery left their families struggling to survive, thus causing them economic problems. Africans suffered emotional instability, given the long periods of separation from their loved ones. Young children grew up without their parents, hence forcing them to take up parental responsibilities at an early age that led to psychological imbalance.
Those enslaved have succumbed to hard labor. They worked hard, leading to the prosperity of Europe, and America at the expense of Africa. The whites amassed a lot of wealth from Africa, which they centralized, and locked up in their continent, thus boosting their prosperity. On the other hand, the enslavement denied Africans an opportunity to build their economy for many years, resulting in the underdevelopment of the African continent (Merretazon 1).
Major Forms of Resistance to the Enslavement
Being enslaved restricts one from accessing basic human rights. Therefore, blacks used a number of ways to escape the trauma of slavery. Those in their homelands used a number of ways to escape the terror associated with working as a slave in a foreign country. These included:
Hiding
Some of them ran away into hiding in such places as the mountains, like in Brazil (Ruffins 1). They went to such places as they felt safer, and slaves were not sought in such places.
Suicide
There were people who committed suicide because they preferred to die, instead of becoming a slave. This follows the fact that slavery was associated with death, which made some people take their lives, instead of suffering in a foreign country.
Fighting
Some engaged in fights, for example, in Haiti. They fought the whites with the intention of defeating them and thus earning their freedom.
Amelioration and War
Slaves in foreign countries organized slave rebellions to conquer slavery. They continually sent messages to the whites that they needed to be given their freedom, as evidenced in Jamaica. Sam Sharpe’s rebellion in Jamaica in 1831 to 1832 involved the participation of many slaves as they advocated for their rights of humanity (Dunkley, 170).
Conclusion
In conclusion, enslavement involved a lot of dehumanization. It took advantage of people and introduced classes in the society as the white was seen as being superior to the blacks. Therefore, the resistance of the blacks was justified, given that all humans deserve to be treated with dignity.
Works Cited
Alexander, Leslie. & Rucker, Walter. Encyclopedia of African American History. Santa Barbara: CA: ABC-CLIO, 2010. Print.
Dunkley, Drive. Agency of the Enslaved: Jamaica and the Culture of Freedom in the Atlantic World. Lanham, MA: Lexington Books, 2013. Print.
Merretazon, Ari. The Holocaust of Enslavement Was Not That Long Ago. OpEdNews. November 4, 2009. Web. March 20, 2014. < http://www.opednews.com/articles/The-holocaust-of-enslaveme-by-Ari-Merretazon-090410-438.html>
Ruffins, Paul. Ten Myths, Half-Truths and Misunderstandings about Black History. Diverse Issues in Education. June 16, 2007. Web. March 20, 2014. < http://diverseeducation.com/article/7469/> Read More
Share:
Tags
Cite this document
(“Choose any topic. i dont have specific one Essay”, n.d.)
Retrieved from https://studentshare.org/history/1634808-choose-any-topic-i-dont-have-specific-one

(Choose Any Topic. I Dont Have Specific One Essay)
https://studentshare.org/history/1634808-choose-any-topic-i-dont-have-specific-one.

“Choose Any Topic. I Dont Have Specific One Essay”, n.d. https://studentshare.org/history/1634808-choose-any-topic-i-dont-have-specific-one.
Comments (0)
Click to create a comment or rate a document

CHECK THESE SAMPLES OF Misconceptions of the Holocaust of Enslavement

...20 May What We Talk About When We Talk About Love Analysis Paper A reign of terror took over the entire world in the mid 1900s when Adolf Hitler, the man that ruled and killed with an iron fist, took over in the form of dictatorship. He began as a young politician with dreams and ambition for his country; to help it succeed and see daylight in the form of growth and development. However, his ideals were not in tandem with others that shared the same land space as him; he was not tolerant towards ethnicity other than being German; he was responsible for the Holocaust or the genocide of the Jews; and has been come to be feared by many across the world. Adolf Hitler’s role in the Holocaust thus was of...
4 Pages(1000 words)Literature review

...? Elie Wiesel is the Nobel Peace Prize winner of 1986. His book en d “Night”, originally en d “Un di Velt Hot Geshvign” was published in 1956. The book was recently translated into French by Elie's wife, Marion Wiesel, in 2006. However, the English translation of the book has been released way back in 1960, translated by Stella Rodway. The novel is reminiscent of the experiences of the author after surviving and enduring torture during the holocaust. The author narrated his story of being at the Auschwitz and Buchenwald concentration camps with his father. Elie was the sole survivor of those camps and surprisingly enough, his narrations claim that even his father was able to survive an entire year of sheer torture....
5 Pages(1250 words)Dissertation

.... This is an important understanding to gain due to the fact that a misconception with regards to the overall scope of the Holocaust is one of the most common misconceptions that exists. Whereas it is true that the Germans were responsible for murdering unknown tens of thousands of Jews within Germany itself, the bulk of the Holocaust victims were derived not within Germany’s borders; rather, these were derived from areas of heavy Jewish concentration within Eastern Europe – specifically Poland and Ukraine (Cowen 167). In helping the viewer to come to a further understanding of the scope of the Holocaust and the personal ramifications that it had upon the...
5 Pages(1250 words)Essay

...Misconceptions in Mathematics: Fractions, Decimals and Percentages (Fatma) Faculty Misconceptions in Mathematics: Fractions, Decimals and Percentages Mathematics is an interesting subject if the basic concepts are clearly understood by children. Otherwise, it becomes one of the most difficult subjects for children. Children have different types of misconception in their understanding of mathematics. Some examples of misconceptions by students are multiplying two number always results in greater number and dividing one number by other number results is smaller number, individual discount percentage can be added arithmetically to find total discount percentage, adding...
4 Pages(1000 words)Essay

...HOLOCAUST After the commencement of extermination of the Jews by the Nazis, there were many responses to Nazi persecution by the Jews in various forms both collective and individual. There were factors that encouraged both rebellion and the inhibition of rebellion and resistance. For example, in a Jewish ghetto, often resistance would be held back by community leaders because of the fear that any Jews caught gathering weapons or planning escape would bring down punishment on the whole community. This was not outlandish thinking, either, because this is exactly how the Nazis meted out justice for individuals: against the whole community. On the other hand, there were organized rebellions and resistance, bolstered by...
2 Pages(500 words)Essay

...usually have some kind of misconceptions in every other Same is the situation with mathematics. These kinds of misconceptions are basically derived from their past knowledge as well as experiences, like the problem with numbers and digits. In order to remove their misconceptions and feel them to realize that math is not a tough job, teachers should work hard and help them in this way. In order to eliminate the mathematics related misconception teachers should work hard and try to make their student feel that every thing is possible and mathematics is not a hard subject to swallow. By recognizing the weak points of students and then immediately working on those weak areas...
6 Pages(1500 words)Essay

...The Holocaust The horrendous actions of the Third Reich during WWII are well documented. The result ofthe Nazi’s immoral ideologies included occupying much of Europe and the ‘final solution,’ the murder of more than six million Jews (Dawidowicz, 1986: 3). Throughout the history of the world, many countries have conquered others for a variety of motives while oppressing its citizens but what was the motive for systematically exterminating a particular race of people? How could such a passionate hatred of Jews spread through an entire national conscience causing such horrific acts to be perpetrated? Despite popular opinion, the Holocaust didn’t occur because the German people fell into a hypnotic trance...
6 Pages(1500 words)Essay

...The Holocaust happened for various reasons. Anti-Semitism in Europe helped facilitate a scapegoat for the Versailles Treaty and the economic depression in Germany. Hitler used propaganda to make all the Jews the root of all problems. As a result, Hitler could justify war and territorial gains. The German people readily accepted the necessity to exterminate an enemy. Propaganda allowed the Holocaust to continue. The war also allowed the Holocaust to go on for so long. Since the Diaspora, or scattering of the Jews from current day Israel, Europeans viewed them with distrust. Most of Western Europe and Russia were Christian states during the Middle Ages and after. Those states that were not...
2 Pages(500 words)Essay

...MYTHS, MISCONCEPTIONS, AND FEARS MYTHS, MISCONCEPTIONS, AND FEARS The use of hypnosis has been characterized by several myths and misconceptions that make its patronage quite questionable to some people. Key among these misconceptions is the idea that hypnosis is applicable only to a group of persons and not others. Normally, the introverted person is believed to be a major benefactor and not extroverts. This clearly cannot be right as the method makes use of state of mind and so can work for every person, regardless of the person’s personality. Among those who seek treatment with hypnosis and other onlookers also, there seem to be a common fear in the use of this...
1 Pages(250 words)Assignment

...﻿Africans during enslavement Africans during enslavement and oppression fought back with various methods depending on their situations. Examples from Sankofa and Roots will show how depending on station and generation Africans resisted their enslavement and oppression. Shola (Sankofa) and Bell (Roots) as house slaves did not fight directly. Kunta Kinte (Roots) and Shango (Sankofa) resisted more vigorously as field slaves. Kunta Kinte and Nunu (Sankofa) were also born in Africa. This created a deeper resistance due to having once been free. Bell and the daughter with Kunta, Kizzy, were born into slavery, thus did not know any other way. Depending on the slave’s station and generation the...
4 Pages(1000 words)Essay
sponsored ads
Save Your Time for More Important Things
Let us write or edit the essay on your topic "Misconceptions of the Holocaust of Enslavement" with a personal 20% discount.
GRAB THE BEST PAPER

Let us find you another Essay on topic Misconceptions of the Holocaust of Enslavement for FREE!