Comments (0)
Add to wishlistDelete from wishlist
Cite this document
Summary
Asserting that United States is giving itself much credit for NATO’s success in the Operation Unified Protector is not justified in any manner. Credit must be given where it is due, hence the immense contribution of United States in Libya’s military intervention cannot be disregarded. …
Download full paperFile format: .doc, available for editing
HIDE THIS PAPERGRAB THE BEST PAPER92.5% of users find it useful 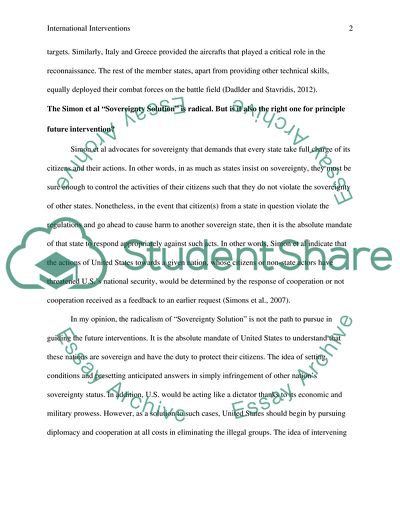 International Interventions of Affiliation International Interventions Are we giving ourselves too much credit forNATO’s “success” in the Libya operation?
Asserting that United States is giving itself much credit for NATO’s success in the Operation Unified Protector is not justified in any manner. Credit must be given where it is due, hence the immense contribution of United States in Libya’s military intervention cannot be disregarded.
To begin with, it is undeniable fact that out of the 14 member states that participated in the NATO operation, United States made the greatest contribution. Most of these nations relied on U.S. to meet their deficiencies in the operation. For instance, Washington took up the burden of offering roughly three-quarters of the intelligence, surveillance, and reconnaissance information that was indispensable in the protection of the civilians as well as reinforcing the arms embargo. Washington further went ahead to provide 75 percent of the refueling of planes that were heavily employed in the mission (Carvin, 2011). In the absence of this monumental support, one would be left wondering how strike aircrafts would have approached probable targets or how they would have rapidly responded to calls for urgent civilian protection. That notwithstanding, the operation relied on the expertise of American military personnel dispatched all the way from Europe. This was occasioned when it became apparent that other NATO member states lacked the technical skills on providing their aircraft with accurate target data (Dadlder and Stavridis, 2012).
In conclusion, in as much as U.S. contribution was outstanding, downplaying the contribution of the other member states would be a tragedy and simply sign of ingratitude. For instance, France and UK are credited for their role in the destruction of nearly a third of total targets. Similarly, Italy and Greece provided the aircrafts that played a critical role in the reconnaissance. The rest of the member states, apart from providing other technical skills, equally deployed their combat forces on the battle field (Dadlder and Stavridis, 2012).
The Simon et al “Sovereignty Solution” is radical. But is it also the right one for principle future intervention?
Simon et al advocates for sovereignty that demands that every state take full charge of its citizens and their actions. In other words, in as much as states insist on sovereignty, they must be sure enough to control the activities of their citizens such that they do not violate the sovereignty of other states. Nonetheless, in the event that citizen(s) from a state in question violate the regulations and go ahead to cause harm to another sovereign state, then it is the absolute mandate of that state to respond appropriately against such acts. In other words, Simon et al indicate that the actions of United States towards a given nation, whose citizens or non-state actors have threatened U.S.’s national security, would be determined by the response of cooperation or not cooperation received as a feedback to an earlier request (Simons et al., 2007).
In my opinion, the radicalism of “Sovereignty Solution” is not the path to pursue in guiding the future interventions. It is the absolute mandate of United States to understand that these nations are sovereign and have the duty to protect their citizens. The idea of setting conditions and presetting anticipated answers in simply infringement of other nation’s sovereignty status. In addition, U.S. would be acting like a dictator thanks to its economic and military prowess. However, as a solution to such cases, United States should begin by pursuing diplomacy and cooperation at all costs in eliminating the illegal groups. The idea of intervening forcefully simply because the unexpected answer was received my serve to create more adversaries rather than allies.
References
Carvin, A. (2012, February 24). Gadhafis Compound Slowly Being Erased From History. Retrieved April 10, 10, from the two-way: http://www.npr.org/blogs/thetwo-way/2012/02/24/147376148/gadhafis-compound-slowly-being-erased-from-history
Dadlder, I. and Stavridis, J.G. (2012). NATOS Victory in Libya; the right way to run an intervention. Retrieved from: http://www.foreignaffairs.com/articles/137073/ivo-h-daalder-and-james-g-stavridis/natos-victory-in-libya
Simons, A. et al. (2007).The Sovereignty Solution; a commonsense approach to global security. New York, NY: Naval Press.
United States of America (2013). National Security Strategy. Washington, DC: Government Press. Read More
Share:
Tags
Cite this document
(“International Interventions Assignment Example | Topics and Well Written Essays - 500 words”, n.d.)
International Interventions Assignment Example | Topics and Well Written Essays - 500 words. Retrieved from https://studentshare.org/history/1620660-international-interventions

CHECK THESE SAMPLES OF International Interventions

...level, job position, type of hospital and nursing grade among other variables simultaneously, and how they influenced the outcome of the study (Lin & Ma, 2009). However, because the exposures and outcomes of this study were evaluated simultaneously, it might not have been possible to make a distinction whether the exposures preceded or followed the outcomes, and as a result cause and effect associations are not evident. Complementary Therapeutic Nursing Interventions Post-Operative Pain Management The management of pain is a predominant dilemma in nursing. Available researches indicate that nurses do not prioritize pain management in their practice (Young, Horton, & Davidhizar, 2006). Available research indicates that it...
16 Pages(4000 words)Coursework

.... It relates to those persons who have persisting symptoms, where as the evidence base of family intervention is international, and it is mainly obtained from persisting and relapsing groups of symptoms. Interventions. Early intervention. Evidence reviews have raised many questions. To start with, there are questions which of the parents would benefit from these methods. Considerable interest in treating and establishing early identification of persons with psychosis has increased globally. Having been stimulated by the pioneer works of McGorry in Melbourne, Australia, a movement that is the worldwide has come up to establish services that can be employed in early...
12 Pages(3000 words)Essay

Compare between the three models of international human rights (statist, cosmopolitan, and internationalist) based on the streng

...? Compare between the three models of international human rights (statist, cosmopolitan, and internationalist) based on the strengths and weaknesses of each model. Name; University: Introduction Human rights are part and parcel of politics today. There models of human rights that are used internationally. They include statist, internationalist and cosmopolitan. This paper discusses the similarities of these models and potency and weaknesses1. Idealism forms a premise as far as humanitarian models of humanitarian interventions are concerned. These models are applicable to a lot of scenarios. The major issues that these theories seek to address include civil wars, conflict prevention as well as resolution. Humanitarian interventions... . Never...
3 Pages(750 words)Essay

...﻿Interdisciplinary Interventions: Depression Introduction: A sixty-five year old Afro-American female was admitted. She was diagnosed as suffering from depressed mood and demonstrating signs of extreme loneliness, isolation and the lack of desire to engage in any activity, which had resulted from bereavement. This paper attempts to evaluate the interventions needed in the case of this patient, with particular emphasis on the nursing interventions. Case Study: The patient had been married and had five children. Her children left home at an early age to find their own careers and had settled far away from their home. The distance had gradually led to only brief and infrequent contacts being the only interaction between them... of will...
4 Pages(1000 words)Essay

...Interventions – One-to-One Training Introduction In the fast changing business world employees and job roles are altering at a quick pace. Training programs have to be flexible to meet this new challenge in the business world. One-to-one training programs offer flexibility, adaptation, and just in time delivery of job skills (Shermon, 2008, p.343). Key Features of One-to-One Training One-to-one training moves the site of the training from classrooms, where there is limited scope for simulation of the job environment, to the actual live environment of where the job will be performed (Shermon, 2008, p.343). The scope of one-to-one training programs is enlarged to take in the actual job requirements vis-à-vis the...
2 Pages(500 words)Research Paper

...that directive strategy “highlights the managers right to manage change and the use of authority to impose change with little or no involvement of other people” (Lockitt, 2004). Under expert strategies, the management of the organization depends pretty much on external expert advice. This particular approach is recommended for long term purposes after the company exhausts all its internal protocols through the directive strategies. 3.0 Evaluation of Impacts of the Resources From an evaluative perspective, it can be seen that the move to identify and implement an intervention would present mixed impacts on the organization. It is however soothing to know that the eventual impact would be a positive...
2 Pages(500 words)Essay

Let us find you another Assignment on topic International Interventions for FREE!