The Palestine-Israel Conflict and the United States - Essay Example

Comments (0)
Add to wishlistDelete from wishlist
Cite this document
Summary
It begun towards the end of the 20th century and its resolution remains a mystery despite many efforts from the international community to establish a peaceful solution. This paper explores the main…
Download full paperFile format: .doc, available for editing
HIDE THIS PAPERGRAB THE BEST PAPER91.1% of users find it useful 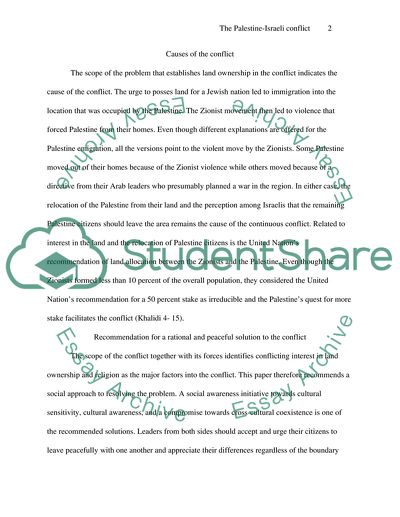 Extract of sample "The Palestine-Israel Conflict and the United States"

The Palestine-Israeli conflict and the United s Introduction The Palestine-Israeli conflict is one of the globally recognized conflicts. It begun towards the end of the 20th century and its resolution remains a mystery despite many efforts from the international community to establish a peaceful solution. This paper explores the main problem in the conflict, gives examples of its intensity and manifestations, explain its causes and recommend a rational and peaceful solution to the conflict.
Main problem in the conflict
The history of Israel, its establishment and the scope of the conflict between Israel and Palestine offers a basis for understanding the main problem in the conflict. History identifies land ownership and religion as the main problems in the conflict. The two societies believe that the subject land is their ancestral land and that they have a right over its ownership. Religious differences could also play a secondary role in facilitating the conflict through undermining resolution initiatives (Whitbeck 1; Khalidi 4-5).
Gravity and manifestation of the conflict
The conflict has been a serious one and its gravity can be identified from its effects and failure to find a solution over the long time of the conflict’s existence. Even efforts by international institutions such as the United Nations has failed to resolve the problem and this means that involved parties have intensive interest that they are not willing to compromise (Whitbeck 1). The conflict has manifested in diversified scopes that include large number of Arab refugees (Childers 1) and the level of oppression that Palestine citizens experience under Israeli forces (Carter 1).
Causes of the conflict
The scope of the problem that establishes land ownership in the conflict indicates the cause of the conflict. The urge to posses land for a Jewish nation led to immigration into the location that was occupied by the Palestine. The Zionist movement then led to violence that forced Palestine from their homes. Even though different explanations are offered for the Palestine emigration, all the versions point to the violent move by the Zionists. Some Palestine moved out of their homes because of the Zionist violence while others moved because of a directive from their Arab leaders who presumably planned a war in the region. In either case, the relocation of the Palestine from their land and the perception among Israelis that the remaining Palestine citizens should leave the area remains the cause of the continuous conflict. Related to interest in the land and the relocation of Palestine citizens is the United Nation’s recommendation of land allocation between the Zionists and the Palestine. Even though the Zionists formed less than 10 percent of the overall population, they considered the United Nation’s recommendation for a 50 percent stake as irreducible and the Palestine’s quest for more stake facilitates the conflict (Khalidi 4- 15).
Recommendation for a rational and peaceful solution to the conflict
The scope of the conflict together with its forces identifies conflicting interest in land ownership and religion as the major factors into the conflict. This paper therefore recommends a social approach to resolving the problem. A social awareness initiative towards cultural sensitivity, cultural awareness, and a compromise towards cross-cultural coexistence is one of the recommended solutions. Leaders from both sides should accept and urge their citizens to leave peacefully with one another and appreciate their differences regardless of the boundary conflict. Formation of a truth and reconciliation committee to look into the conflict and reconcile the two countries is another peaceful approach that should be considered.
Works cited
Carter, Jimmy. “How I see Palestine.” The Carter Center. December 8, 2006. Web. March 27, 2013. < http://www.cartercenter.org/news/editorials_speeches/latimes_palestine_081206.html>.
Childers, Erskine. “The other exodus.” < http://www.users.cloud9.net/~recross/israel-watch/ErskinChilders.html>.
Khalidi, Walid. “Plan Dalet: Master plan for the conquest of Palestine.” N.d. Web. March 27, 2013. < http://palestine-studies.org/enakba/military/Khalidi,%20Plan%20Dalet%20Revisited.pdf>.
Whitbeck, John. “The ethnic cleansing of Palestine.” Counter Punch. 2007. Web. March 27, 2013. < http://www.counterpunch.org/2007/01/27/the-ethnic-cleansing-of-palestine/>. Read More
Share:
Tags
Cite this document
(“The Palestine-Israel Conflict and the United States Essay - 2”, n.d.)
Retrieved from https://studentshare.org/history/1619201-the-palestine-israel-conflict-and-the-united-states

(The Palestine-Israel Conflict and the United States Essay - 2)
https://studentshare.org/history/1619201-the-palestine-israel-conflict-and-the-united-states.

“The Palestine-Israel Conflict and the United States Essay - 2”, n.d. https://studentshare.org/history/1619201-the-palestine-israel-conflict-and-the-united-states.
Comments (0)
Click to create a comment or rate a document

...the incidents of the late nineteenth century which caused a stir among the Palestinian community and the Muslim World at large. Since 1948, the struggle over Palestine between the Jews and the Arabs became an inter-state issue. The state of Palestine was removed from the map and the Arabs consider it their duty to retrieve it and restore its fame. With the end of the Second World War, the United States and the Soviet Union also got involved in the growing complexities of the conflict which the Britain could no longer handle. For the Arabs, Zionism was an eccentric intrusion in the Palestinian politics. It felt incomplete...
13 Pages(3250 words)Essay

...(201090 explored the issue of understanding the “other” in formulating a solution to the current conflict between Palestinians and the Zionist state, and concluded that limitations in understanding the “other” and the strong religious conservative ideologies from the Palestinians were mostly to blame of the current Palestinian predicaments. Israel Prime Minister Ben Gurion in the 1940s had suggested establishment of a Jews state, but went ahead to affirm the rights of the Arab minorities and their rights to a national autonomy. The Jewish government was ready to negotiate with the Palestinian pseudo Arab leadership on governance in Palestine and the...
12 Pages(3000 words)Dissertation

...? Introduction Israel and Palestine have always been in news for their fights, possession of lands and recently because of the escalating human rights crises. Some people root this conflict back to the period when Romans occupied the territory however, the conflict became intense in 19 century when Jews kicked out the Palestinian Muslims and established their state in the territory. Though the Israel is a registered country in the United Nations but many of the countries have yet not accepted it as an independent country and claim it as ‘Jewish Occupied Palestine’. Conflict The primary...
3 Pages(750 words)Essay

The Palestine-Israel Conflict and the United States

...at times. While border and land issues constitute the central problem in Palestine-Israel conflict, there are other contributory factors that exacerbate the conflict between Israel and Palestine. These factors include, but are not limited to, water rights, security, Israeli settlements, refugee issues, violence outside Israel, international influence, and occupation of West Bank by Israeli military and people (Salinas & Rabia 183). With the conflict dating back to the 20th century, the international community has responded and tried to unite the two sides. The United...
2 Pages(500 words)Essay

The Palestine-Israel Conflict and the United States

...Palestine-Israeli Conflict The constant conflict among these two nations has brought utter underdevelopment among these states. Israel, however, has had an upper hand in the conflict since it has enormous support from the United States. The United States, as a superpower, has also influenced the United Nations decisions and resolution. Palestine has, therefore, had a lopsided share of troubles. This essay seeks to compare and contrast the statistics presented in the website Ifamericansknew.com. The website details that the Israelis...
1 Pages(250 words)Essay

...Part 2: Order #1177226 Reply Based on the information that you have relayed regarding Israel-Palestine Conflict, I agree with you that its basis is no purely religious but those acting as instigators use creed to solicit support from the locals. This is by making them deem what they are doing is good and aligns with religion whereby in reality they are only agitating fiercely towards realizing interests of few. The tricky regarding somehow using religion as a basis by this conflict’s instigators is evident in Frisch’s study that you have cited and even confirmed by current information relayed by the media. Hence, religion in its sense serves the role of rallying masses...
1 Pages(250 words)Essay

The Roots of the Israeli-Syrian Conflict

...﻿Introduction The Israeli-Syrian conflict arises out of an ongoing political struggle in the Middle East over and around Israel’s efforts to establish itself as an independent Jewish nation.1 The Arab-Israeli Middle East conflict was accentuated following the First World War when British troops occupied an area known as Palestine and a number of Jewish immigrants came to the area. Arab resistance and animosity toward the immigrants led to a number of violent conflicts which garnered international attention following the Second World War. With encouragement from the United Nations, three world powers namely; the Soviet Union, the United States and Great Britain acted as mediators and attempted to divide the territory but rather than...
18 Pages(4500 words)Coursework
sponsored ads
Save Your Time for More Important Things
Let us write or edit the essay on your topic "The Palestine-Israel Conflict and the United States" with a personal 20% discount.
GRAB THE BEST PAPER

Let us find you another Essay on topic The Palestine-Israel Conflict and the United States for FREE!