The successes of the Ottoman-Turk Empire - Essay Example

Comments (0)
Add to wishlistDelete from wishlist
Cite this document
Summary
This however happened as a result of many reasons including: advanced weaponry system, large military, nationalism and great wealth…
Download full paperFile format: .doc, available for editing
HIDE THIS PAPERGRAB THE BEST PAPER95.5% of users find it useful 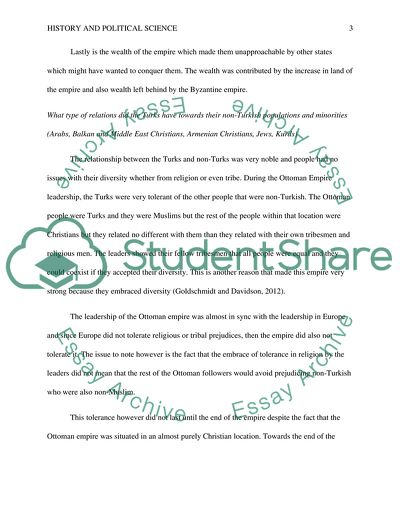 Extract of sample "The successes of the Ottoman-Turk Empire"

The successes of the Ottoman-Turk Empire Affiliation: Explain what the reasons for the military successes of the Ottoman-Turks in creating a third but non-Arab Islamic empire and reuniting the Greater Middle-East/Gulf region
The Ottoman-Turks were known to be very powerful and this power and strength is what led them to create a third non-Arab Islamic empire. This however happened as a result of many reasons including: advanced weaponry system, large military, nationalism and great wealth (Goldschmidt and Davidson, 2012).
The Ottoman Empire superseded the Byzantine Empire and it came into power around the 14th Century. The Byzantine people were not patriots and neither did they care much for their empire as the Ottomans. The lack of nationalism (in terms of unity and strength) provided a weaknesses that Ottoman took advantage of and conquered them obtaining that empire and calling it their own.
The military strength of the Ottoman Empire in terms of the advanced weapons they used was immense. These weapons were acquired from those places they conquered and also as a result of the large wealth that enabled them to purchase the weapons. This gave them an upper hand when it came to fighting other empires and they therefore acquired a large land.
The military number was great and especially because the Ottoman used two different types of military tapping on the strengths of each group. These two groups were the locals and the Kapti Kallari forces and the locals. The strength exuded by such military power led to the success of the whole empire in general.
Lastly is the wealth of the empire which made them unapproachable by other states which might have wanted to conquer them. The wealth was contributed by the increase in land of the empire and also wealth left behind by the Byzantine empire.
What type of relations did the Turks have towards their non-Turkish populations and minorities (Arabs, Balkan and Middle East Christians, Armenian Christians, Jews, Kurds)
The relationship between the Turks and non-Turks was very noble and people had no issues with their diversity whether from religion or even tribe. During the Ottoman Empire leadership, the Turks were very tolerant of the other people that were non-Turkish. The Ottoman people were Turks and they were Muslims but the rest of the people within that location were Christians but they related no different with them than they related with their own tribesmen and religious men. The leaders showed their fellow tribesmen that all people were equal and they could coexist if they accepted their diversity. This is another reason that made this empire very strong because they embraced diversity (Goldschmidt and Davidson, 2012).
The leadership of the Ottoman empire was almost in sync with the leadership in Europe and since Europe did not tolerate religious or tribal prejudices, then the empire did also not tolerate it. The issue to note however is the fact that the embrace of tolerance in religion by the leaders did not mean that the rest of the Ottoman followers would avoid prejudicing non-Turkish who were also non-Muslim.
This tolerance however did not last until the end of the empire despite the fact that the Ottoman empire was situated in an almost purely Christian location. Towards the end of the empire, the empire started giving preference to the Muslim leaders and they even made a silent rule than the Sultan of the empire always had to be a Sunni Muslim.
References
Goldschmidt, A. and Davidson, L. (2012). A Concise History of the Middle East. Colorado: Westview Press. Read More
Share:
Tags
Cite this document
(“The successes of the Ottoman-Turk Empire Essay Example | Topics and Well Written Essays - 500 words”, n.d.)
The successes of the Ottoman-Turk Empire Essay Example | Topics and Well Written Essays - 500 words. Retrieved from https://studentshare.org/history/1615810-the-successes-of-the-ottoman-turk-empire

“The Successes of the Ottoman-Turk Empire Essay Example | Topics and Well Written Essays - 500 Words”, n.d. https://studentshare.org/history/1615810-the-successes-of-the-ottoman-turk-empire.
Comments (0)
Click to create a comment or rate a document

CHECK THESE SAMPLES OF The successes of the Ottoman-Turk Empire

...Comparisons between the Ideologies and Policies of the Ottoman and the Safavid Empires The two empires, the Safavid and the Ottoman, were built on two different sets of ideologies, rules, regulations and necessarily two different sets of belief. The geographical and the temporal features that prepared the plots for the rises of these two empires were different in nature. When the fragmentation of the Seljuk Sultanate of Rum after the Mongol invasion in Anatolia in the late 13th century planted the seed of the Ottoman Empire in one of the Beyliks, the fragments of the Turkish Anatolia, the Safavid Empire...
3 Pages(750 words)Essay

..., running the distance from the Caucasus to North Africa. Culture The cultural realities of the Ottoman Empire progressed over many centuries as the Turk regimes occupied, integrated, and influenced the cultures of subjugated peoples and their territories. There was a solid influence from the languages and traditions of Islamic civilizations, particularly Arabic, whereas Persian civilization had a substantial influence through the deeply ‘Persianized’ political structure of the Seljuq Turjks, the ancestors of the Ottomans (Barkey & Hagen 1997, 33). According to Aksan (2004), the Ottoman Empire, throughout its historical development, had...
4 Pages(1000 words)Essay

...and administration, military strength and economic power of the Ottoman Empire in golden age and in decline period. Government and Admiration: Government and administration decide the ups and downs of an Empire and it was true in the case of the Ottoman Empire. For many years the Ottoman government was ruled by very efficient leaders. It can be seen in the golden age that the officials chosen by the Ottomans was based on merit and so Arabs and non-Turks could associate with government and military even in high positions (New Challenges for Africa and the Islamic World 1450-1750, p.476). This method was...
4 Pages(1000 words)Essay

...of the Shiites to the Iraqi population which was perceived to be a moral duty. Finally, it was proved that the attempts of the Sultan of the Ottoman Empire fell flat on its face but formed the basis of the republican Turkish nation building, which has been a success. This historical heritage of past concepts and conflicts explains the current geopolitical occurrences in the Middle East and Central Asia.2 As at the imminent collapse of the Ottoman Empire, the sultanate became only limited to the plateau at Anatolia. The implementation of the Treaty of Serves weakened the empire as it lost its geopolitical positioning that deprived it of...
4 Pages(1000 words)Essay

...? Section/# The Golden Age of the Ottoman Empire: A Discussion of the Power and Importance of the Process ofCentralisation Though the use of superlatives is often incorporated with regards to understanding and defining many geopolitical structures that have existed since the dawn of time, it is not hyperbole to state that the Ottoman Empire was one of the longest lived, richest, and most successful empires that the world has ever seen. Beginning in the year 1299 and lasting up until the establishment of the Turkish Republic in 1922, the 623 year span of time in nearly continual power that this Empire was able to exert was...
10 Pages(2500 words)Research Paper

The history of Ottoman empire

...Ottoman empire The Ottoman empire was an imperial that existed from 1299 to 1922. At the height of its power in the 16th century, it included Anatolia, the Middle East, parts of North Africa, and much of south-eastern Europe to the Caucasus. It comprised an area of about 5.6 million km squared, though it controlled a much larger area through indirect rule in adjoining areas dominated mainly by nomadic tribes. The Empire was situated in the Middle East and West, and interacted with both the East and the West throughout its six-century history . The Ottoman Empire was established by the tribe of Kinsik Oghuz...
3 Pages(750 words)Essay

ECONOMICS OF THE OTTOMAN EMPIRE

...Economics of the Ottoman Empire Despite the decline of the Ottoman Empire after the 17th century, this imperial empire achieved significant fame because of its economic prowess and value of people welfare. The Ottoman man empire is believed to have had a well-organized government that was powered by economic gains in various areas (Bulut 192). The success of Ottoman Empire in commerce and economic remain to be remembered as sheer display of strength for the empire at a time when commerce was at infancy. The success of...
1 Pages(250 words)Essay

...side of colonization such as the Ottoman Empire is the fact that they ruled over numerous countries and did not treat them in a just fashion. At its heights of its powers, the Ottoman Empire ruled over the following nations: Turkey Egypt Greece Bulgaria Romania Macedonia Hungary Palestine Jordan Lebanon Syria Parts of Arabia Much of the coastal strip of North Africa This is a huge number and goes to show the amount of plundering the Ottomans did in order to sustain them. They ruled the roost in those days and colonization was the driving factor behind them having the surge they had in the medieval ages. The Turks very well understood...
6 Pages(1500 words)Essay

...Legacy of the Ottoman Empire The contributions of Ottoman Empire to the development of Arab world in general and Turkey particular cannot be neglected. Even though Ottomans tried to extend their power to the entire Arab world, they were keen in preserving the values and beliefs of Islamic religion. They never tried to dilute religious principles and beliefs for economic and political gains. The contributions or the legacies of Ottoman Empire in political, economic and cultural circles are still helping Arab world in many ways. One of the major legacies left behind by the Ottoman Empire...
2 Pages(500 words)Essay
sponsored ads
Save Your Time for More Important Things
Let us write or edit the essay on your topic "The successes of the Ottoman-Turk Empire" with a personal 20% discount.
GRAB THE BEST PAPER

Let us find you another Essay on topic The successes of the Ottoman-Turk Empire for FREE!