Comments (0)
Add to wishlistDelete from wishlist
Cite this document
Summary
This is because Nation building in Bosnia/Kosovo began in 1995 and has been ongoing until the present. Iraq’s state building was interrupted by the US led attack in 2003. The US and British military forces have been…
Download full paperFile format: .doc, available for editing
HIDE THIS PAPERGRAB THE BEST PAPER91.4% of users find it useful 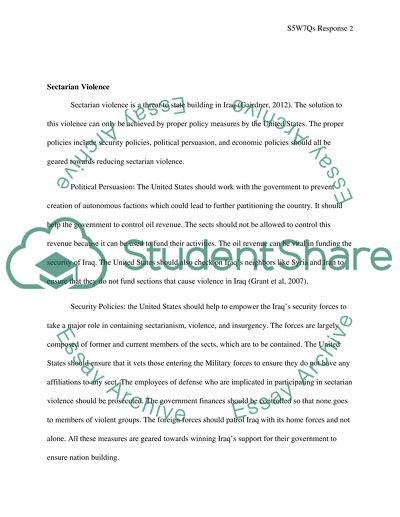 Running head: HISTORY AND POLITICAL SCIENCE S5W7Qs Response Insert Insert Grade Insert Making Progress Bosnia/Kosovo is making progress in state building than Iraq. This is because Nation building in Bosnia/Kosovo began in 1995 and has been ongoing until the present. Iraq’s state building was interrupted by the US led attack in 2003. The US and British military forces have been used to protect the Iraq civilians and humanitarian aid workers. There has been opposition to these forces and this has caused a security concern with frequent attacks on this military forces. There has also been criticism that the military personnel employed in Iraq are less in comparison with its population. In contrast, there was sufficient military personal in the case of Kosovo and Bosnia. This insecure environment in Iraq has greatly curtailed nation building in Iraq. In Bosnia and Kosovo there is relative peace and security that has facilitated nation building (Lampe, 2013).
Nation building in Iraq has also not had good progress because of the inappropriate US policies. The country is still insecure but due to pressures from home the Obama administration is promising to withdraw all the troops from Iraq. State building process is a long term goal, take for example nation building in Bosnia began in the winter of 1995 and that in Kosovo began in the spring of 1999 (Lecture Notes, 2011). This process is presently still ongoing. For Iraq to realize a stable state it is necessary for its security to be boosted. This has not been the case; foreign military personnel have been attacked in Iraq leading to calls for withdrawal of the personnel and for governments not to lose popularity with their citizens they have been reducing their military presence in Iraq.
Sectarian Violence
Sectarian violence is a threat to state building in Iraq (Gairdner, 2012). The solution to this violence can only be achieved by proper policy measures by the United States. The proper policies include security policies, political persuasion, and economic policies should all be geared towards reducing sectarian violence.
Political Persuasion: The United States should work with the government to prevent creation of autonomous factions which could lead to further partitioning the country. It should help the government to control oil revenue. The sects should not be allowed to control this revenue because it can be used to fund their activities. The oil revenue can be vital in funding the security of Iraq. The United States should also check on Iraq’s neighbors like Syria and Iran to ensure that they do not fund sections that cause violence in Iraq (Grant et al, 2007).
Security Policies: the United States should help to empower the Iraq’s security forces to take a major role in containing sectarianism, violence, and insurgency. The forces are largely composed of former and current members of the sects, which are to be contained. The United States should ensure that it vets those entering the Military forces to ensure they do not have any affiliations to any sect. The employees of defense who are implicated in participating in sectarian violence should be prosecuted. The government finances should be controlled so that none goes to members of violent groups. The foreign forces should patrol Iraq with its home forces and not alone. All these measures are geared towards winning Iraq’s support for their government to ensure nation building.
Economic Assistance: USA’s aid should be geared towards increasing government stability and reduction of sectarian violence. Other programs need to be postponed. They cannot be effective if violence exists.
Reference List
Gairdner, D. (2012). Risk and violence in Iraq’s new sectarian balance. NOREF Report
Grant, A et al. (2007). The United States should reassess priorities and consider next steps in Iraq. Research Brief .Washington DC: RAND
Lampe, J. R. (2013). Bosnia and Kosovo...Afghanistan and Iraq...Connecting the Dots Constructively. Washington DC: Wilson Centre. Retrieved February 2nd, 2013 from Lecture Notes (2011). Seminar #5: Conflict Resolution and Post-Conflict Reconstruction in the International System &Week #8—Application of Relevant Approaches to and Theories on Nation/State Building to Iraq Case Study (2003-2011). Read More
Share:
Tags
Cite this document
(“S5W7Qs Response Assignment Example | Topics and Well Written Essays - 500 words”, n.d.)
S5W7Qs Response Assignment Example | Topics and Well Written Essays - 500 words. Retrieved from https://studentshare.org/history/1613993-s5w7qs-response

CHECK THESE SAMPLES OF S5W7Qs Response

...Response to and 2 al Affiliation: Response to and 2 Response to The conversation between student 1 and his mother in an example of a transactional model of communication. Their communication is surrounded by a lot of obstructions. However student 1 and the mother seemed happy after the conversation. This indicates that communication between them was successful. The moods of both student 1 and his mother are influential in facilitating the conversation. I agree with the student’s idea that good moods facilitate effective communication. They are in a happy and excited mood and are able to communicate well. Student 1 claims that the noise from the television distracted their attention a...
1 Pages(250 words)Assignment
sponsored ads
Save Your Time for More Important Things
Let us write or edit the assignment on your topic "S5W7Qs Response" with a personal 20% discount.
GRAB THE BEST PAPER

Let us find you another Assignment on topic S5W7Qs Response for FREE!