Comments (0)
Add to wishlistDelete from wishlist
Cite this document
Summary
There have been numerous conflicts in the world today and therefore with increasing resolution efforts there have been various mechanisms of tackling the problem faced by post war nations. As a result, the international and local communities have continually pushed for the…
Download full paperFile format: .doc, available for editing
HIDE THIS PAPERGRAB THE BEST PAPER96.5% of users find it useful 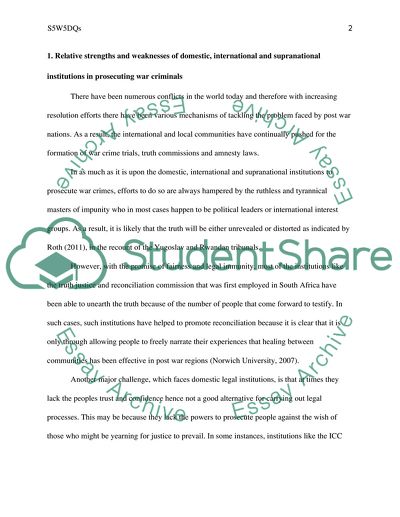 S5W5DQs Insert Insert Grade Insert Relative strengths and weaknesses of domestic, international and supranational institutions in prosecuting war criminals
There have been numerous conflicts in the world today and therefore with increasing resolution efforts there have been various mechanisms of tackling the problem faced by post war nations. As a result, the international and local communities have continually pushed for the formation of war crime trials, truth commissions and amnesty laws.
In as much as it is upon the domestic, international and supranational institutions to prosecute war crimes, efforts to do so are always hampered by the ruthless and tyrannical masters of impunity who in most cases happen to be political leaders or international interest groups. As a result, it is likely that the truth will be either unrevealed or distorted as indicated by Roth (2011), in the recount of the Yugoslav and Rwandan tribunals.
However, with the promise of fairness and legal immunity, most of the institutions like the truth justice and reconciliation commission that was first employed in South Africa have been able to unearth the truth because of the number of people that come forward to testify. In such cases, such institutions have helped to promote reconciliation because it is clear that it is only through allowing people to freely narrate their experiences that healing between communities has been effective in post war regions (Norwich University, 2007).
Another major challenge, which faces domestic legal institutions, is that at times they lack the peoples trust and confidence hence not a good alternative for carrying out legal processes. This may be because they lack the powers to prosecute people against the wish of those who might be yearning for justice to prevail. In some instances, institutions like the ICC have only prosecuted individuals bearing the greatest responsibility that might leave most of the perpetrators still roaming in the streets.
2. Extent of indispensability in reconciliation between perpetrators and victims of atrocities by the use of international systems
The various tribunals, truth commissions and amnesty laws have been effective in the healing of communities in post war nations even though sometimes there have been difficulties because of the way the victims on one hand and the perpetrators on the other have responded to such institutions.
First, some of the institutions like the truth and reconciliation commissions have been seen as helpless in bringing the guilty to book. The main work of that commission in to find out the historical injustices that may in turn open up new wounds that may result in counteraccusations. The two warring sides may therefore start to view each other suspiciously. Tepperman (2002) further indicates this by stating the way such efforts have resulted in limited number and extent to which such issues have been resolved.
Secondly, the institutions may be faced with constraints in terms of financial and logistical inadequacies. As indicated by Dickinson (2003), the East Timor hybrid court for instance was faced with such inadequacies. There was inadequate staff and funding leading to a limited number of cases that could be handled by the court. Moreover, such institutions have been faced by interference from both local and international individuals that might be directly or indirectly involved in the process of reconciliation or ensuring that justice is served to the victims. For instance, the Guatemalan truth commission’s findings were shelved because of the leadership of the country that was highly influenced by past perpetrators (Tepperman, 2002).
In conclusion, it is essential that the international institutions continue to be established even though their operations should be credible and well funded to avoid failures.
References
Dickinson, L. (2003). The Promise of Hybrid Courts. The American Journal of International Law, Vol. 97, No. 2 (Apr., 2003), pp. 295-310.
Norwich University (2007). Master of Diplomacy Lecture Notes. Seminar 5: Conflict Resolution and Post-Conflict Reconstruction in the International System.
Roth, K. (2011). The Case for Universal Jurisdiction. Foreign Affairs, Vol.80. no 5 pp150-154.
Tepperman, J. (2002). Truth and Consequences. Foreign Affairs, 81(2): 128-145. Read More
Share:
Tags
Cite this document
(“S5W5DQs Essay Example | Topics and Well Written Essays - 500 words”, n.d.)
S5W5DQs Essay Example | Topics and Well Written Essays - 500 words. Retrieved from https://studentshare.org/history/1612196-s5w5dqs

CHECK THESE SAMPLES OF S5W5DQs

Impact of micro and macro policies on the elderly with dementia

... Impact of micro and macro policies on the elderly with dementia Macro and micro policies are policy frameworks formulated to ensure quality in the delivery of healthcare services to a segmented client group in a particular societal setting. Their effectiveness can be through the establishment of proper structures, which essentially create a link between the relevant authorities and the receptor. Mostly in the health sector, formulation of such frameworks ensures the well-being of the segmented people as per their needs. For instance, the kind of policies governing the care of children would be very different from those governing adults especially the elderly. Therefore, sensitivity on the handling of these two classes of people... Impact of micro and...
10 Pages(2500 words)Essay

... Prospectus For this prospectus, I have selected the third suggested research question, about the greatest crime threat today and the best methods to combat it. My initial thesis is that cyber-crime is the most dangerous type of crime in today's world, due to the saturation of technology, computers, and especially Internet networks in both home and business life. The best methods of combating this type of crime, especially given the complex nature of cyber-crime, will require more extensive research. This topic seems interesting to me because of the cutting-edge nature of cyber-crime, and so the research that I do will be current and relevant to my life today and into the future. In order to research this topic, the first step... Prospectus For this...
1 Pages(250 words)Thesis Proposal

Power, Ethnicity and Sexuality in Kehinde and A Distant Shore

...My 3 November 2007 Our Energy Future Government investment in hydrogen technology is the most promising way to provide a secure energy future for the United States, and in turn, for the world. By developing a hydrogen economy, we will have abundant energy to fuel all of the scientific advances and universe explorations to come as our civilization moves from the space and information ages into an even more energy-intensive age. With hydrogen power, we will once and for all completely sever our deadly dependence on foreign oil. Cars with hydrogen fuel cells and plants with hydrogen generators will enable us to finally reverse climate change and environment destruction, as well as rediscover clean air. Without developing renewable energy... 3 November...
6 Pages(1500 words)Essay

...Life in Prison Order No. 264218 No. of pages: 2 Premium 6530 Glenn Loury, an economist at the Brown says that “we are managing losers by confinement.” The losers he refers to here are the prisoners and the confinement is a euphemism for a prison sentence. A person incarcerated for days, months or life, is set to lead a life of despair behind the walls of the prison, where he lives out the sentence for his crime. Prisons impact a nation and its economy, along with the inmate in far greater ways than one can imagine. Sociologist Bruce Weber terms prisons “engines of inequality”, which not only widens the gap between the rich and poor , but also erodes a person’s self esteem for life . In order to understand the harsh life of a prisoner one... in Prison...
2 Pages(500 words)Term Paper

...In the age of internet marketing and globalized economic analysis, international population demographics are becoming increasingly important. Whether considering the political environment, the health and social demographics, or the educational and ideological statuses of a set of host countries in the international market, it is critical to weigh the demographic factors that will have an impact upon a given set of consumers in understanding their viability as targeted markets. Recognition and analysis of demographic characteristics of consumers in different countries are important, further, for public administration purposes as well as for business enterprise. As a student interested in international studies, with a goal of eventually... the age of...
5 Pages(1250 words)Term Paper

...﻿CASE STUDY ANALYSIS Case study analysis: Topol, E.J. (2004). Failing the public health -Rofecoxib, Merck, and the FDA. The New England Journal of Medicine, 351(17), 1707-1709 Shortcomings of the Skills and Traits of the Primary Leadership in the Case Study According to research, a skill is expertise, capability or agility that is attained or established through education or involvement (Bass, 2008). Skills are acquired over time and through practice, while a trait is something that a person has by nature. The traits of a leader are acquired through observing the achievements and failures of others, or even through direct experience and error practices; the experience of a person makes him or her to comprehend what it takes to be a leader... STUDY...
2 Pages(500 words)Essay

...Intelligence Testing Recommendations s Psychology Department 18th January In the present conditions of rather high demand for places in our further education institution, admission policy is to be reconsidered and elaborated more carefully in order to ensure high objectivity and better overall performance of our students. To achieve these goals, the practical aspect of admission needs to be complemented with an additional procedure allowing the college admission board to single out the candidates, who will perform the best in our college’s courses. The interview as a part of admission policy is a good criterion and tool for evaluation of a candidate’s abilities, but it might be impossible to identify one’s cognitive and intelligence... Testing...
4 Pages(1000 words)Lab Report
sponsored ads
Save Your Time for More Important Things
Let us write or edit the essay on your topic "S5W5DQs" with a personal 20% discount.
GRAB THE BEST PAPER

Let us find you another Essay on topic S5W5DQs for FREE!