Comments (0)
Add to wishlistDelete from wishlist
Cite this document
Summary
The prime objectives of this essay are to examine the core perspectives within the debate surrounding the failure of the Oslo peace process, to apply postcolonial theory to the analysis of the Oslo peace process, to identify the chief causes behind Oslo’s failure …
Download full paperFile format: .doc, available for editing
HIDE THIS PAPERGRAB THE BEST PAPER97.3% of users find it useful 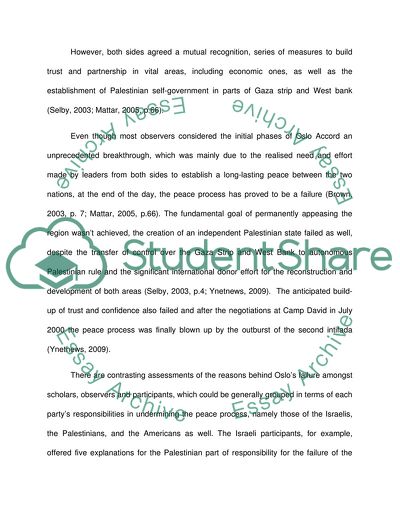 CHECK THESE SAMPLES OF Reasons of Oslo Peace Process Failure

Why did the Oslo Peace Process fail

...of the disturbance of territorial integrity for the emerging Palestine state (Clemens, 2004). By establishing Israeli military control over the West Bank and the Gaza Strip, the PA has supported the existence and legality of the Israeli presence in the area. The main task of the PNA police, including their security forces was to protect the Israel and its citizens over their Palestinian citizens. As a result, Arafat and PNA were placed in a situation of accountability to the US and Israel. Chapter III Why did the Oslo Peace Process Fail From the very start, the Oslo Peace Process was already flawed. Hence, it was more or less bound to...
18 Pages(4500 words)Dissertation

...? Failure of Oslo Peace Process Israel and the Palestinians conflict Before European colonized Palestine in1800, there was no Israel-Palestine conflict. Replacement and subsequent immigration of the Zionist into the Palestine land to make it their own resulted to increasing alarms and escalating waves of violence and fighting broke out. The conflict has been over borders, water rights, security, Palestinian freedom of movement, control of Jerusalem and solving refugee problem. Zionist claims that they returned to claim their ancestral land from Palestinians (Gelvin, 2007, p. 7). Complete dispossession of the Palestinian-Arabs from the land so that Israelis could inhabit...
5 Pages(1250 words)Essay

...The history of Arab-Israeli conflict Was the Oslo peace agreement failure Why Much has been said and discussed in relation to the Arab-Israeli conflict. Much has also been written as for the Oslo Accord and their role in the resolution of the conflict. The aim of this work is to reflect upon the consequences and the reasons of failure of the Oslo agreement process. The main conclusion is that Oslo peaceful agreement has really become total failure, but its flaws should be taken as lessons to be accounted in the future peace...
7 Pages(1750 words)Essay

The Failure of the Peace Process in the Middle East

...﻿The Failure of the Peace Process in the Middle East The book Shattered Dreams is an extremely informative and thorough report of seven key years in the record of the quarrel, from the murder of Prime Minister Yitzhak Rabin in November of 1995 and to the initial election of Ariel Sharon a bit more than two years before. Charles Enderlin is the Middle East Chief of government department for France 2 Television and has resided in Israel for more than a decade. The history for the breakdown of the Oslo Peace Accords from 1995-2002, the tale starts with the murder of Israeli Prime Minister Yitzchak Rabin. From the beginning, Enderlin grips our mind with his mixture of understanding stories and enlightening conferences... Intelligence...
4 Pages(1000 words)Essay

...Why has the Oslo Peace Initiative failed to achieve lasting peace between Israel and the Palestinians In order to understand the failure of the OsloPeace Accord (1993) between Israel and Palestine, it is imperative to know a brief background of history immediately preceding the peace initiative. This essay shall provide a brief history and then analyze the reasons for the failure of the peace process. Ever since the victory of the 'Six-day-war' or the War of Liberation in 1967, Israel's position became increasingly powerful in terms of self-defense and security. However, the joint effort of Arabs was defeated on all sides by Israel, and brought about a million Palestinian Arabs under the Israeli control (Isseroff, 2006... and...
6 Pages(1500 words)Essay

...1. Users failed to present absolute requirements. Hoffer (2002) explains that users for a system are the key deciding factors for the success of thesystem and prior to building of the system; they play a key role in identifying the key business processes and their working. Requirements gathering stages are ones which must be performed with greater skill for capturing the system requirements and business processes to every detail (Hoffer, 2002). The business requirements if not be captured distinctly results in failure of identifying the business workflow cycle and data flow model. If the requirements gathering stage is not taken care well then the entire development is a complete...
4 Pages(1000 words)Essay

...) With the weakening and demise of Arafat and the surge in violence between Palestinians and Israelis, the Bush administration adopted a more active role. In April 2003, the Roadmap was launched at the Sharm al-Sheikh summit, attended by President Bush and the Israeli and Palestinian prime ministers, Ariel Sharon and Mahmoud Abbas. The parties agreed to negotiate and undertake phased, time-bound actions to be implemented in parallel by both sides in order to progress to a stated and mutually agreed two-state solution by the projected date of 2005. (Indyk, p. 80) With the failure of the Roadmap, the Bush administration sought to re-activate the peace process in 2007 and in November...
5 Pages(1250 words)Essay

..., both sides have continued to derail the peace process (Nets-Zehgnut 115). This paper examines why the Arab/ Israel peace process has been elusive. Lack of give and take in the peace negotiation process Among the reasons why the Arab/Israeli peace has been elusive is because both sides are not ready to cede ground and hold defiant positions. The lack of compromises by both sides has continued to derail peace process because both sides consider their claims as genuine. Israel, for instance, is not ready to give up the territories claimed by the Palestine. As a result,...
7 Pages(1750 words)Research Paper

...Israeli-Palestine Conflict The conflict between Israeli and Palestine has been active for many years. It has been characterized by short bursts of peace agreements and assaults. The one question that seem to linger in the mind of the people is, “What is causing the conflict between these two nations?” It is imperative to understand that the discovery of oil and gas in the occupied territories has a significant impact on the conflict between Israel and Palestine. The paper discusses the current energy problems and solutions that might exist within Israel/Palestine. History has seen the Israeli and Palestine conflict unfold. It is a story that has been told for over fifty years. A myriad of reasons...
6 Pages(1500 words)Research Paper
sponsored ads
Save Your Time for More Important Things
Let us write or edit the essay on your topic "Reasons of Oslo Peace Process Failure" with a personal 20% discount.
GRAB THE BEST PAPER

Let us find you another Essay on topic Reasons of Oslo Peace Process Failure for FREE!